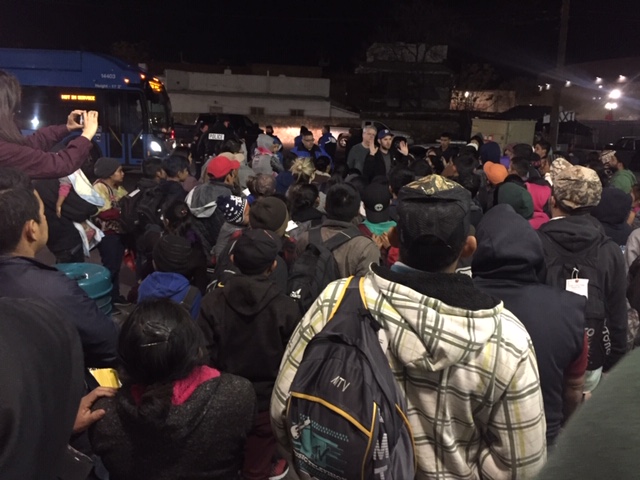 EL PASO – Here’s a sense of the scene Sunday evening at the Greyhound bus station about two hours after ICE dropped off more than 150 destitute, scared and confused Central American asylum seekers. Mothers traveling alone with small children clinging to them. Fathers traveling with children who are never more than inches away from each other.

Over and over they ask to use my phone. They have phone numbers memorized, or scrawled on worn scraps of paper for family or contacts in the U.S. I dial South Carolina, then New Jersey, Tennessee, California. “Where are we?” they each ask me as they talk to their connection. “El Paso, Tejas,” I tell them. They repeat it, trying to memorize it. Others around me do the same. “El Paso, Tejas.” They are all looking up at me, nodding, and repeating it like a mantra. The women are tiny and I’m taller than most of the men. They are afraid they will be taken back to ICE detention. As word of this crisis spreads, El Pasoans show up at the bus station with bottles of water, pizzas, fruit. The police are amazing, supporting the growing numbers of volunteers, trying to contact relief services. After almost three hours, at the time of these photos, the crowd is being updated on efforts to secure shelter for the night somewhere in the city. City buses are brought in so they have a place to rest and stay warm. The County Judge is onsite, along with the director of Annunciation House. Calls and texts furiously trying to find motel space, volunteers, support.

At 1 a.m. the buses were loaded and still waiting. This is Christmas Eve in America.

To help with donations that go directly toward shelter and logistics
https://annunciationhouse.org/financial-donations/

If you live in El Paso and are a restaurant or church organization that can prep and crew a meal service or, if you speak Spanish and can transport people to the airport and bus stations
email refugees@annunciationhouse.org

What I learned after wandering into a refugee crisis at the bus station downtown:

When undocumented migrants are processed by ICE and released, there is no formal support system to help them navigate the next steps to safely get to their families and sponsors. Community charities and immigrant advocacy groups have stepped up grassroots efforts to help. Their coordinators and volunteers are doing amazing work, but this latest surge is overwhelming the humble infrastructure of support here. In 2016 during the last big surge of asylum seekers from Central America the federal government set up a temporary processing site. But this time there is no such system in place.

In my few hours at a bus station in Downtown El Paso on the night before Christmas Eve, I learned just how complex it is for refugees to get to their next stop.

• Many don’t have phones, so they have no way of contacting relatives and sponsors to make travel arrangements. Pay phones are a thing of the past on most U.S. streets, so they can’t even make a collect call.

• They don’t understand long distance dialing once in the U.S. The scraps of paper they carry with phone numbers have the international prefix of 00. The numbers are sacred to them exactly the way they’re written down. Without a helpful local doing the dialing, their calls won’t go through.

• Even if they can borrow the phone, making flight or bus arrangements takes time and they may not have access to the phone for return calls. I don’t know the names of anyone who used my phone last night. I don’t know where they are now. This morning I keep getting calls from worried relatives and don’t answer because I can’t connect them and don’t speak Spanish well enough to explain it.

• Many speak primarily indigenous languages and not much Spanish. It is hard for them to communicate directions or instructions. They don’t know where they are.

• Many said they were dropped off without having anything to eat all day. Word went out and people showed up with pizzas, fruit, energy bars and water. The effort is helpful and immediate, but it is hard to coordinate random individuals.

• There are few flights and buses out of El Paso, so it can take days to get the next available seat. This means people are stranded here without money or a place to stay. They have no change of clothes. Some don’t have jackets or sweaters.

• The hospitality centers hosted by Annunciation House are full. The charity is now renting out hotel rooms and the money is running out. Every new busload of migrants dropped off means they are scrambling to find new spaces for 100-200 people. A huge amount of money is needed to pay for this.

• People need rides from the shelters to back to the bus station or airport when they get a ticket.

• They may need help with additional paperwork or understanding how to present themselves at checkpoints, such as the TSA at the airport.

My experience at the bus station reinforced my deep respect for the volunteers and advocates who have been working tirelessly since before the crisis ramped up this summer. I hear reports that our local community leaders and grassroots workers continue to work on a better infrastructure to get us through this surge. Meanwhile, I hope this helps give some understanding about why migrants don’t just simply check out of ICE once their paperwork is done and pop on a bus bound for family.