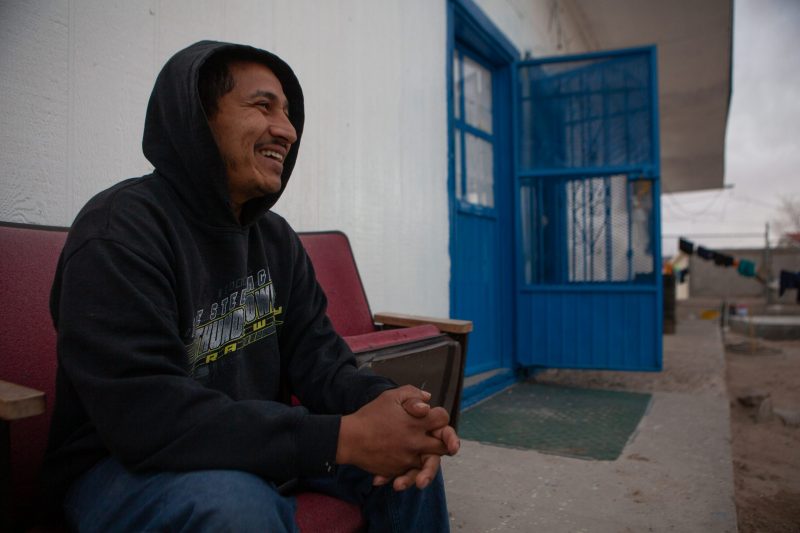 Migrants trapped in Mexico for more than a year by one of former President Trump’s most controversial policies rejoiced to the news Friday that the Biden administration was ending the so-called Migrant Protection Protocols and allowing people in that program to gradually come to the United States to pursue asylum claims.

“What did we feel when we heard this news? Joy!” said Jorge, a Guatemalan man who’s been in Mexico since July 2019.

“Because after being here so long, with this sickness we have (COVID-19), we don’t have the freedom to go out, it’s ugly here. But to have the news that they are going to start to let us cross to the other side, and to finish our process over there while being with our relatives, it’s a huge joy to know that maybe all this will finally be over. We are very happy, truly,” said Jorge, who has been living in a Juárez shelter and asked that his full name not be used because he fears for his safety.

Migrant Protection Protocols, also known as “remain in Mexico,” began in January 2019 and was part of the Trump administration’s strategy of deterring migrants from coming to the border by making crossings more difficult and more dangerous. Human rights groups said the policy of forcing migrants to stay in Juárez and other dangerous northern Mexican cities was inhumane, subjecting them to kidnappings, attacks, sexual assaults, threats and other cruelty.

“It’s been a very difficult two years. We’ve seen unbearable suffering from the people that we served. From kidnapping victims, rape victims, the most horrific stories, the people that are in remain in Mexico have lived through that. Our big frustration is that this didn’t come down soon enough,” said Linda Rivas, executive director of El Paso’s Las Americas Immigrant Advocacy Center, which has provided services to people in MPP.

The Department of Homeland Security will start allowing the approximately 25,000 people still in MPP with active asylum claims to enter the United States beginning Feb. 19. The Biden administration provided few details about the process of bringing MPP participants into the United States, other than to say it will be “safe and orderly.” The Los Angeles Times reported that they will initially come to the United States through ports of entry in El Paso and Brownsville in Texas and Calexico in California, with only a few hundred people allowed to enter per day.

Fatima, who asked that her full name not be used to protect her family, came to the border from El Salvador almost two years ago with her husband and three children. She is due to have a baby on Feb. 17, before the Biden administration plans to begin allowing MPP participants to enter the United States.

“We felt happiness because finally there will be justice. Because I believe that it was unjust that we have been here so long waiting,” said Fatima, who has been living in a Juárez shelter. “I would have liked the baby to born in the U.S., but I trust that God knows what he’s doing.”

Ending MPP fulfills a promise that President Biden made during the 2020 election campaign and restores long-standing practices of allowing people to live in the United States while pursuing asylum claims. But Biden administration officials are wary of sending signals to Central America and elsewhere that could trigger a migration surge similar to that seen in 2018 and 2019. That was reflected in Friday’s announcement of MPP’s demise.

“As President Biden has made clear, the U.S. government is committed to rebuilding a safe, orderly, and humane immigration system,” Secretary of Homeland Security Alejandro Mayorkas said. “This latest action is another step in our commitment to reform immigration policies that do not align with our nation’s values. Especially at the border, however, where capacity constraints remain serious, changes will take time. Individuals who are not eligible under this initial phase should wait for further instructions and not travel to the border.  Due to the current pandemic, restrictions at the border remain in place and will be enforced.”

The announcement on MPP also said “this announcement should not be interpreted as an opening for people to migrate irregularly to the United States.”

Most MPP participants allowed into the United States are expected to join family members throughout the United States. Those coming from Juárez may stay in El Paso shelters for a few days while their families arrange transportation.

The Biden administration said MPP participants will be tested for COVID-19 before being allowed to enter the United States, and will be required to wear masks and practice social distancing during processing.

Rivas of Las Americas Immigrant Advocacy Center said she was encouraged by the administration’s orderly approach to bringing people in MPP into the United States.

“This is beginning to restore our asylum system. We should be welcoming people who seek refuge in this country with dignity. This is a good first step but it can’t be the last step,” she said.

Seeking asylum is a legal means of entry into the United States. For much of the world’s population, it is the only legal means open to them.

More than 71,000 migrants were placed in MPP, according to the Transactional Resource Access Clearinghouse at Syracuse University, which tracks the federal court system. Almost 25,000 of those cases were assigned to El Paso immigration courts, the highest number for any city. Most of those people were sent back to Juárez.

Immigration courts stopped holding hearings in March 2020 because of the COVID-19 pandemic, leaving it uncertain when the asylum claims of many migrants would ever be heard.

Before the pandemic, almost 33,000 MPP participants were given what is known as a “removal order,” the first court step toward deportation. Only about 800 of them were represented by a lawyer, a much lower rate than for people who pursue asylum claims while in the United States. Attorneys said it was extraordinarily difficult to connect with potential clients in Mexico, and immigration courts prohibited lawyers from meeting with groups of migrants ahead of hearings to do a basic presentation on their rights.

Tens of thousands of migrants abandoned the asylum process after being forced to remain in Mexico, their advocates have said. An estimated 25,000 people — mostly from Cuba, Guatemala, Honduras and El Salvador — still have active asylum cases through MPP.

In El Paso courts, about 11,000 of the 25,000 people with MPP cases didn’t attend their last scheduled hearing and lost their claims in absentia. About 5,000 attended all their hearings and another 9,000 have never been given a hearing, according to TRAC data.

Attorneys and other advocates have said it is difficult for people to get from shelters and other locations in Juárez to the Paso del Norte Bridge at an appointed time for their hearings. It’s unknown how many people failed to show at court hearings because they were abandoning asylum claims and how many did so because they were unable to get to the bridge on time.

Officials have estimated that about 11,000 MPP participants remain in Juárez.

Cover photo: Jorge, an asylum seeker from Central America living in Juárez, smiles at the news that individuals in the “Remain in Mexico” process will soon be allowed to enter the United States. Jorge and his family fled their country after his wife was almost killed and have been in Mexico since July 2019. (Corrie Boudreaux/El Paso Matters)

This article first appeared on El Paso Matters and is republished here under a Creative Commons license.” data-src=”https://elpasomatters.org/?republication-pixel=true&post=9076&ga=UA-158587614-1″ />