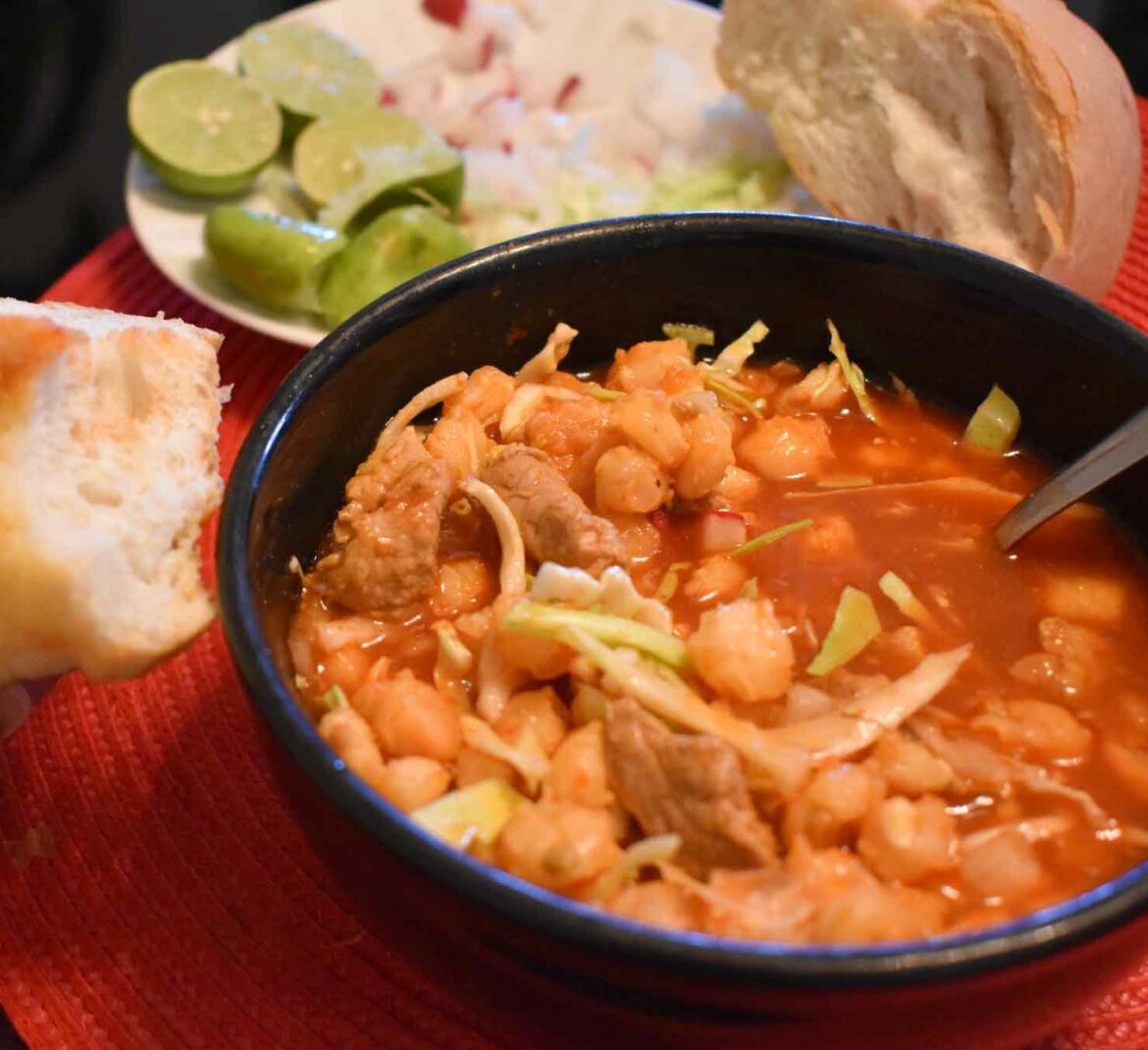 EL PASO — As chilly weather sets in and fall finally arrives in the borderland, so does the beloved tradition of making pozole.

Elva “Raquel” Salas, 60, sells the slow-cooked red chile and hominy stew from home on weekends to earn extra money. The mother of three and grandmother of eight works full-time at a power plant, but on Sundays she sells her homemade pozole to friends, family and others who don’t have time to make their own. 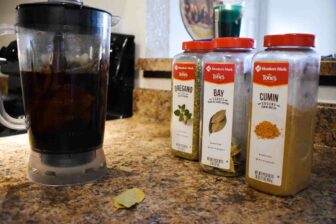 Red chiles are blended to make a sauce that Elva “Raquel” Salas uses with a mixture of seasonings to make pozole. Photo by Emilia Zubia, Borderzine.com.

Salas uses a recipe from her grandmother’s kitchen. She says it’s all about the seasoning. “It’s the pork meat with onion, garlic and salt. Then red chile ,the guajillo chile, a pinch of oregano, two basil leaves and a pinch of cumin, that’s what gives it a good flavor,” Salas said.

She said the secret is all about how you cook it. She’s secretive about her entire recipe but offered this tip: put the oregano in the pozole while cooking instead of adding it after.

With her $7 dollar liter bowl Salas has built up a loyal customer base. She does not deliver but has plenty of hungry customers happy to pick up their pozole from her doorstep. Due to the pandemic, she now asks customers to wear a mask.

Salas says that because it has been colder, more people are asking for pozole. And she has expanded to sell pozole on Saturday as well as Sunday.

But what exactly is this ancient stew?

Pozole is one of Mexico’s most beloved hot dishes as well as one of the oldest. According to research made by the Instituto Nacional de Antropología e Historia (National Institute of Anthropology and History) and the Universidad Nacional Autónoma de Mexico, pozole originated from the Aztecs and other indigenous people, historic texts say pozole used to be cooked with sacrificed human flesh.

Fortunately for us, the Spanish changed the human flesh to pork meat. Made from hominy, pork or chicken and your choice of sauce between, red or green Chile sauce or clear broth.

According to Culture Trip, a website for exploring cultures through food and travel, the variations on sauces used in different locations represent the colors of the Mexican flag – green (verde), white (blanco) and red (rojo). White pozole is more common in Arizona. Red dominates in El Paso.

Pozole is traditionally served with a side of warm white bolillo or tortillas to soak up the broth and is served with a variety of toppings that can be added to make this stew more flavorful. Some top their bowl of pozole with fresh diced onions, shredded cabbage, radishes, oregano and a squeeze of fresh lime juice. Others may prefer lettuce instead of cabbage.

When asked in an informal poll by this reporter on Facebook about what makes pozole so irresistible, people had a lot to say. 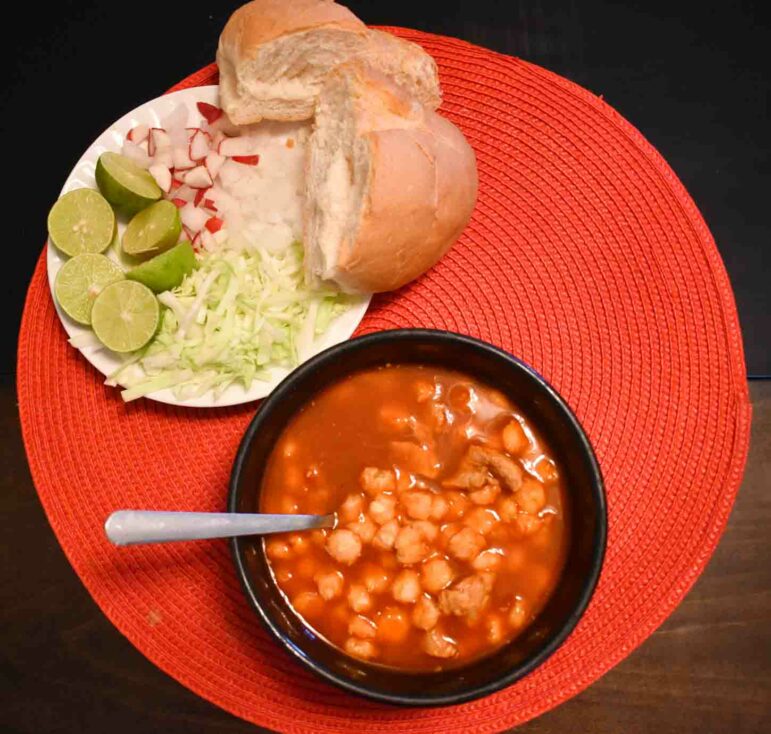 Pozole on the U.S.-Mexico border is typically prepared with a red sauce. It is served with a bolillo roll and garnished with shredded cabbage, radishes and lime. Photo by Emilia Zubia, Borderzine.com

Out of 70 people who answered this survey, 89 percent of respondents agreed that colder weather calls for the iconic Mexican stew. But, 7 percent of hard-core fans said any day is a good day for pozole.

Where can you buy pozole? 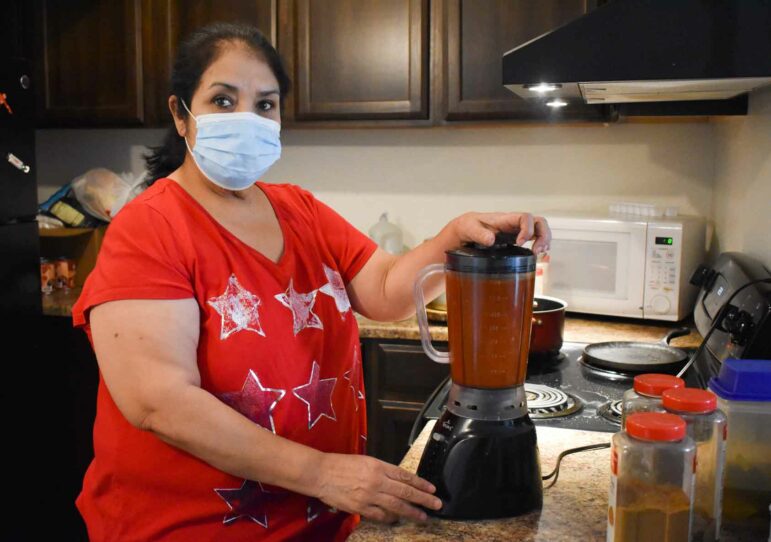 Elva “Raquel’ Salas blending the red chile sauce for the pozole she will sell. Photo by Emilia Zubia, Borderzine.com

But for the many who don’t have time to make their own, living in a border city is an advantage for pozole lovers. There are plenty of Mexican restaurants that sell it. According to Yelp, there are over 30 restaurants selling pozole in El Paso and 39 restaurants listed in Ciudad Juarez.

And these days social media is also a place where people are selling and buying pozole including in the Facebook marketplace. Elva says that going online has helped her sell more pozole.“Everyone is on Facebook these days,” Salas said.

Emilia Zubia studied multimedia journalism at UT El Paso. She served on the Borderzine staff in the fall of 2020.