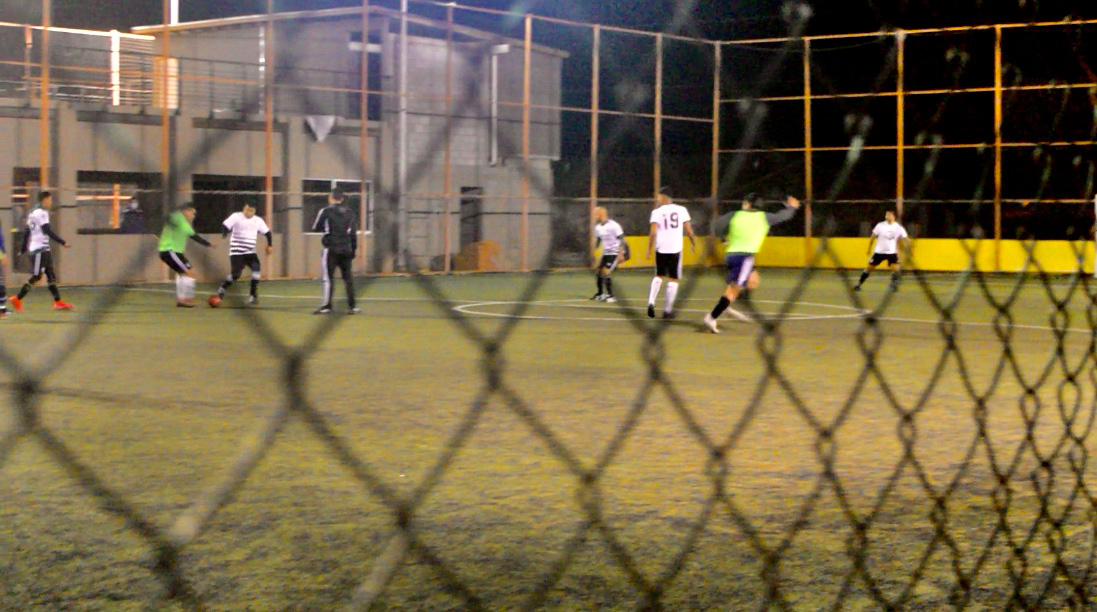 As COVID-19 arrived at the borderland, many of those who frequently cross from Ciudad Juárez to El Paso, but are not U.S. citizens or U.S residents, had to stay back in Mexico. For the Dynamo Futbol Club, a local amateur soccer team based in El Paso, that meant some of the players on the team that are from Ciudad Juárez were unable to finish the season.

Dynamo encountered many challenges as the pandemic of COVID-19 began in the spring of 2020. Eight players who lived in Juarez were not able to cross to El Paso, after the U.S. limited entry to U.S. residents and essential travelers, such as students. Players on the team range in age from 20 to 35 years old. The Dynamo Futbol Club has about 30 players because conflicts with work or parenting duties meant not all players could not attend all the games.

Dynamo coach Carlos Moreno, 24, feels he has big responsibility with his players. He is trying to keep the team united as the pandemic requires social distancing. He has noticed how some of the players have been affected emotionally by the pandemic. “They all want to play, but not all of them are able to play, so they are frustrated, upset,” Moreno said. 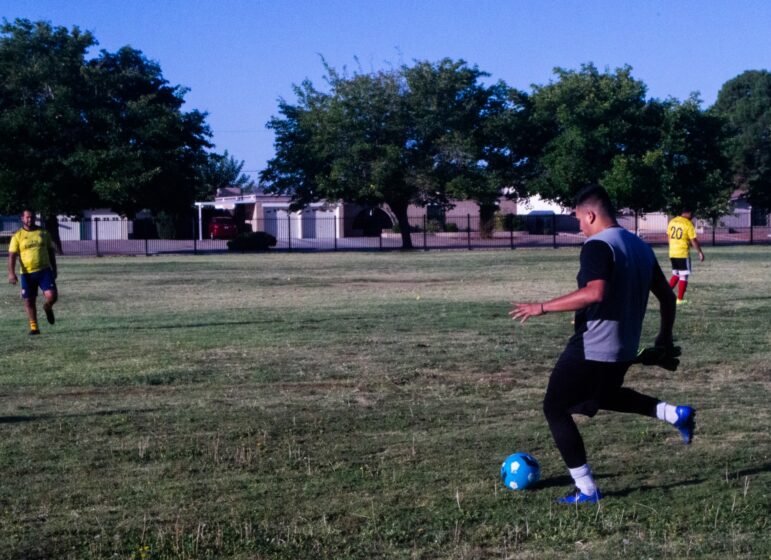 Frank Rodriguez, 23, goalkeeper of the Dynamo soccer team warms up before the game on Sept. 27,2020. Photo credit: Stephanie Chavez

The local amateur soccer team stopped playing for about three months, which gave the coach the opportunity to find new players.

“I had time to recruit more people, to reinforce the team with those seven, eight players that I was missing that were in Juárez, and it worked for us,” Moreno said. “They still need to adapt a little bit more, however they play good.”

Some of the players felt they declined physically during the break.

The majority of the players from Ciudad Juárez, requested some time off until they can cross the international bridges again. The order to limit non-essential travel at the border was extended to Dec. 21, but is likely to continue through the end of the year, depending on the circumstances regarding COVID-19.

“Patience, just have patience so that as soon as they open the bridges, they still have their spot on the team,” Moreno said. 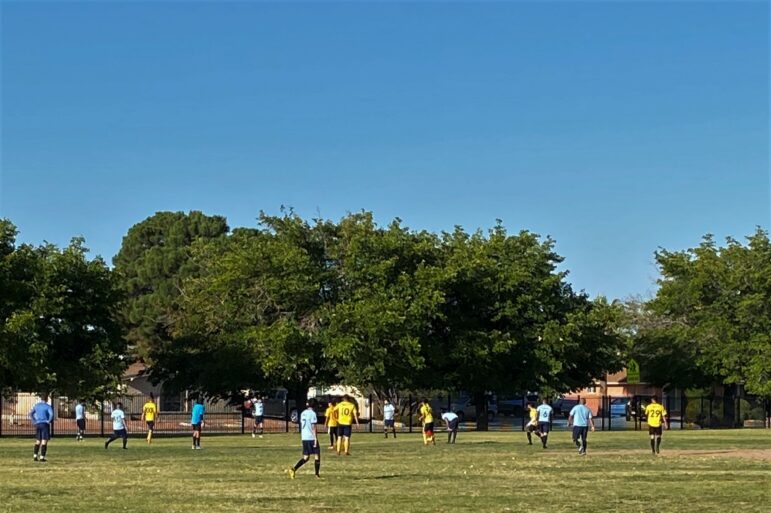 Another challenge the team encountered was that some of the players were scared of going to the games because they did not want to risk themselves and their families to exposure to coronavirus.

Jesus Cortes, 24, who has been playing for Dynamo for a little less than a year said when the pandemic hit players stopped gathering together after games. Then, Cortes said he stopped attending games for a while.

“I wasn’t really coming out the first few weeks, I was a bit scared you know. I mean I didn’t mind getting sick , you know most people get sick and stuff. But, I was just thinking of not getting my parents sick, just because I want to come to a soccer game,” Cortes said.

As the team went back on the field in September they followed precautions, such as keeping their distance of 6 feet apart and using of hand sanitizer.

“I do think about it when I’m out in the field , you know clashing into other players, thinking that they might have the COVID. But at the same time you know you got to move on you gotta start living life, I can’t stop my whole life just because of this,” Cortes said in September. 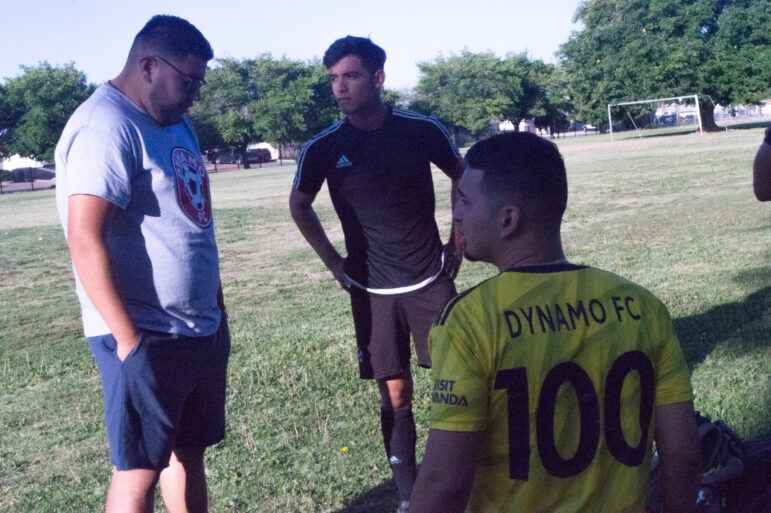 Coach Carlos Moreno,23, talking with two of his players before the game on Sunday, September 27,2020. Photo credit: Stephanie Chavez

In October, Dynamo Futbol Club won the Dragon Cup Category A championship, according to its Facebook page.

Meanwhile, Moreno continues to try to keep the team connected through text messages and phone calls and hopes to continue growing the roster.

“God willing, everything will go back to normality,” Moreno said.

Stephanie Chavez majored in multimedia journalism at UT El Paso. She was on the Borderzine staff in fall 2020.