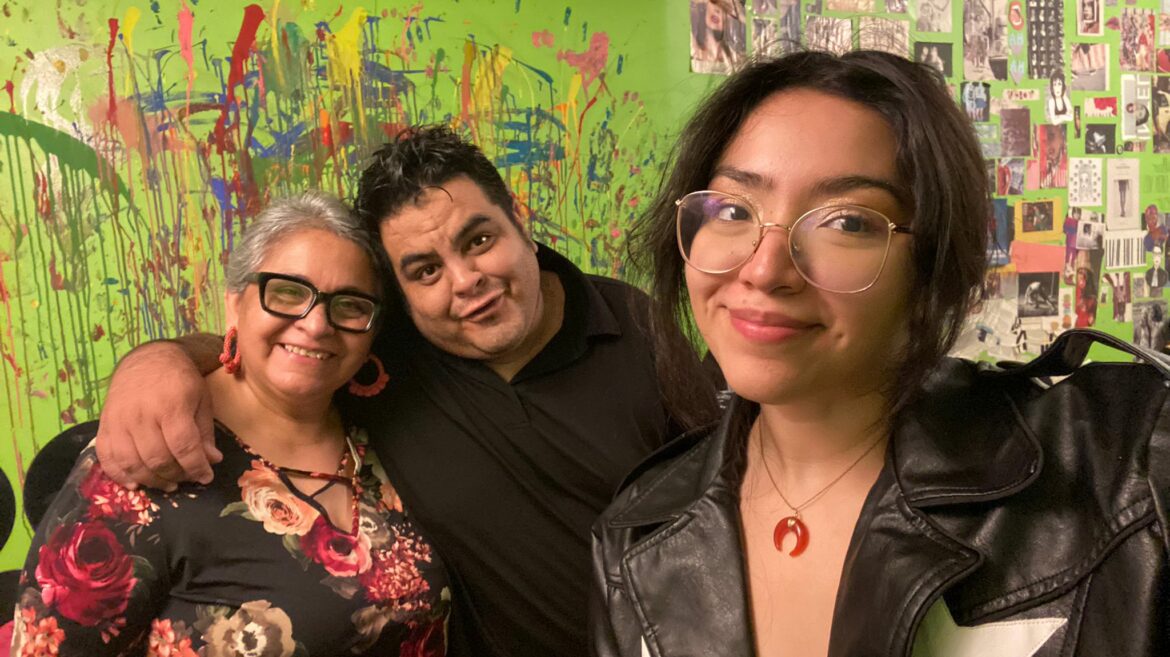 Four years ago my family in Mexico supported my dream to come to El Paso for my college education in the United States. Little did we know that we would struggle with the burden of being separated by the pandemic when the U.S. and Mexico restricted travel across land border crossings to essential reasons. Visiting family was not among the essential reasons for crossing back and forth.

Both my mom, Patricia, and my brother Christian are Mexican citizens. We were all born in México. The only difference is that at the age of 17 I became a naturalized U.S. citizen since my dad is a U.S. citizen.

My brother is married to a U.S. citizen and in the middle of the process of becoming a U.S. resident, which was delayed during the pandemic.

My mother is a Mexican citizen and before the pandemic she crossed every week to help take care of my nephew. After the announcement of the closing of the land borders to people visiting family, she stayed at home in Juárez. My brother stayed with her initially. 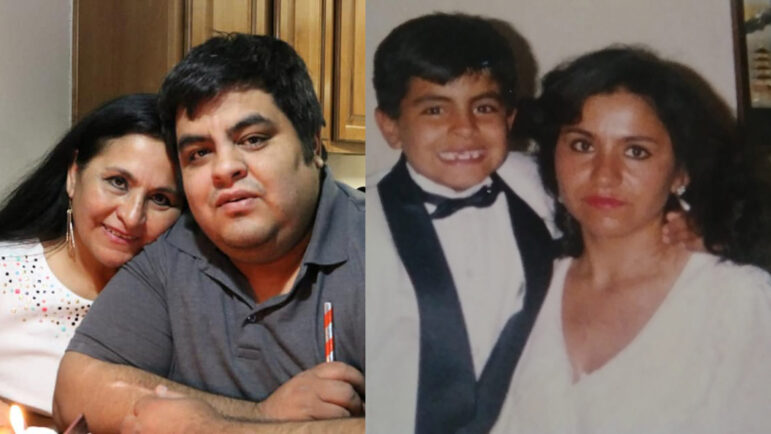 My mom Patricia Mitre and Christian Mitre in one of the last photos taken before the border lockdown. Photo credit: Patricia Estefania Morales Mitre

But as months went by and the pandemic continued, my brother was able to get permission to cross into El Paso to be with his wife and children, including a new baby. But he could no longer cross back and forth. So July 2020 was the last time my brother hugged my mom.

For approximately 15 months, my mother and brother didn’t have any in-person interaction despite the fact that they lived only nine miles away from each other. 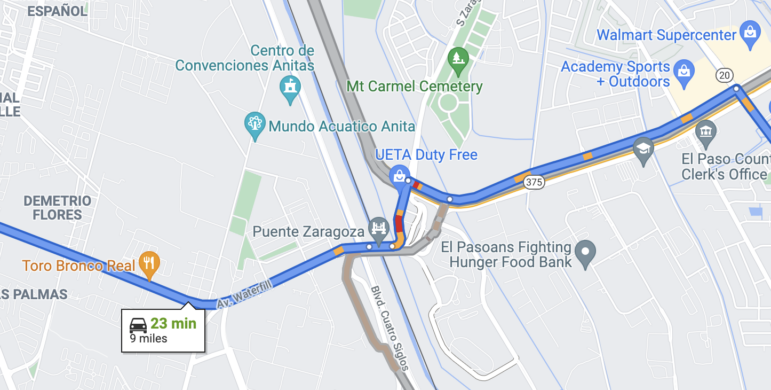 My brother and my mom were separated for 15 months even when they live nine miles away from each other.

Those months were a confusing time for me, I moved back to my mom’s house around September 2020. Because education was among the essential reasons permitted for crossing the border I could still go back and forth. Plus, U.S. citizens who visited Mexico during this time were not stopped from returning the United States.

For a brief period I divided my time between my brother’s home in El Paso with his family and my mom’s house in Juarez.

My mom and brother had been my whole existence. They are everything that I have. There were times when they had conflicts and even though they wouldn’t tell me, I knew right away when they had disagreements. I often found myself the bridge of communication between them because they couldn’t see each other face-to-face to discuss problems.

It was also hard not to be able to get together for family events. Sometimes though, it worked out for me. Like on my birthday when my mom threw a small party in her house and then my brother also bought me cake and ice cream for my birthday and I celebrated with his family. I have never eaten that much cake in my life. 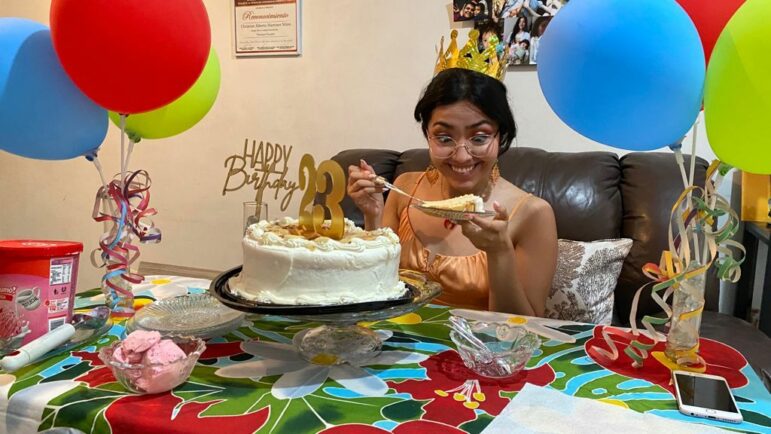 On the downside, my mom didn’t get to attend her grandchildren’s celebrations like birthdays. She missed milestones including seeing her granddaughter take her first steps.

When the border closed in March 2020, my niece was eight months old. Bringing her to visit my mother was not easy because both of her parents work and have a busy schedule. My brother delayed my niece’s baptism until September of 2020 hoping the border would open so my mother could attend. But at fourteen months old, way past due according to Catholic Church standards, he finally went ahead with the baptism. 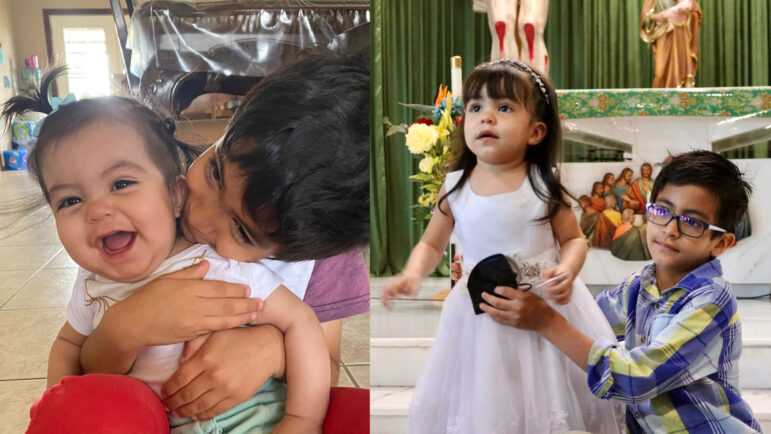 Camila Mitre (niece) and Santiago Mitre (nephew) during the pandemic in May 2020 and during Camila’s baptism in September 2021. Photo credit: Patricia Estefania Morales Mitre

My mother joined us virtually via video chat for the celebration afterward.

She wouldn’t say anything but I could see in her eyes the sadness she felt not spending time with her grandchildren. She used to ask me how her rapidly granddaughter was doing. “Oye, qué hace la Gorda?” She used a common term of endearment for chubby little babies.

One thing I noticed throughout the pandemic is that everyone experience video call tiredness. We all kind of built our lives around being isolated and navigating through COVID-19 safety protocols. In the beginning all was fun and novelty as we never got to be at home and have time to reflect. And there was hope. As months progressed, at least my family, got used to the routine and adapted. We adapted to being on own our own and apart from each other. 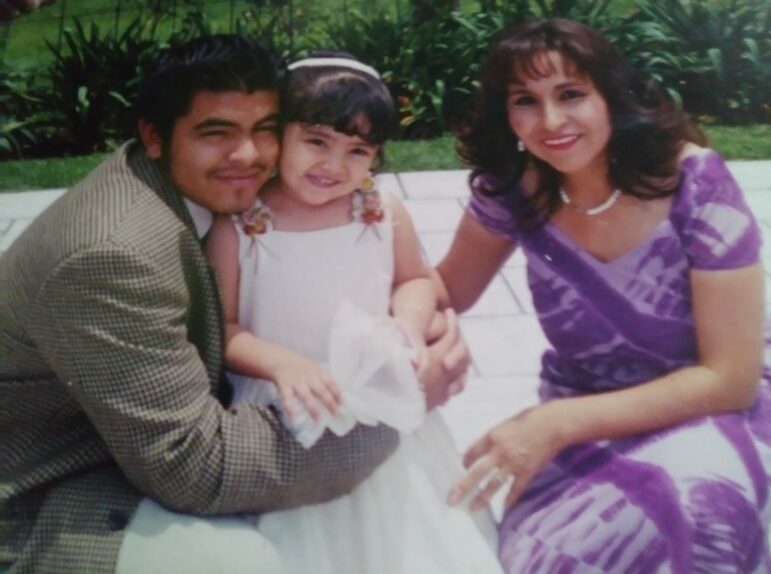 My brother Chris Mitre, myself and my mom have been through thick and thin. They raised me and taught me everything I know. Photo credit: Patricia Estefania Morales Mitre

It was also a point of self discovery for me as I knew I was approaching graduation. I wasn’t satisfied with the new dynamic, it didn’t sit right with me. Yet, none of us could do anything about it. The border restrictions mean my family was divided.

I have always seen my mom, my brother and I as the three musketeers – a single mom and her two children with a 13 year age gap. We learned to rely on each other.

By September of 2020, my brother’s residency process was still uncertain. My brother always jokes about how the American government has everyone’s livelihood in their hands. A letter from U.S. Citizenship and Immigration Services can easily shift your mood and define your destiny. A day in late September he was notified that his interview for his green card was scheduled for mid-October. But there was were new threats of a government shut down looming. If that were to happen, my brother’s residency process would have been delayed once again. 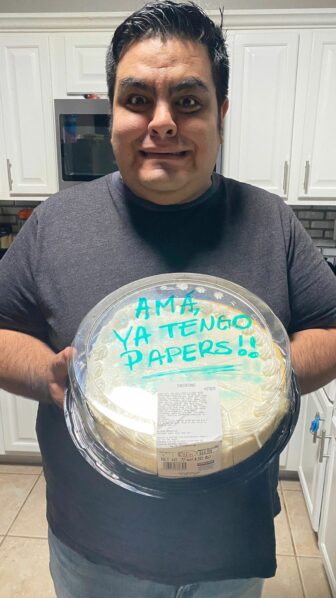 “Mom I have papers!,” Christian Mitre celebrates the arrival of his green card.

Fortunately that didn’t happen and a few weeks later he received his green card in the mail. Just as he said, that acceptance letter changed his life. My brother received the green card on a Saturday afternoon. Once it arrived he asked me to take him to my mom’s house – she didn’t know he had his legal U.S. residency and could visit her in Juarez.

The reunion was emotional. For me it was a huge relief. It felt like closing cycles and taking a huge weight off of my shoulders. For once I felt like everything was returning to normal. We are family, of course we will have our little fights now and then, but at least we can all argue in person again.

Now that we’re back together. I am the one leaving the nest and moving way from the border. I’ve just graduated from the University of Texas at El Paso and have a new job in a new city, Washington D.C.

I feel safer and more confident leaving, knowing that there are no physical borders or restrictions keeping my family apart.