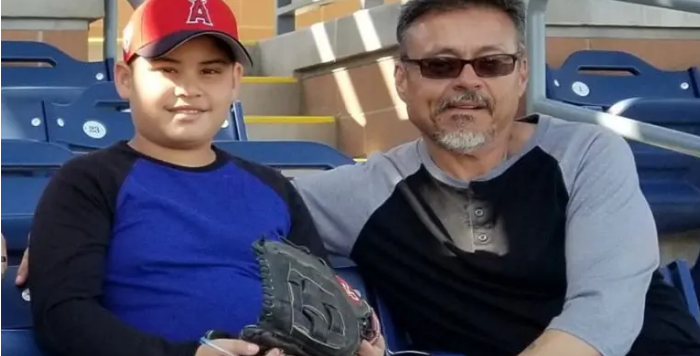 Like most people, Ana and Eddie Gonzalez closely followed developments as COVID-19 swept across the globe.

“I remember having discussions with my husband about how sad it was that people were going into the hospital and nobody could go and see them, and that people were dying alone,” said Ana, who works in a truancy prevention initiative for El Paso Independent School District.

They took precautions to protect their family from the novel coronavirus.”Every time we went to a store, we always wore a mask, even before the order came in. We were even wearing gloves. I had sanitizer in my purse. It was constant,” Ana said.

As COVID-19 spread through El Paso, Ana worked from home. Eddie was a superintendent on a remodeling project for Centro San Vicente, a health clinic in the Lower Valley. He and his crew used N95 respirator masks to protect themselves.

“I can tell you that he was very fearful, especially because he was working at San Vicente. It’s a (COVID-19) testing site, you know,” Ana said.

Despite every precaution, the merciless virus found its way into the Gonzalez home, killing Eddie and shattering their lives. Ana shared her family’s story on Facebook earlier this week. Her post has been shared more than 4,000 times.

“I want people to know how powerful and deadly this virus is,” Ana said in an interview with El Paso Matters.

Eddie and Ana met 15 years ago when both were working for Region 19 Head Start. Both had children from previous relationships. They fell in love and had a son, Angel, in 2007.

“They were buddies. Oh, my Gosh, they were inseparable,” Ana said of her husband and son.

Softball was a big part of Eddie’s life. He played with his two brothers on the Angels, a team in an over-50 softball league. Angel would go to his father’s games. “My husband was an excellent player. He never played baseball in high school, but he used to play with the Indios in Juarez. He was even scouted to play in Monterrey,” Ana said.

Eddie was diagnosed with diabetes four years ago and quickly changed his lifestyle. He cut out sugar and began exercising more, shedding 50 pounds.

“He was just active. He was very active. We have a Bowflex over there in the backyard. We have a treadmill and he would run,” Ana said.

Fatigue, and then a crisis

“But I was attributing it to work because (working from home is) very different than being out in the field, because I still had responsibilities here at home, to do the wash and the cooking and everything,” she said.

The next day, her 53-year-old husband came home from work early.

“He said it’s because one of the guys, a young 20-year-old guy in his crew, started feeling sick, flu-like symptoms. And he had gone to the doctor and the doctor referred him for the test for the virus. And so my husband decided to send his crew home until this guy got a result,” Ana said.

Eddie complained of a headache and went to a clinic on Friday, April 24. He was diagnosed with a sinus infection and given an antibiotic. He didn’t meet the requirements to be tested for COVID-19, his wife said.

On the night of Saturday, April 25, Ana’s condition worsened.

“I started with these severe body aches and I couldn’t sleep all night,” she said. “And I thought that I had the flu because I had gotten the flu like four years previous and it felt very similar.”

Ana also had a sore throat and a slight cough. She said the possibility of COVID-19 didn’t occur to her because she didn’t have a fever or trouble breathing. Ana and Eddie stayed apart from each other. They also stayed clear of Angel and Sophia Armendariz, Ana’s 19-year-old daughter from a previous marriage who lived with them. They wore masks in the house.

But Ana’s health continued to deteriorate over the weekend and she decided to go to a medical clinic on Monday, April 27. She cracked open her husband’s bedroom door to tell him she was going for treatment.

Ana got a COVID-19 test at the clinic. Two days later, the clinic called. She was positive.

Ana and Eddie get worse

Ana was feeling increasingly ill and has vague memories of the days immediately after learning she was positive. She doesn’t remember if she asked her husband if he was going to be tested.

“I was in tears because I was in such pain,” she said.

Eddie called his brother-in-law to help build a quarantine area for Ana. They draped frosted plastic sheets from ceiling to floor to create an isolation space in the living room. She could now only see shadows of her family. They would have contact only by video and text messages.

“But I could hear his cough and it was getting worse and worse. And then I could see that when he was talking to me, he was running out of breath. I kept on telling him, you’ve got to go to the clinic, you’ve got to go Eddie. And he kept telling me, ‘No, I’m fine. I’m fine,’” she said.

Relatives have started a GoFundMe campaign for the Gonzalez family here

Eddie became increasingly slow in responding to her texts. On Saturday, May 2, he told her something that she later recognized as a worrisome sign.

“He told me, ‘I asked my brother to bring me a watermelon.’ And at the moment, I didn’t think twice about it. But when my husband was told he was diabetic about four years ago, he completely gave up sugar,” she said. “But I’m thinking about it after the fact, I thought what was going through his mind? Something was happening to his brain, because of the fact that he wasn’t responding to me. The fact that he even decided to have watermelon, something that to him was poison to his body.”

Ana continued to feel worse and drove herself to University Medical Center on Sunday, May 3. She struggled to walk even a few steps, but she felt no one else could safely drive her because of her COVID-19 infection.

During her treatment, she told the medical staff about her husband’s cough. They told her Eddie had to come in immediately.

When Ana returned home after her treatment, she told Eddie to go to the hospital. Eddie struggled to get dressed and find his keys. It took him 25 minutes to get his truck out of the driveway, Ana said. His brother followed him to make sure he got to UMC.

A few hours later Eddie texted that he was being moved to the intensive care unit for better monitoring. “So I’m thinking, he’s going to get fixed. They’re going to help him,” Ana said.

At 4:30 the next morning, Monday, May 4, Ana got a call from a nurse telling her that Eddie was being put on a ventilator to assist his breathing. The nurse put Eddie on the phone to speak with Ana.

It was their last conversation.

Hopes for a miracle crushed

A few hours later, a nurse called Ana to tell her Eddie had gone into cardiac arrest.

“At that moment, I didn’t grasp what they were telling me as far as cardiac arrest. To me, I thought he was having a heart attack. And what they explained to me later on, a few days later, is that his heart had stopped,” Ana said.

Eddie was revived with cardiopulmonary resuscitation, but he went into cardiac arrest again on Tuesday, May 5. Ana was disoriented by her own battle with COVID-19. She couldn’t fully comprehend what doctors and nurses were telling her about Eddie.

“The doctor told me, ‘Your husband has brain damage because of a lack of oxygen.’ And I kept on telling her no, Ana said. They asked if she wanted them to continue resuscitation efforts. “And I said absolutely. My husband is not going to have a third (cardiac arrest). I know he’s not. I said, my husband is going to be a walking miracle. He’s going to get out of that hospital. He’s going to blow your minds.”

On Thursday, May 7, Ana talked with a nurse named Gustavo.

“He said, ma’am, I have been a nurse for over 20 years. He says, I’ve seen miracles. And then he says, but I know what I see in front of me. Your husband is not going to survive,” Ana said. “And even then, I said, no, God has the last word.”

A mother unable to comfort her son

At about 9 a.m., as 12-year-old Angel prepared for his online classes, Ana broke the devastating news that his father had died.As had been the case for more than a week, Ana could not come near her son for fear of exposing him to the virus.

She called a pastor at their church, Abundant Living Faith Center, to pray with them over the phone.That brought them some comfort. Later that evening, Angel was sitting at the table and Ana was on the sofa.

“He had his phone and I kept on seeing him looking at this phone. And I said, what are you doing? And he said, ‘I’m calling my Dad.’ And he started crying and he was saying, ‘Dad, please answer your phone. Please, Dad, answer your phone.’ And that was heartbreaking because once again, I couldn’t get near him,” Ana said.

Within three days of Eddie’s death, Angel and Sophia both tested positive for COVID-19. They are currently asymptomatic but quarantined until May 22.

She is still suffering after-effects of her own battle with COVID-19. Walking a few steps to her bathroom leaves her exhausted. “It’s a very strange feeling that I have inside my body. I feel like I’m trembling, like my entire body is trembling.”

Ana still has to keep her distance from Sophia and Angel, even though they have all now tested positive for COVID-19. Sophia’s doctor “told her that it was very important for them, my kids, to keep away from me, for us to be wearing gloves at all times because they don’t know if there’s a possibility I can get reinfected,” Ana said.

Eddie was cremated, but funeral plans are still up in the air.

Ana finds herself thinking back to the moment when Eddie was sedated so he could be intubated. “I think what would mean that when my husband closed his eyes, the next thing he knows is he’s in heaven. Because we’re believers and we believe that he’s in heaven. And that’s what I managed to tell my son. Close your eyes, picture it, picture your Dad walking into heaven. And Jesus is with his arms wide open ready to receive him.”