Daniella Perez, a 22-year-old waitress and UTEP student, lost her job when restaurants closed in mid-March as COVID-19 began spreading through El Paso.

“Honestly I’m still kind of in shock. I can’t believe this whole thing. I have been trying to look for more income, but I’m scared because I live with my Mom,” Perez said.

This first wave of COVID-19 job losses led more than 50,000 people in the El Paso area to file unemployment claims between March 1 and May 1, according to data from Workforce Solutions Borderplex. The job losses disproportionately impacted young women like Perez.

Women accounted for less than 47 percent of El Paso job holders, yet made up 51 percent of new unemployment claims. And while people under age 25 held fewer than 10 percent of jobs in El Paso, they made up almost 24 percent of those filing for unemployment. Women also have borne a higher rate of job losses than men across the country.

“This economic crisis is very different from other crises that have occurred, like the downturn of 2008 — that mostly affected men, because men make higher incomes,” said Sylvia Acosta, CEO of the YWCA of the El Paso del Norte Region, which focuses on the status of women in the community. “COVID-19 has impacted people at every level, but particularly people at the lower income level. And women tend to work in positions that are lower paid and are also very customer service oriented.”

The COVID-19 jobless crisis has again highlighted El Paso’s employment structure, which pays wages well below other regional cities and relies heavily on hospitality and retail jobs. Women make up the majority of employees in those sectors in El Paso, and they were the hardest hit in the initial closures caused by COVID-19.

“There are a lot of women in the service industry. I guess it’s more aesthetically pleasing to have a woman behind the bar?” said Carleigh Hernandez, a 27-year-old bartender at Neon Rose in Central El Paso. “I’ve always seen that, or you have men who are barbacks but they’re not really front of the line. It’s easier to bring in more money if you’re a woman.”

Hernandez, who was a waitress before becoming a bartender, said gender norms influence tip-based work. “You have to bite your tongue a lot of the time, especially with waitressing. You gotta put on a smile. As a woman it’s a little tough sometimes, especially with men, because a lot of the time they just think they can do whatever they want, and talk to you the way that they want. And it makes you really uncomfortable.”

Before the pandemic hit, 24 percent of all El Paso jobs were in retail trade (clothing stores, groceries, etc.)  and leisure and hospitality (bars, restaurants, hotels, etc.), according to the U.S. Bureau of Labor Statistics. Nationally, about 21 percent of jobs were in those sectors, which were among the hardest hit by COVID-19 closures. 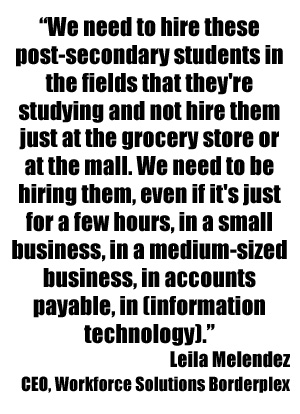 “We’ve put a lot of effort into target industries and there’s been a lot of effort into retail and those types of amenities for the community, which is fine. But the data is showing that occupations in those industries are the most hurt,” said Leila Melendez, CEO of Workforce Solutions Borderplex, which helps employers finding employees and trains workers in workplace skills.

Even as service industry jobs come back, workers are taking a significant hit in terms of diminished hours and lost wages. Fabiola Mendez, a single mother of three kids and waitress at a restaurant in El Paso’s West Side, has seen a major reduction in tips and hours since coming back to work.

“I went back to work last Friday and the pay is the same, $2.15 (per hour) plus tips, but the tips aren’t great because people don’t realize we’re making so little. My family can’t live off that, working just two days a week,” she said. In Texas, the minimum wage generally is $7.25 an hour but is set at $2.13 an hour for workers who receive tips.

Mendez had been working five days a week before the COVID-19 pandemic, and used to make $200 per shift on a good night. This past weekend she made only $18 in tips during one six hour shift.

El Paso, like most communities, has focused economic development strategies on growing and attracting specific industries viewed as a good match for the local economy. But Melendez has been saying that El Paso should broaden its focus in a way that places a priority on increasing wage levels. The impacts of the pandemic reinforce that need, she said.

“Our strategy now looking forward is how do we focus our training and our systems and our vision and everything into occupations versus industry,” Melendez said.

For example, many of the people who lost jobs as the pandemic set in were college students working in the hospitality or retail industries. “We need to hire these post-secondary students in the fields that they’re studying and not hire them just at the grocery store or at the mall. We need to be hiring them, even if it’s just for a few hours, in a small business, in a medium-sized business, in accounts payable, in (information technology),” Melendez said.

She said local governments should prioritize certain higher-paying occupations when creating incentive packages for businesses looking to expand in or move to El Paso.

“A company has a staffing table. So then you look at all of the different jobs that they’re going to create and hire, and then you can really categorize those types of jobs and say these jobs that are in, let’s say, STEM or in advanced occupations, those are the ones that we will incentivize more,” Melendez said.

Higher-paying jobs don’t all require college degrees, she said. Many require advanced training or a certificate that are in the reach of El Pasoans who have completed high school.

El Paso’s economic development challenges are often described as a chicken vs. egg problem. Many higher paying jobs require higher skill levels, but many El Pasoans with college degrees or advanced skill training leave El Paso in search of better paying jobs. Melendez comes down clearly on one side of this discussion.

“We grow our eggs and they leave because we don’t pay them enough here,” she said.

One lesson from the pandemic is that El Paso will have to re-examine its economic and workforce development plans, Melendez and Acosta of the YWCA said.

A major concern for working women in El Paso has long been the availability of child care.

“Since the virus started, the main thing that has affected me has been the day care closing, because I have three kids. one is 10, one is 8, and my little girl is 5,” Mendez said. Now that Mendez’s restaurant is reopening, she’s scrambling to figure out child care for her kids.

“Not only are they taking care of children, but they’re also in many cases taking care of their parents. And so when there is an economic disaster like the one that we’re currently living through, it doesn’t just affect the woman. It affects several generations, the next generation, which is her children, and the previous generation, her parents,” she said.

Acosta said one of her staff members recently went to a fast-food restaurant and noticed three children outside the restaurant.

“The woman that was giving her the food said, ‘Don’t say anything but that’s one of our employees’ children. But she has nobody to leave them with and she can’t leave them with her parents because they’re older and she’s afraid of getting them sick.’” Acosta said.

The YWCA employee helped connect the woman to child-care services available for essential workers, Acosta said. But she said other families often aren’t aware of available services, and because child care availability has declined due to COVID-19.

Acosta said “economic recovery is not possible without adequate child care.” But many child-care providers were forced to close temporarily as COVID-19 spread. “And I will tell you that many of them will probably not survive this pandemic,” she said.

Before the pandemic, YWCA child- care facilities served 2,500 children a day. That’s now down to 250 a day. “The financial ramifications of this pandemic have hit nonprofits really hard because of the reduction of revenues that we’ve experienced since March,” Acosta said.

“I think the YWCA is large enough that we’ll be able to survive this. We’ll weather this storm. It’ll be very painful, but we’ll weather it. But other child cares may not. And people depend on child cares,” she said.

A decline in available child care will put more El Paso families in a tenuous position, Acosta said. “If I don’t want to send my daughter to child care, I don’t have to because I can afford not to, I can work from home. But if a grocery store worker or a housekeeper, or an LVN or somebody who works in a hospital, they have to go to work. They don’t have that option.”

As businesses reopen, workers may find themselves in a difficult position of choosing between safety and income, one that is even more difficult for those with children or elderly family members in their household.

Hernandez, the bartender, said she would be willing to go back to work if Neon Rose reopens.

“Hopefully we can all get back to work soon. But I’m just concerned about our patrons’ health, our regulars’ health. It’s scary to think that, even though you’ll have a 20 person capacity, there will be a chance that you’ll likely get sick, or someone there will likely get sick, and that’s a scary thought. It would just really suck to put anybody at risk like that.”

Robert Moore contributed to this story.

This article first appeared on El Paso Matters and is republished here under a Creative Commons license.” data-src=”https://elpasomatters.org/?republication-pixel=true&post=4387&ga=UA-158587614-1″ />