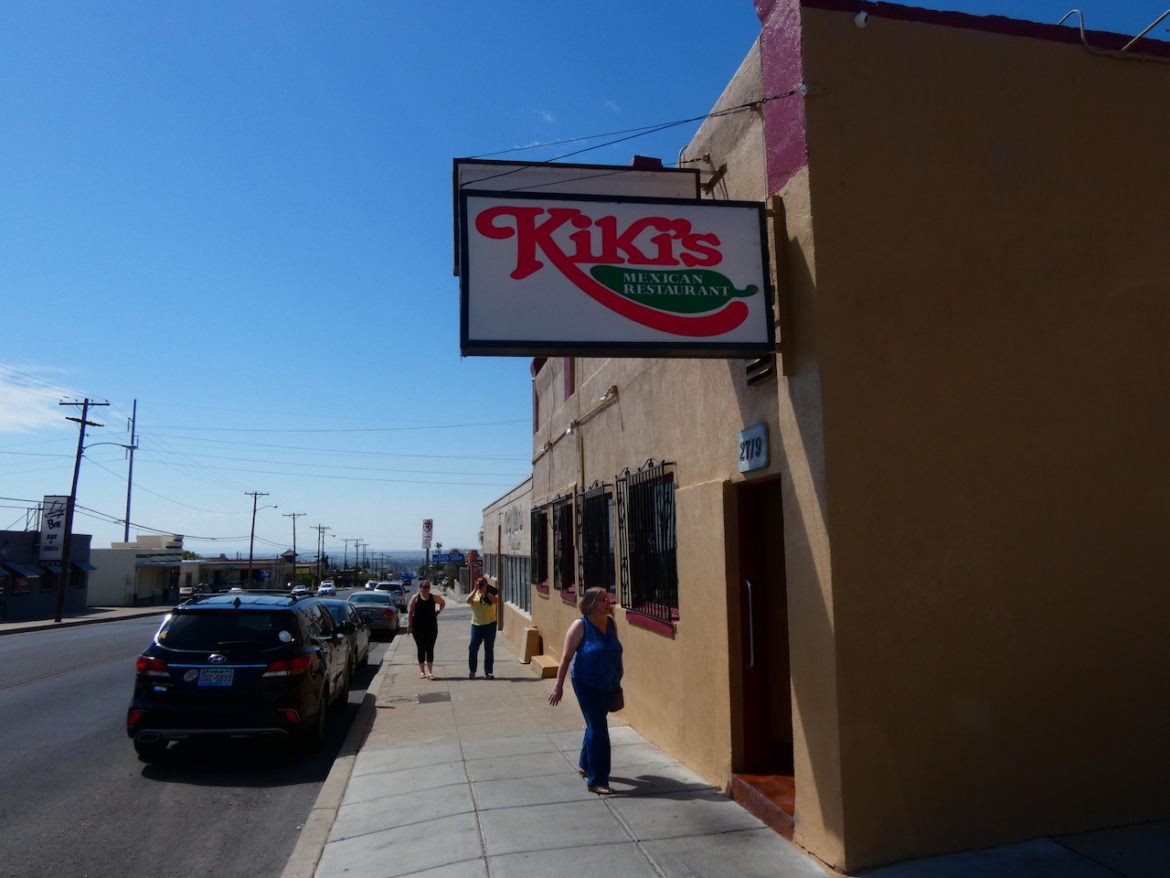 El Paso is a city packed with mom-and-pop Mexican restaurants – humble spots tucked in amid neighborhood shops that many non-locals might not even notice as they drive by. Places, like Kiki’s at 2719 N. Piedras. It is off the beaten path, but after more than 40 years, this Central El Paso eatery has grown into a local institution that attracts fans from across the city.

Kiki’s Mexican Restaurant and Bar was established by Paula Yardeni in 1976. The name Kiki’s comes from Yardeni’s daughter who was just a toddler at the time. While Yardeni was in charge of running the restaurant, Hector Latigo, 57, came on board as assistant manager in 1985.He worked his way up to manager and, when Yardeni retired in 2011, he bought the place, fulfilling his high school dream of owning a restaurant.

“I was born and raised in South Texas and had been working in restaurants my whole life. One weekend about 40 years ago, I came to El Paso to visit my sister and I instantly fell in love it with. I was surprised by the feeling of community and togetherness, the likes of which I had never experienced,” Latigo said. “I moved here as fast as I could and started working in a few other restaurants before I finally found my home at Kiki’s.”

The dining room is filled with tributes to and from the community. Polaroid photos of patrons hang on the walls next to the booths. Elsewhere, the walls are covered with thank you letters from dozens of schools, veterans organizations, and non-profit organizations alongside framed news articles and even notes of thanks from local and national celebrities.

Latigo said he always strongly believed in giving back to the community. “We’ve done a lot of fundraisers for schools, from elementary to high school. But I also like to get involved with all sorts of, not just schools, but other organizations, and to anyone that comes in and needs a little assistance,” he said.

His most popular fundraiser is selling green chile enchilada plates and donating a portion of those proceeds to a worthy cause.

“It’s so much more meaningful to give back to the community and know that part of our proceeds are benefiting the people who support us; rather than pay for a commercial. A majority of our business comes from word of mouth,” he said.

The restaurant has also received raves in regional and national publications. It was named one of the 50 Best Hispanic Restaurants by Hispanic magazine and has been featured on the Food Network. 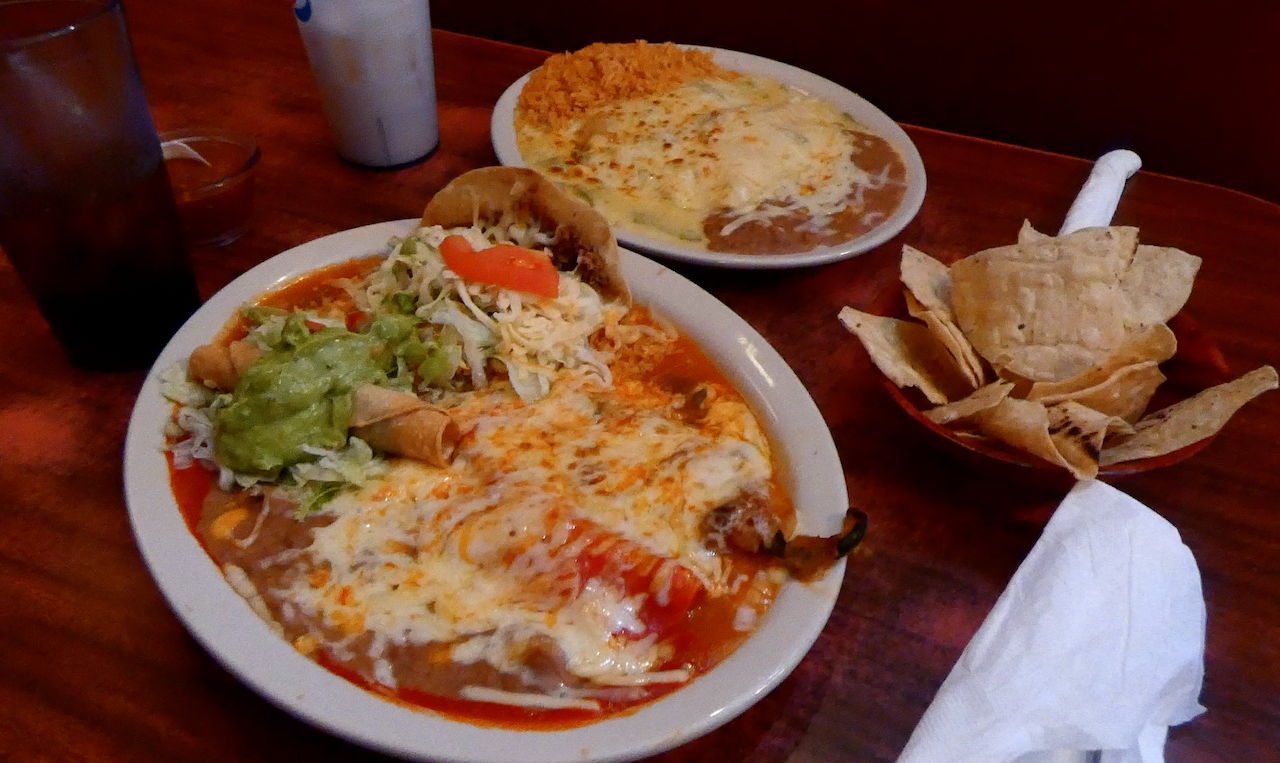 Some of Kiki’s most popular dishes, the Mexican combination plate and green chile enchiladas. Photo by Amanda Pracht, Borderzine.com

While it’s true you can find Mexican restaurants around just about every corner in the borderland, there is a certain something about Kiki’s that keeps patrons coming back for generations.

“Our style of food is a little different,” Latigo said. “For example, our green sauce has a little bit of a different, creamier, spice to it and we do everything fresh.”

The restaurant is most known for their mouth-watering green chicken enchiladas, spicy molé and it’s “famous machaca” plate. The only things that are not on the menu are pork dishes – not even the Mexican staple, carnitas.

“We’ve never banned pork from our menu; we have bacon that we add to our breakfasts and burgers. But I believe that our customers have a particular taste and have never really asked for pork products. It just comes down to what our customers ask for,” Latigo said. “… It’s been working for us for over 40 years, so why am I going to change those things?”

The menu isn’t the only thing that hasn’t changed about Kiki’s. Latigo said the interior design remains in the same style as it did when it first opened.

“I truly believe that a lot of folks, especially those from out of town, want to come to a place that’s original and something from the past. They can get an upscale, fancy, modern Mexican restaurant in New York. But when they come into town, they want a place where the locals hang out. And even the locals tell me, ‘just leave it the way it is, this is the way it’s been even before it was Kiki’s.’ This is because it was a bar and grill right before it became Kiki’s,” he said. 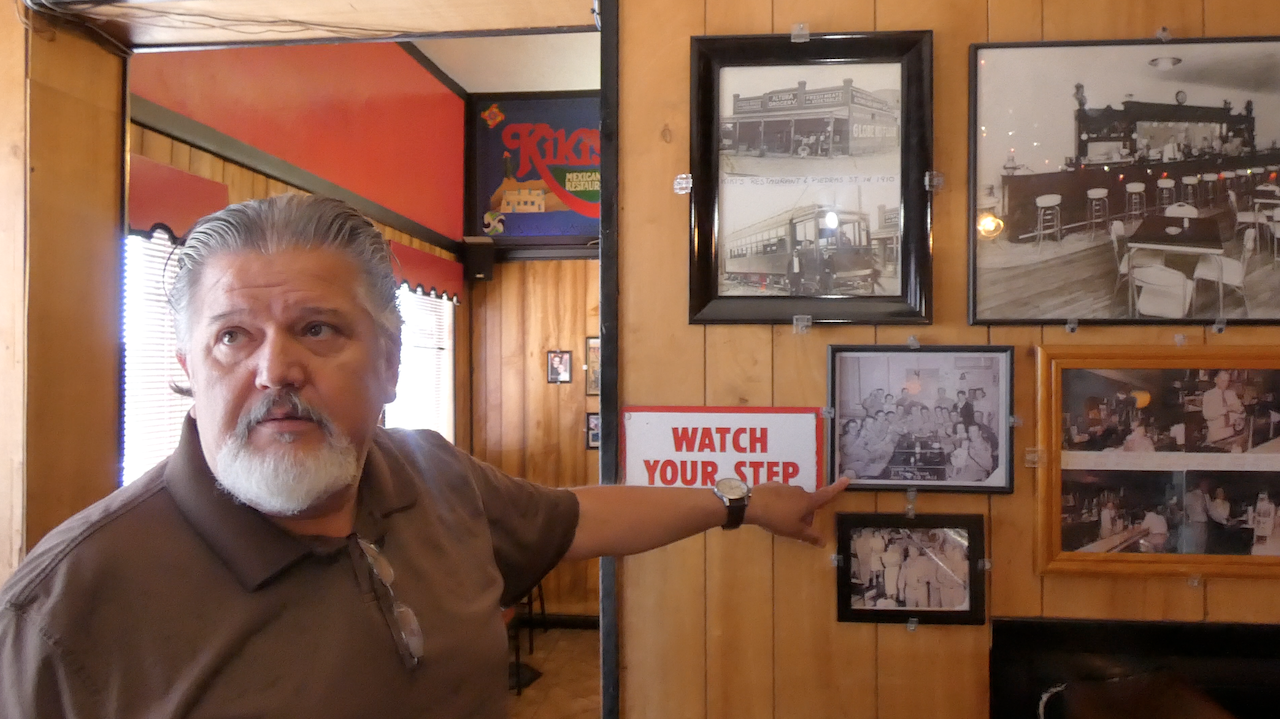 Standing by a collection of old black and white photographs, Latigo said the building has hosted a variety of other businesses. “Back in the 1910’s and 1920’s this building used to be right next to a trolley stop. It was a store by the name of Altura Grocery.”

Latigo has tried to keep artifacts from the building’s past, including a set of four iron stakes on the side of the building which once were used to tie up horses while patrons shopped inside. “Those stakes had been here since before Paula and I were here, and I remember when the city finally came to redo the sidewalk, they pulled the stakes out and gave them to me for safe keep.” 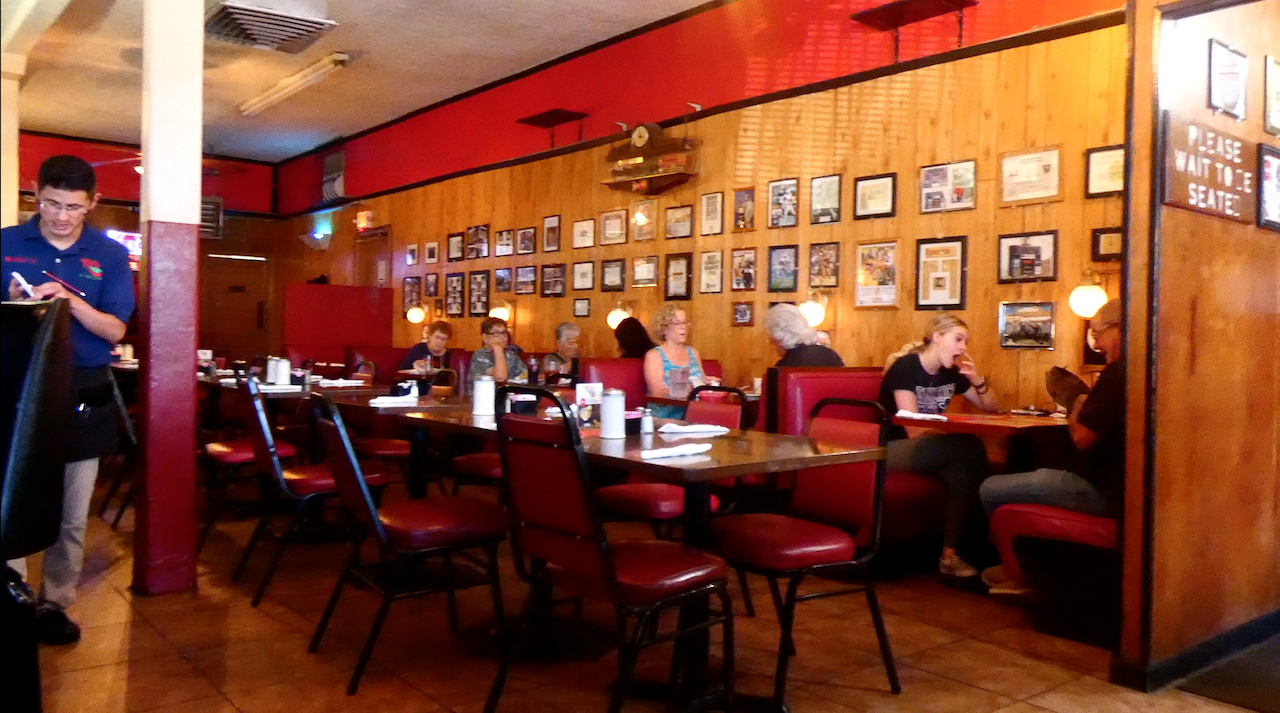 Patrons eating at the booths of Kiki’s as lunch begins, while a waiter writes down an order. Photo credit: Amanda Pracht

The 64 seat restaurant is usually packed for lunch and dinner. Latigo said there are regulars who have been coming in since before he started working there.

” I’ve gotten to know the regulars on a very deep and personal level, and I wouldn’t change that for the world. And we don’t just make regulars feel like family, we make anyone who walks through our doors feel like family. I’ve had folks who’ve never had Mexican food come in, I’ve had celebrities in. … I mean people from all over the world stop by. My customers are everything to me,” he said.

Whenever Carmen Bethany and her daughters get a hankering for green chile enchiladas, Kiki’s is their go-to place.

“Probably I’ve been coming here since it was built or maybe a couple years after that, I would say,” she said. “It has great food and we like the green chile enchiladas and many other things too. It’s a great atmosphere, really friendly, nicest people, just a great place to come to.”

Kiki’s is part of her family story too.

Bethany recalled a day 18 years ago when one of her daughters went into labor with her grandson while eating at the restaurant. Now that grandson comes with them after school. Roberta, Carmen Bethany’s other daughter said “I can’t think of a time when Kiki’s wasn’t in my life. I’ve literally been coming here for as long as I can remember. We love the food and we always get the same meal, we actually split it. We love the atmosphere, we just love the feeling of hominess, that’s what keeps us coming back.”

Amanda Pracht is a multimedia journalism major at UT El Paso with a minor in theater arts. She plans to graduate December 2019.