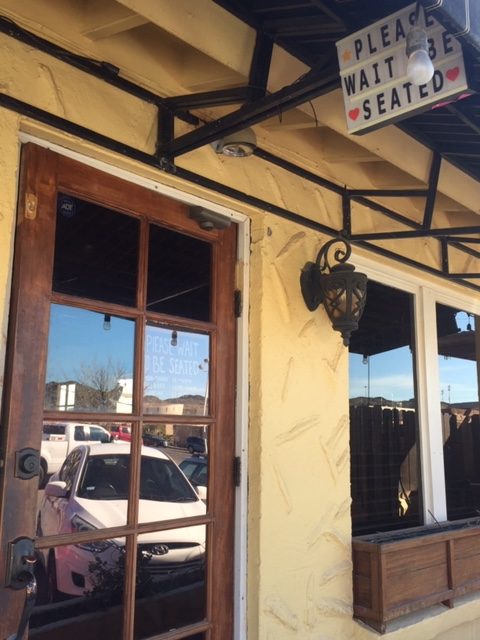 Kaedama ramen restaurant keeps so busy it has a sign at the door that tells customers to wait outside until a server greets them. Photo by Kate Gannon, Borderzine.com

THE HUM OF A FOOD TRUCK HAS BECOME THE SOUNDTRACK TO MANY EL PASO MEALS IN RECENT YEARS, ATTRACTING DINERS WITH THEIR UNIQUE AND AFFORDABLE OPTIONS. NOW, FOOD TRUCK OWNERS LIKE PALOMA TREJO ARE MAKING THEIR NEXT STOP A BIT MORE PERMANENT.

ACT 1: Paloma Trejo (:07)
“We always had the idea of doing a store front, and we used the food truck as sort of like the vehicle to get us here.”

AFTER FOUR YEARS ON WHEELS, TREJO OPENED HER BAKERY IN A 1950’s STUCCO BUILDING ON PIEDRAS STREET IN CENTRAL EL PASO.

TRACK 3:
FOR FIRST-TIME BUSINESS OWNERS LIKE TREJO, FOOD TRUCKS OFFER THE CHANCE TO EXPERIMENT AND LEARN WHAT CUSTOMERS LIKE.

ACT 3: Trejo
“it was through the food truck that we figured out that we like doing seasonal flavors and that people were kind of into that.”

TRACK 4:
THE TOP SELLERS FOR THE TRUCK ARE CUPCAKES THAT TREJO SAYS SHE’LL NEVER TAKE OFF THE MENU.

ACT 4: Trejo
“Right from the get go…our two most popular flavors are the churro and the red velvet. Those are the ones that everybody wants”

TRACK 5:
LEE ANNE VEGA AT THE EL PASO CHAPTER OF THE SMALL BUSINESS ADMINISTRATION, SAYS TREJO IS AMONG MANY IN THE BORDERLAND TURNING TO FOOD TRUCKS TO START UP A NEW BUSINESS.

TRACK 6: (:22)
ACCORDING TO FOOD INSPECTION DATA FROM THE CITY’S HEALTH DEPARTMENT, THERE ARE CURRENTLY MORE THAN 300 ACTIVE MOBILE FOOD VENDOR PERMITS IN EL PASO.

VEGA SAYS MANY NEW ENTREPRENEURS IN EL PASO DON’T HAVE ACCESS TO THE CAPITAL TO START A BRICK AND MORTAR BUSINESS. ACCORDING TO 2017 CENSUS DATA, THE AVERAGE ANNUAL INCOME IN EL PASO IS JUST UNDER TWENTY THOUSAND DOLLARS, COMPARED TO A NATIONAL AVERAGE OF THIRTY ONE THOUSAND DOLLARS.

ACT 6: Vega (:26)
“You don’t want the majority of your- of your finances to go to overhead costs: to renting a space or all of the maintenance and upkeep that comes from that. So if you have a food truck the cost is minimal to get it going, and to move it around, and even just employee-wise you don’t need as many employees to keep a food truck running as you would for a brick and mortar location.”

ACT 7: Gabe Valencia
“It’s a much smaller risk with the bus.”

ACT 8: Valencia
“If the bus had failed it would have been a small investment compared to the one that the restaurant was, so it was a nice little trial run.”

TRACK 8:
LIKE TREJO, VALENCIA FOUND THAT THE LOWER RISK OF THE FOOD TRUCK ALLOWED HIM TO EXPERIMENT WITH FOODS THAT WEREN’T COMMON TO EL PASO.

ACT 9: Valencia (:20)
“When we had just launched the bus we actually were kind of like an all-around Asian cuisine type deal. We had pho on the menu, we had banh mi sandwiches, we had steamed pork buns, …and eventually we just settled on it being a Japanese ramen bus”

(Nat sounds of outside Kaedema)
TRACK 9:
TURNS OUT, SETTLING ON RAMEN WAS A GOOD CHOICE. THE FOOD TRUCK TRANSFORMED INTO A RESTAURANT ON EL PASO’S WEST SIDE AND KEEPS SO BUSY A SIGN ON THE DOOR TELLS CUSTOMERS TO WAIT OUTSIDE UNTIL A SERVER GREETS THEM.

Ambi kitchen
THE TINY KITCHEN STAYS ACTIVE TURNING OUT BOWLS OF HOT RAMEN TO A FULL HOUSE.
(Fade out ambi)

TRACK 10: (:11)
TREJO ATTRIBUTES THE GROWING POPULARITY OF FOOD TRUCKS IN EL PASO TO A STRONG TRADITION OF STREET FOOD IN NEARBY JUAREZ, MEXICO..

ACT 12: Trejo (:10)
“A lot of us, you know, grew up in Juarez or come from Juarez where street food is sort of like a normal thing. You know we’re never scared of eating tacos on a street corner. We have that culture.”

BOTH VALENCIA AND TREJO SAY FOOD TRUCKS WERE ALSO A WAY TO SEE IF THEIR COOKING WAS GOOD ENOUGH FOR A SUCCESSFUL BUSINESS.

ACT 10: Valencia
“A lot of people I think make really good food. People like their family and friends will tell them it’s good. And when they open the restaurant and it’s you know it’s the public. They don’t- they’re not forced to be nice and they might get different reactions”

ACT 11: Trejo
“it does give you that validity. It’s like ‘oh ok yeah. Here’s a total stranger and they love what I do,… and you know now they’re asking me where my location is.’ So you know you start to see sort of a demand for it.”

TRACK 11:
NOW IN HER OWN STORE, TREJO IS HAPPY TO BE WAITING ON A STEADY STREAM OF CUSTOMERS. SOME DAYS SHE HAS TO CLOSE EARLY, TELLING HER FACEBOOK FOLLOWERS SHE RAN OUT OF GOODS FOR THE DAY. THIS GIVES HER HOPE THAT SWEET ADDICTION BAKERY CAN BUILD THE KIND OF LOYAL FOLLOWING ENJOYED BY SEVERAL LONG-TIME, MOM-AND-POP FOOD SPOTS ON PIEDRAS STREET.

TRACK 12:
TREJO’S TRUCK IS PARKED BEHIND THE BAKERY. SHE HOPED TO USE IT FOR CATERING EVENTS, BUT IS TOO BUSY KEEPING UP WITH THE DEMAND AT THE STORE. FOR NOW, SHE’LL LET THE CUSTOMERS COME TO HER.