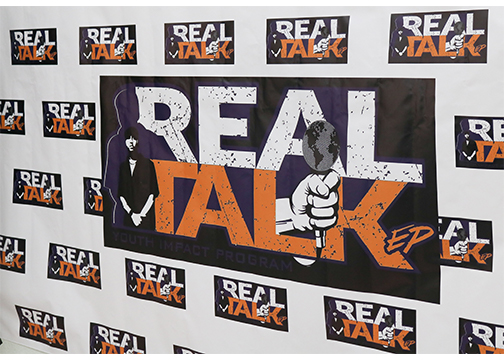 A Real Talk EP banner displayed during a presentation at Cesar Chavez Academy in El Paso, Texas on October 9th, 2019.

A motivation program for children and teens called Real Talk that features conversations with felons and individuals convicted of crimes recently launched in El Paso. The project goal is to steer borderland children and teens away from dangerous lifestyles by getting them to engage in honest and open conversations with former convicts about the dangers of drug abuse, gang life, and crime.

“The ultimate goal is to try and save as many kids as we can,” said Real Talk founder Sheree D. Corniel who launched the first project in Las Vegas in 2013.

Corniel, who has 20 years of experience working in law enforcement as a U.S. probation officer and juvenile parole officer, said she hopes to launch additional branches of Real Talk at cities across the U.S. El Paso is the second Real Talk location.

Even before the program’s official launch next month, Julian Morales, whose hard work and perseverance helped bring the non-profit program to the Sun City, and other Real Talk presenters have visited local middle and high schools to promote the program to students and parents. They also held a special event at Cesar Chavez Academy, a local school for at-risk students.

Presentations with ex felons are a a major feature of Real Talk. Former felons share their life stories, talk about how they became involved in a gang or in crime and urge youth to stay on the right path. The former felons’ crimes vary from murder, robbery, driving while intoxicated and other brushes with the law.

“We want to be a beacon of hope for the felons that are coming out, raising their hand, wanting to do something positive,” said Morales, who spent more than a decade in prison for a drug crime and other felonies.

He added that believes bringing the program to his home city will help save the youth who are on the same destructive path that he went down and provide them positive alternatives such as after school activities to keep them busy and off the streets.

Born and raised in El Paso, Morales said he learned about the Las Vegas program and after numerous calls to Corniel she agreed to allow him to open a branch in his home city if he first obtained permission to open a non profit. Morales received the legal permission last January.

Real Talk EP is open to children ages 8 to 18 and consists of three initial classes at the Southwest University Auditorium, on the first Tuesday of every month at 6 p.m.

Parents attend the first class with their children and participate in discussions with a parenting group, while the youth attend their first Real Talk session.

Although parents are not required to attend every time, the children and teens who join the program must be accompanied by an adult every time.

Real Talk sessions consist of a female and two males offenders. During the sessions, they share their stories with youth in hope that their personal examples will keep them from making the same mistakes. Individuals who have been charged with any kind of sexual assault or child endangerment are excluded from participating. 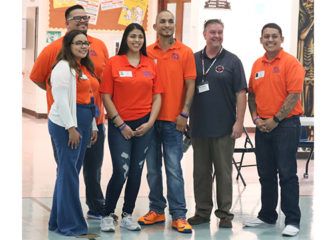 Real Talk EP presenters and volunteers during a presentation at Cesar Chavez Academy in El Paso, Texas on October 9th, 2019.

In addition to participating in the conversations and receiving guidance, students and parents who meet the requirements can apply for a monthly stipend of $150 to use for after school programs or STEM projects, sports equipment, or time in a recording studio.

All young people ages 8 to 18 are eligible to participate in the Real Talk program, not just those considered at risk. The program is also open to students who excel in school but may not have funds to participate in extracurricular activities.