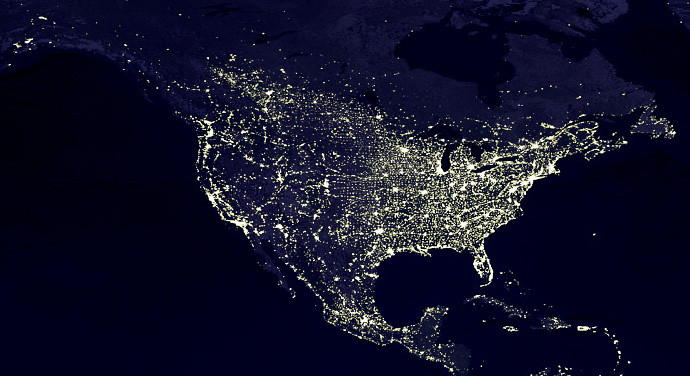 Dark Sky advocates say that El Paso’s 14-year-old light pollution ordinance has made a difference for stargazing in the Sun City.

“I’m happy to say that the light pollution in El Paso is practically gone,” said Marcia Turner, a community activist who helped push for the 2005 city ordinance that required changes in municipal and business lighting practices to help keep the stars visible in the night sky.

Before the Dark Sky ordinance, Turner said stores would often compete for business by using bright lights which not only added a heavy amount of light pollution but made it difficult for people’s eyes to adjust.

“Notice the stars that you can see now, that you couldn’t before,” Turner said.

The worst light pollution in the area is now coming from the Permian Basin oil field around Midland and Odessa, Wren said. An example of a covered street light on the UTEP campus.

“There’s still a lot of light being installed that’s not compliant, so I don’t believe there’s much in the way of enforcement going on, but much of the light that’s going in is good,” Wren said.

Joel Candelaria, an electrical plans examiner for the city of El Paso, said during the field inspection of new construction, electrical inspectors are responsible for verifying that proper light fixtures are installed. The biggest issue is that despite the city ordinance requiring existing lighting on older buildings to be updated by 2015, not everyone has made the change.

When buildings are found that do not adhere to the requirements set up by the Dark Sky ordinance, the situation is handed over to code enforcement. Violators can be charged with a Class C misdemeanor, which carries a fine of up to $2,000. They can subsequently be charged with a separate offense each day they are out of compliance. There are exceptions to lighting restrictions. For instance, airports and recreational areas follow their own set of light regulations. Flood lights that are firm and grounded also are allowed. But residential lighting must be shielded to minimize stray light “trespassing” across property boundaries.

In some areas in El Paso, decorative lights may not be allowed, with the exception of lighting sculptures or flags. Candelaria said that the Dark Sky ordinance restrictions are heavily affected by the area people live in.

“You kind of have to go through it page by page, and scenario per scenario.”

The city does allow an exception for seasonal decorations using low-wattage incandescent lights, but only from November 15 to January 15.

Candelaria said LED lights are now more common as more businesses are starting to switch to them for energy efficiency.

“The LED lights are a lot brighter. So obviously you’re getting more of a halo affect. So I can’t really say that it’s mission accomplished,” Candelaria said.

How residents can reduce light pollution

The International Dark Sky Association offers the following advice on how residents can reduce light pollution:

Avery Oliver is a photographer and video maker set to graduate with a degree in multimedia journalism from UT El Paso in May 2019. She has been a frequent public speaker on issues about social justice.