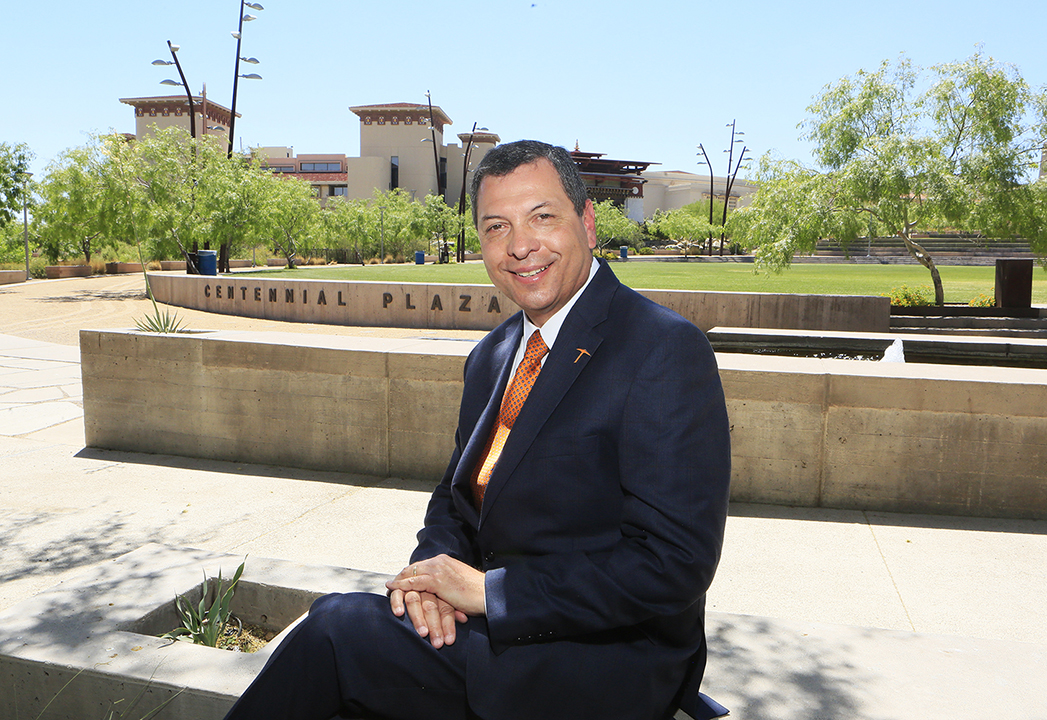 Texas Gov. Greg Abbott has appointed UTEP doctoral student Daniel R. Dominguez to a one-year term as Student Regent on The University of Texas System Board of Regents. He is the first UTEP student appointed to this position.

Dominguez, who expects to earn his Ed.D. in educational leadership and administration in 2023, is The University of Texas at El Paso’s director of accounting and financial reporting. His term as Student Regent began June 1, 2019, and expires May 31, 2020. He said he is excited to serve as the voice of the more than 235,000 students who attend the System’s 14 institutions.

The native of Ciudad Juárez, Mexico, said his job is to provide the Regents with a student’s perspective. According to the UT System website, the Student Regent has the same rights as regularly appointed board members except they cannot vote nor are they counted toward a quorum.

“I bring more than 26 years of professional experience to the board,” said Dominguez, who plans to make college affordability and accessibility his main issues. “I bring honesty, integrity and a commitment to do things right the first time. I see this appointment as a calling.

“I am familiar with students from across the state. I see their potential for success as easily as the difficulty many of them have at paying for college. I promise to work hard with the Regents to ensure all students have access to a quality education.”

UTEP President Diana Natalicio said she was pleased with Abbott’s selection of Dominguez as the next UT System student regent.

“We are so pleased that Gov. Abbott has named a UTEP student to serve as Student Regent on the UT System Board,” President Natalicio said. “Daniel Dominguez’s extensive professional experience combined with his background as an international student give him a well-rounded perspective that will serve the board and the thousands of students he will represent. His appointment provides the opportunity to have an El Paso perspective on the Board of Regents and is sure to be a valuable learning experience for Daniel. We wish him the best as he embarks on this exciting one-year journey.”

Dominguez, who became a naturalized citizen in 2014, earned his bachelor’s degree in accounting from the Instituto Tecnológico de Ciudad Juárez (1987), and a Master of Science in Economics (1997) and a Master of Business Administration (2005) from UTEP.

In his job at UTEP, he is responsible for the overall direction, coordination and evaluation of two business services departments: financial reporting and general accounting. He supervises preparation of monthly and yearly financial statements, and prepares data for reports for University executives, as well as various local, state and federal regulatory agencies. He monitors resource allocation and use of approved construction, capital and other plant fund projects, and is a liaison to external and governmental auditors.

Upon the completion of his doctoral degree, Dominguez said he would pursue an executive positon in higher education.

The 79th Texas Legislature authorized the Student Regent position in 2005. Dominguez is the first UTEP student to hold this position, according to the Office of the Board of Regents.