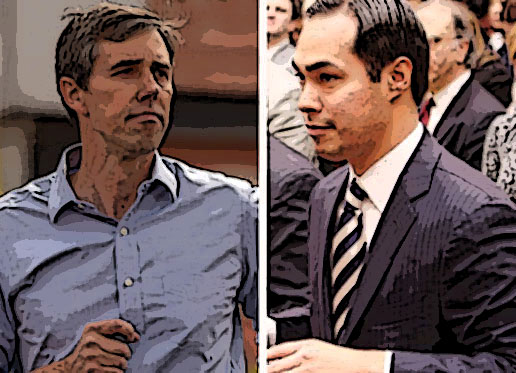 Texans Beto O'Rourke and Julian Castro squaring off against each to be the Democratic nominee for the 2020 presidential election.

MIAMI — Home-state tensions flared between Democratic presidential candidates and native Texans Beto O’Rourke and Julián Castro at their party’s first presidential debate Wednesday night, with Castro saying O’Rourke has not done his “homework” on the issue of immigration.

At issue were the inhumane conditions at detention centers for migrants — including Texas — and a photo published Tuesday of the bodies of Salvadoran father Óscar Alberto Martínez Ramírez and his daughter Valeria, both of whom died while trying to cross the Rio Grande to seek asylum in America.

“Watching those images of Óscar and Valeria is heartbreaking, and should also piss us all off … and it should spur us to action,” Castro said, fielding the first question on immigration.

Castro, who’s trailing a number of his rivals in polling and fundraising, seized the issue. He interjected with Booker and repeatedly urged the other candidates on the stage to repeal Section 1325 of the Immigration and Nationality Act. That portion of the law, as currently implemented, makes it a crime to cross the border at places other than ports of entry. Castro wants to return to treating the act as a civil offense.

But it was when O’Rourke — who had previously been nudged by the debate’s moderators for not directly answering questions — weighed in that Castro began talking over his fellow Texan.

“We would not turn back Valeria and her father, Óscar,” O’Rourke said, when answering a question on what he would do on his first day as president. “We would accept them into this country. … We would not build walls; we will not put kids in cages.”

Castro then pelted O’Rourke, asking him why he would not support decriminalizing improper border crossings. O’Rourke has expressed unease with the idea, questioning what it would mean for prosecuting criminals like drug smugglers and human traffickers. But Castro has countered that there are already other ways for those people to be brought to justice under current law.

O’Rourke countered that as a member of Congress, he introduced legislation “that would ensure that we don’t criminalize those who are seeking asylum and refuge in this country.”

“I’m talking about everybody else,” Castro interrupted, in what quickly escalated into the most heated exchange of the evening. O’Rourke responded that he was attempting a larger rewrite of the country’s immigration laws.

“That’s actually not true. … If you did your homework on this issue, you would know we should repeal this section,” Castro responded.

Jaime Castillo, a spokesman for Castro, acknowledged after the debate that the early campaign has been a struggle.

“It’s no secret that he hasn’t had the media attention other candidates have had. I don’t want to kid a kidder,” he said. “He knew that, and he knew that to make a splash tonight would be his best path to getting more media attention beyond the Texas press and in the national press and also in the fundraising.”

Castillo said the candidate has spent recent weeks preparing for the debate in hotel ballrooms and over conference calls from his campaign headquarters.

I knew it was going to be an issue he was going to be passionate about,” he said. “He’s at a point where he can’t stomach what this administration is doing anymore,” he said. “The caging of kids and human beings on our American soil is too much to stomach for him.”

As for whether Castro knew going into the debate that his moment would involve a fellow Texan, Castillo said it was “not so much for it to be the pivot point.”

But, he added, Castro was well aware of O’Rourke’s position on Section 1325 because of press coverage.

“It was on the mind in terms of he knew there was a clear policy difference,” Castillo said.

The scuffle with Castro was not the only time in the debate that O’Rourke took heat. Early on, New York Mayor Bill de Blasio interjected after O’Rourke made the case for Medicare for America, a proposal that would give government-run health insurance to the uninsured but allow those with private insurance to keep it if they like it.

“Congressman O’Rourke, private insurance is not working for tens of millions of Americans,” de Blasio said. “How do you defend a system that is not working?”

“That’s right, so for those who are not working, they can choose Medicare,” O’Rourke said as de Blasio continued to press his point.

The Texas Tribune is a nonprofit, nonpartisan media organization that informs Texans — and engages with them — about public policy, politics, government and statewide issues.