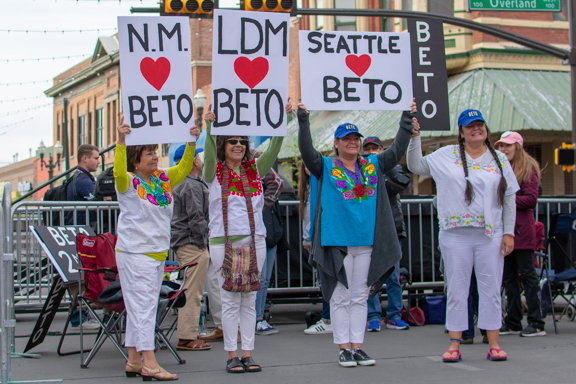 Thousands of people – including at least one person who drove from Seattle – came to Downtown El Paso on Saturday morning to see presidential hopeful Beto O’Rourke kickoff his presidential campaign.

“I still need to study him more and his policies before I can say he has my vote, but from I’ve seen here, I like him,” Pratt said as O’Rourke gave his 30-minute speech.

“I’m studying immigration and human rights, I came and drove all along the border region just to see how the situation was being handled,” she said.

“It is clear to me that immigration reform is one of the most pressing issues, and how it’s being handled, also I’m an idealist 22-year-old, so in a perfect world I would love health care for all and for tuition to be lowered,” she said.

O’Rourke spoke to a crowd of some 4,000 people as part of his campaign for presidency in 2020, some of them of voting age, and some considerably younger.

“I wanted to see Beto because when he was running for Senate, I googled him and like the way he was thinking,” said Evan Moreno, 14, from Lordsburg N.M. O’Rourke ran unsuccessfully against GOP incumbent Ted Cruz in November.

“My aunt called me and told me he was going to be here so I begged her to bring me, I came in at three in the morning,” Evan said.

The gathering included U.S. Rep. Veronica Escobar, who succeeded O’Rourke as representative. O’Rourke was introduced by his wife, Amy. O’Rourke was scheduled to host a rally in Houston and then one in Austin later in the day.

Many people from other states were inspired by O’Rourke’s progressive ideas and traveled to El Paso to voice their opinion about the new presidential candidate, one of 18 people who have declared their candidacy.

“I think he’s a great guy, he seems like a very relatable person. He has a lot of great support from LGBTQ and minorities, and that’s what it’s all about,” said Valerie Caballero, 43, from Seattle, Wash.

Some visitors to El Paso at the rally were indecisive about O’Rourke.

“I’m not all for tearing the fence completely down, I think some areas do need it. The thing about it is he (O’Rourke) hasn’t made any strong grand plans yet, kind of like the person in office today,” said Keith Heade, 62, from Dallas.

The spotlight on El Paso lately has brought attention to O’Rourke and his campaign by bringing in citizens from all over the country his rallies.

“I am a former Republican so I have a lot of conservative views and Beto is the first candidate that I’ve seen that is willing to across party lines,” said Carole Callaghan 45, from Denver.