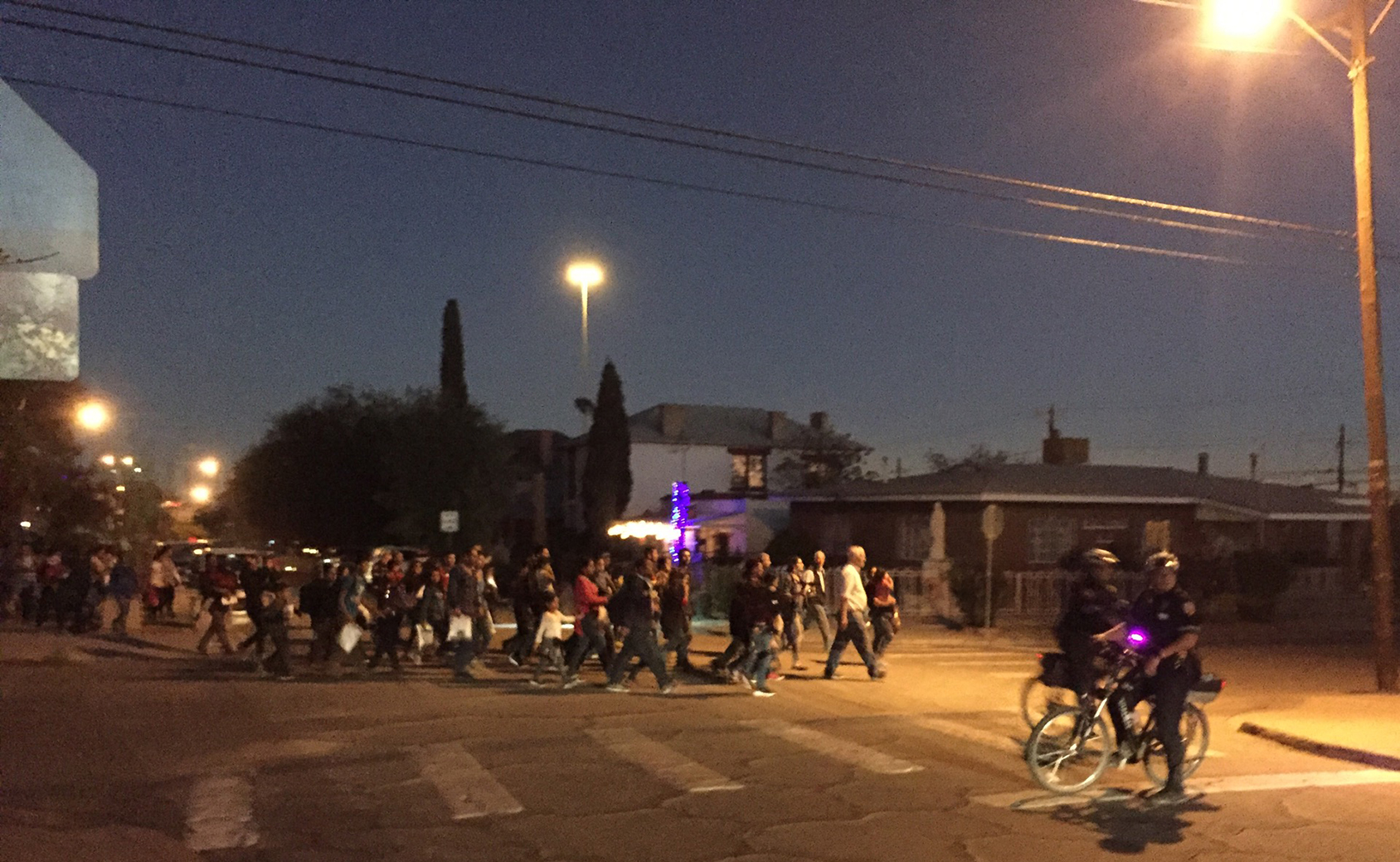 EL PASO – Chaos loomed when Immigration and Customs Enforcement agents dropped about 100 Central American migrants at the Greyhound station of this border city without notice Friday night. The families were in a strange city, many with little money and limited ability to contact loved ones for help.

Then they were helped by angels.

Ruben Garcia, the founder and director of the Annunciation House program that has housed and fed migrants for more than 40 years, knew since Wednesday that ICE planned to begin a new policy of essentially dumping migrants on border city streets. The migrants had been detained for several days in what are supposed to be short-term holding cells along the border in El Paso, and border authorities are struggling to cope with a fresh surge of Central American families coming to the United States to flee poverty, violence and corruption in their home countries.

Garcia got word shortly before 7 p.m. that several ICE buses had dropped dozens of people at the Greyhound station, and headed that way. As he arrived, another bus came and disgorged more migrants.

Faced with a crowd swarming its parking lot, Greyhound officials called police for help, and six to eight bicycle officers soon arrived, Garcia said. “This was really a bright moment for the police, who were taken in by the humanity of the moment,” he said in an interview Sunday.

Garcia was able to arrange to use a former Catholic school adjacent to Holy Family Catholic Church in Sunset Heights, about a mile from the bus station, to house the families. He sent texts to several people in El Paso alerting them to the situation and asking for help to care for the families that night. Many who received the texts quickly shared the plea for help on social media. (Full disclosure: the author was one of the text recipients, and posted Garcia’s text message on Facebook.)

Garcia decided that the group should walk to Holy Family, a plan that concerned the police officers. They offered to try to get buses to move the group of migrants. “I told them that by the time they got the permissions they needed it would be tomorrow morning. So I said let’s walk,” he said. The officers called Emergency Medical Services, who found that several of the migrants needed immediate medical care. The officers then rode along with the group, offering protection on the walk.

“As we were walking, I was fighting just to not break down crying,” Garcia said. “This is my country, where all people are created equal. Those are powerful words. The strength of our country does not come through fighter jets or M-16s, it comes from those words. And we’re not living up to those words right now.”

By the time the migrants reached Holy Family, the former school was filling with volunteers seeking to help after being alerted by texts, phone calls and social media posts. Garcia and the migrants were overwhelmed by the response. “Many of them began breaking down out of gratitude,” he said.

Throughout the night, dozens of El Pasoans came by Holy Family to drop off food, blankets, towels, clothing, toiletry items, toys – life’s basics for parents and children who carried little but the clothes they were wearing.

The families slept on the floor. Garcia – who attended elementary school in the building decades ago – said he approached one father and asked how he was doing. “He said, ‘you can’t believe what it means to me that you guys have done all of this for us. God is truly here,’” Garcia recalled.

Since 2014, migrants from Guatemala, Honduras and El Salvador have made up the bulk of people apprehended for illegal entry into the United States. Border agencies have struggled with how to deal with them because the migratory flow is made up predominantly of families or children traveling without a parent or guardian.

Much of the U.S. immigration enforcement system – including the border holding cells – is still based largely on stopping and quickly deporting single Mexican men trying to enter the United States to find work.  The numbers of such border crossers have plunged dramatically in recent years and the total number of border apprehensions is at a 40-year low. But the numbers of families arriving together at the border has swelled in recent months. A Guatemalan woman named Miriam broke into tears as she described her separation from her 5-year-old son, who was taken from her by Border Patrol agents on June 16. She was one of several parents to speak at an El Paso press conference this summer when the government’s “zero tolerance” policy separated undocumented immigrant parents and children at the border. Annunciation House director Ruben Garcia is at right. Photo by Robert Moore.

More than 16,000 members of what the Border Patrol calls family units were apprehended in September, the highest monthly total in history. The Trump administration is calling this surge in family arrivals a crisis. As the Nov. 6 midterm election approaches, Trump and other Republican leaders have increasingly focused on immigration, particularly a caravan of several thousand Central American migrants that is currently in southern Mexico with plans to come to the U.S. border.

Garcia and other critics of Trump administration policies have said the president is provoking a fake crisis to rally the Republican base ahead of the election.

Since the first wave of Central American families overwhelmed the immigration-enforcement system, ICE has used an orderly process to release people while they await a ruling on their asylum and deportation cases. In El Paso, they have worked closely with Annunciation House, coordinating the release of migrants who are housed for a night or two at one of a number of church-based shelters in El Paso and southern New Mexico. Annunciation House helps them connect with families in the interior of the United States, and helps arrange transportation to reunite with those family members.

But on Tuesday, ICE notified local leaders along the border that it would begin simply releasing migrants into the streets, without coordination with nonprofits like Annunciation House. Garcia was notified the next day, after community leaders began contacting him for an explanation of what the change meant.

ICE officials have declined to comment about the change beyond a prepared statement issued by Deputy Press Secretary Sarah Rodriguez: “After decades of inaction by Congress, the government remains severely constrained in its ability to detain and promptly remove families with no legal basis to remain in the U.S. As a result, family units continue to cross the border at high volumes and are likely to continue to do so, as they face no consequence for their actions. To mitigate the risk of holding family units past the time frame allotted to the government, ICE began curtailing all reviews of post-release plans from families apprehended along the southwest border starting on Tuesday, October 23. Family units that are released will be enrolled in a form of ICE’s Alternatives to Detention or released on another form of supervision.  Aliens will be issued a Notice to Appear in immigration court, as appropriate. ICE continues to work with local and state officials and NGO partners in the area so they are prepared to provide assistance with transportation or other services.”

Ann Branan Horak reached out to her book club, friends and members of the YWCA board of directors to help assemble more than 200 hygiene and food kits for Central American refugees dropped off in El Paso over the weekend. Photo courtesy Charles Horak.

Garcia said after ICE was criticized on social media Friday and Saturday for releasing the families at the Greyhound station, the agency has agreed to let him know when it plans to release more migrants and deliver them to a location he specifies. The agency released another 61 on Saturday and 121 on Sunday, and they were taken to the Holy Family location.

“One of the things that concerns me is that one of these days they’ll call and say we have 500,” Garcia said.

ICE also has continued with the organized releases to Annunciation House. Garcia said he doesn’t know how ICE determines which migrants are released through the traditional formal process, and which are released under the new policy.

Garcia said Annunciation House has received enough donations of food, clothing and other necessities to care for the people now being released. The agency’s biggest need right now is money to pay the $38,000 weekly hotel bill.

He said he was overwhelmed by El Paso’s immediate reaction to the crisis. “It was truly amazing.”

How you can help

Annunciation House is in need of volunteers to help feed and care for a large number of Central American migrants, including driving them to the bus station or airport. If you would like to volunteer, email refugees@annunciationhouse.org.

The nonprofit also needs cash donations to pay for rising costs of housing and feeding migrants. Donate online through the Annunciation House website.