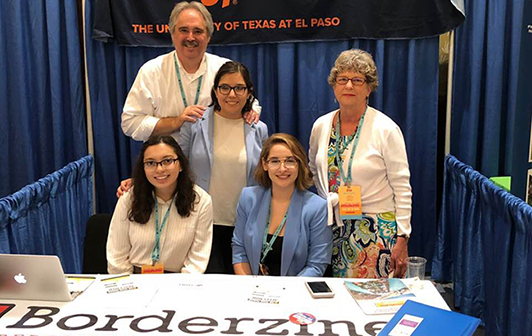 Washington, D.C. – The Borderzine Reporting Across Fronteras project at UT El Paso is among more than 150 nonprofit newsrooms across the country that will participate in this year’s NewsMatch, the largest grassroots fundraising campaign to support nonprofit news organizations. The national call-to-action will launch on Nov. 1, 2018. In 2017 NewsMatch helped to raise more than $4.8 million from individual donors and a coalition of private funders. This year the number of nonprofit news organizations participating has jumped by more than 40 percent.

“There is an incredible amount of excitement building around NewsMatch 2018 from news organizations across the country,” said Sue Cross, Executive Director and CEO of the Institute for Nonprofit News, which serves as one of NewsMatch’s nonprofit partners. “We are encouraged to see such strong growth in community support of news because NewsMatch makes it easy for communities and individuals to find and fund their local sources of trusted news.”

In 2018, more than 150 organizations will be eligible to receive matching funds for individual donations up to $1,000. Donors will be able to contribute between Nov. 1, 2018, and December 31, 2018, at NewsMatch.org—the first and only one-stop platform for donating to nonprofit news. Donations can also be made directly to participating newsrooms.

NewsMatch’s national call to action rallies those who believe in freedom of the press and helps empower journalists to do their jobs by telling stories that spark change and hold leaders accountable. The campaign is driven by a partnership with the Institute for Nonprofit News and the News Revenue Hub, Democracy Fund, the John S. and James L. Knight Foundation, the John D. and Catherine T. MacArthur Foundation, and the Ethics and Excellence Foundation. The Miami Foundation serves as fiscal sponsor for the fund. The Facebook Journalism Project also made a $1 million donation to NewsMatch in 2018. Donors and foundations can join NewsMatch 2018 or support individual newsrooms by contacting The Miami Foundation’s Lindsey Linzer (LLinzer@miamifoundation.org).

Donors can easily find and support trusted reporting in their community and on issues they care about at newsmatch.org. Organizations selected for NewsMatch 2018 include:

These nonprofit news organizations are all members in good standing of the Institute for Nonprofit News. To be a member, an organization must be a 501(c)(3) or have a 501(c)3 fiscal sponsor, must be transparent about funding sources, and produce investigative and/or public-service reporting. Donations are tax-deductible as allowed by law. Visit newsmatch.org for more information.