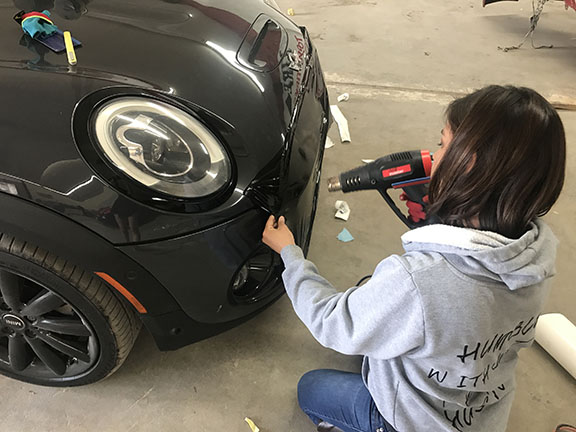 Lina Rodriguez opened her first auto body shop with her husband with only $4,000 in the bank.

“We started in the back of a garage,” said Rodriguez, who was working in the auto insurance field when she got the bug to customize cars after buying a used Mazda RX8.

Her sudden passion for cars was surprising since she never cared much for them, even when her father owned his own shop. But, once she made her first customization on her Mazda she was hooked, and now her father works with her.

Once she launched her auto repair and customization business, the demand for work quickly outgrew the two-car residential garage and she opened her first Buddy’s Body Shop. Now she has four shops in El Paso, including one at 8254 Alameda Ave, the main drag for many of the city’s small car lots and auto body shops.

Rodriguez specializes in paint jobs and wraps for showpiece cars. She herself is a competitor in car shows, showing off her hot pink Mazda RX8 from Stance Wars in Las Vegas to Long Beach.

“If you are in it for the right reason it is really rewarding,” Rodriguez said.

Rodriguez does acknowledge that not many women are in the industry.

Joe Vasquez that has been working for Rodriguez for six years, has learned special techniques she taught him and has made him do better work for clients.

“She basically made me,” Vasquez said. “She has accomplished a lot. You hardly see any woman run an entire shop with an eight-man crew and is able to do it with success.”

Rodriguez works mostly with “stance cars,” vehicles that are customized for shows. She also believes that “you can portray your personality in a car” when you decide to change paint or replace car parts.

Stance cars have a different look than those at low rider shows that many people are familiar with.

“They are air brushed candy colors and wild. We don’t do wild like low riders do,” she said.