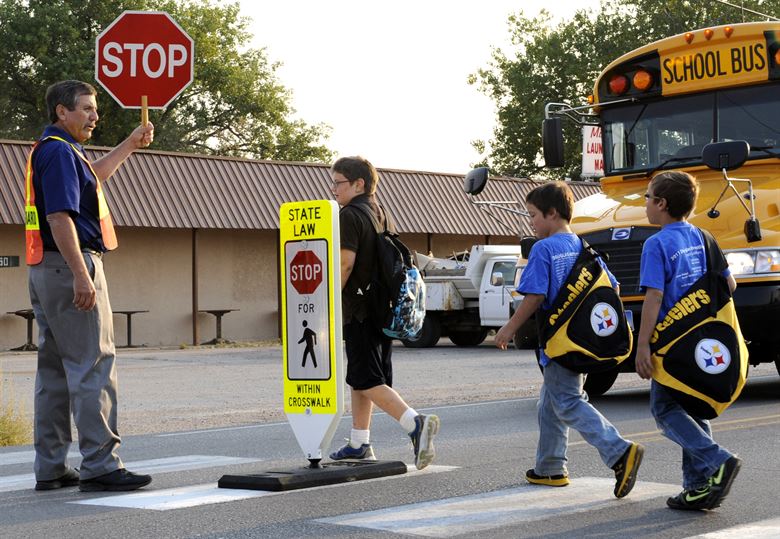 Crossing guards watch over students at schools near Ellsworth Air Force Base as part of a school safety initiative after an increase in vehicle and pedestrian traffic. (U.S. Air Force photo by Airman Ashley J. Woolridge/Released)

Students, teachers and family members are concerned for their safety after several school campus shootings during the past few years, including a campus shooting in Texas that killed 10 and another in Florida that killed nearly 20 people.

Ten people were killed in a high school shooting in Santa Fe, Texas, on May 18. In February, in Parkland, Florida, 17 people – students and teachers – were killed at Marjory Stoneman Douglas High School. Another 17 people suffered injuries when they were shot with a variety of weapons in the Feb. 14 shooting.

Former Douglas High School student Nikolas Cruz has been charged in the shooting with 17 counts of homicide.

With the multiple school shootings that have occurred since the Columbine High School shooting in 1999, El Paso students, parents, and family members of students have an uneasy feeling heading to class.

This year “has been crazy, a lot of shootings. I just don’t know what to do,” said El Paso Parkland High School senior Kobe Bouie, 18.

Bouie said high school staff has not addressed what happened the day before at Stonemason Douglas.

The school does not have a policy for addressing issues from other schools with the student, according to a review of the school district’s policy and procedures.

Jacob Velasquez, 11, student at St. Joseph’s in El Paso did not discuss what happened in Parkland, Florida with his teachers or his parents.

“No one really talks to us about stuff that happens outside of our school,” Velasquez said.

UTEP sophomore William Chapa, 20, said Maddy, his 16-year-old sister who attends Franklin High School: “The reason why I feel safe for her to high school there is because I went there and I was there for four years and I felt safe there. I think it’s a good school, good community.”

Velasquez explains the difference between how secure and safe she feels with Joshua going to a public school and Jacob attending a private school.

“I feel safer with Jacob at St. Joseph’s than with Joshua at El Paso High. Certainly. At St. Joseph’s, from what I know, there is only one entrance in and out of the school. That really puts my mind at ease. It’s also a very small very close community. Everyone knows everyone and if something is going on the parents know about it immediately.”

As part of the Ysleta Independent School District, Parkland High School follows the district safety calendar. The calendar states that there will be a “lockdown drill” twice a year, once in October and once in January.

“Most of the time when there is a lockdown drill, we turn off the lights and put something over the [window on the] door. We all sit on the walls. We have to say silent,” said senior Tyree Barksdale, 17.

“I wouldn’t call it much but it’s still something,” Bouie said.

Melissa Fraher, 20, El Dorado High School class of 2016, went to school in El Paso for one year and says she does not remember having one lockdown drill at all.

“I’m sure they probably told us what to do in case this ever happened but I really do not remember practicing it at all while I was there,” Fraher said.

The FBI was urging school leaders to learn what to do in an active shooter situation, according the an El Paso Times story in December 2017.

“Run. Hide. Fight,” is the mantra demonstrated and suggested by the FBI agents.

There have been multiple “lockdown” situations in El Paso schools over the past three years.

“Yeah there was usually a lot of talking when we had the ‘code blues’ but I guess people don’t realize that this stuff can happen. It could be today, it could be tomorrow, it could be two years from now. You just never know,” Chapa said.

“After so many school shootings happening, you never know these days,” Fraher said

Tierra Fletcher is a multimedia journalism major at UT El Paso. She is expected to graduate in May 2018.