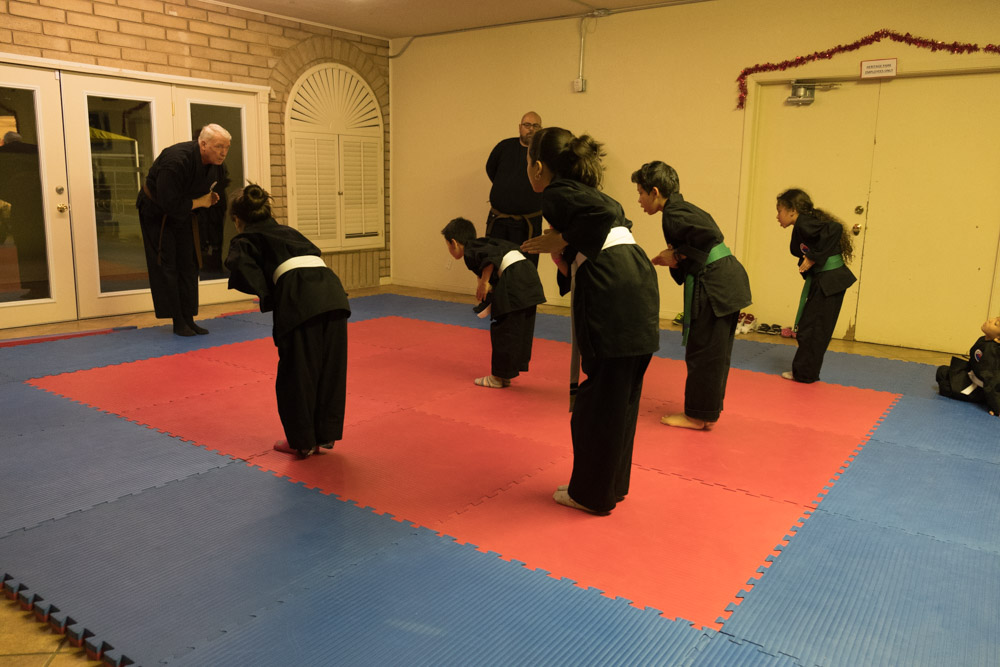 The class bows to the instructor before they begin their katas

It started with a promise to share the martial art Kai Ki Do with others. “A promise I made to the late Supreme Master Albert Robinson. He was the founder of Kai Ki Do. Myself along with a few other individuals in our organization thought it would be good for the children,” said David Cory, an assistant Kai Ki Do instructor.

Cory teaches for the local Kai Ki Do organization and has taught students, ages four to 14, for more than two years a mixture of martial arts, but their core is Shotokan Karate, a form of Karate. The class focuses on teaching self-defense, respect, and not only discipline of the mind, but discipline of the body.

“I’m hoping they get more sense of discipline, better character development, pretty much grow as a person and be respectful toward others,” said Michael Martinez, the parent of two students in the class. His nine-year-old daughter has been attending the class for more than two years and his seven-year-old son has been participating for almost a year. Students have learned martial art stances, blocks, strikes, kicks and defense. Karate forms know as Kata’s are forms taught to help simulate a fight with multiple opponents, according to the organization. They have also participated in sparring or practice fighting to give them real world practice of what they learn in the class.

Candice Kendrice has brought four children to class ranging from ages six to 11, and says their favorite part is learning and practicing the Katas and the reward they receive when they do them correctly. The children progress through the Kai Ki Do belts by executing the Katas they learn over time. The students start as white belts, and can reach a brown belt. The organization does not allow students under 18 to become a black belt.

Shawn Nixon, 19, who brings his two younger siblings to the class, also said their favorite part of the class are the Katas, which they practice all the time at home.

Jayla Holguin, an 11-year-old student, said she really enjoyed the class and practicing Katas. She has learned blocking, multiple stances, and how to count in Japanese.

Kendrice, Nixon, and Martinez all said they’ve seen a difference in how the children behave and that they are learning discipline and respect from the class. The class bows to the instructor before they begin their katas

When working with children, the organization takes various safety precautions. “First off we highly encourage the parents (to attend the class), so if there are any accidents or something the parents object to we can address those issues. We do not allow horse play–that is the main thing,” Corey said. “There’s set protocols on how they act on the mat and off the mat.”

Corey said all children are welcome to join but need to have their parents fill out a permission slip to attend the classes.

Corey has over 22 years of martial arts experience and has multiple belts in different martial arts. He has been practicing Kai Ki Do for six years. There are two other instructors, a brown belt assistant and a black belt, who over see the class and control what the students practice.

Classes range in size from eight to 15 students. Classes are free and are held Tuesday and Thursday from 6:30 to 7:30 p.m. at the Heritage Park activities room, at 10333 Grouse Rd.

The organization holds adult classes after the children’s class and on Saturday and Sunday they teach adults more advanced moves, locks, holds, and breaks, Corey said. They hope to someday soon offer a women’s self-defense class which they have already demonstrated.