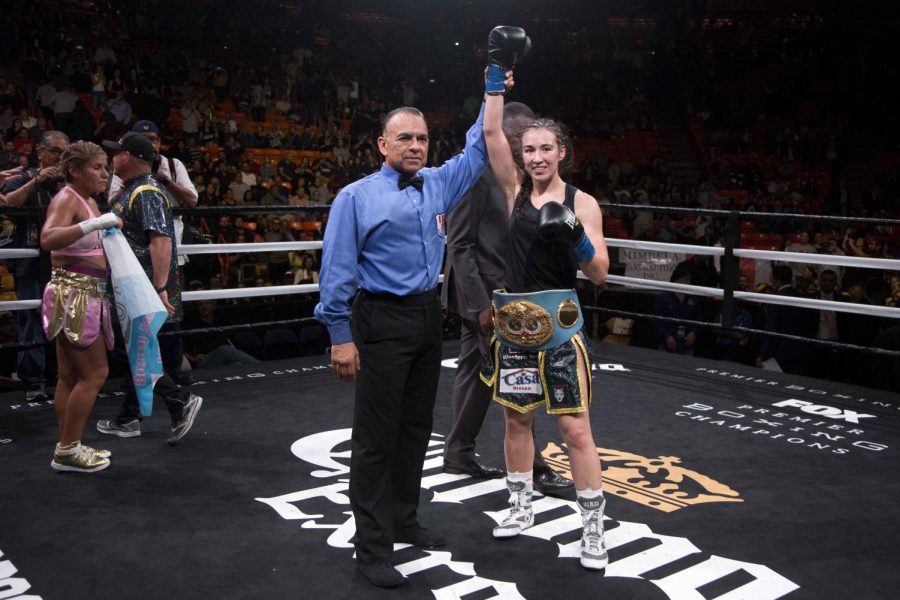 El Paso is a boxing mad city. It always has been. The Sun City has hosted great boxers like Erik Morales, Fernando Vargas and Oscar De La Hoya over the years. But, El Paso has only ever had one world champion to call its own. Comparatively, when the aforementioned De La Hoya reached his sixth successful defense of the WBO World Lightweight Title against Jesse James Leija, the fight was in Madison Square Garden. There were 16,000 fans in attendance. The purse for the fight was rumored to be in the $500,000 range.

Han’s promoter does not report the purses of her fights, but her marketing manager Roman Robles acknowledged via text that female fighters “typically make 10k-50k.” He also added that it was, “significantly less than men.”

Carl Frampton is the second ranked male featherweight in the world, the mirror opposite of Han – statistically speaking. Three fights after he appeared in a fight at the Don Haskins Center himself, Frampton was back in his home country of Ireland fighting in his 34th career fight.

In this fight alone – a loss to Leo Santa Cruz – Frampton made $1 million, according to ESPN.

Despite this disparity, Han stays focused on her fighting and says that the rest will have to take care of itself.

“We’re taking baby steps forward,” said Han with the usual smile that has earned her the nickname of “El Paso’s Sweetheart.”

“I know that I have to prove myself to the ‘big dogs,’ and I will.”

Han went on to say that the biggest issue in women’s boxing – and what keeps promoter’s from booking their fights for big televised fight cards – is that oftentimes they just do not know who they are.

A large part of bridging the financial gap between the men and women – for Han at least – falls to Robles. He can do this by securing sponsorships for Han which earns her far more money than the fighting purse.

“We’re basing the sponsorship on her pedigree as an athlete, not her gender,” said Robles when asked how much a sponsorship deal with Han brings in. He added that he also represents former WBA super welterweight champion Austin Trout. “Right now he’s in the building phase. We ask for more money for Jennifer to be honest with you.”

Although the International Boxing Federation (IBF), the governing organization that matches Han with potential opponents, does not have anything at all to say about how purses are put together or distributed between fighters, federation spokeswoman Jeanette Salazar said that she would like to see equality there – on certain terms. By that definition, the sponsorships provided for Han’s recent El Paso fight by Casa Nissan and Western Tech went almost entirely to support Han, rather than the two main event fighters from out of town, Devon Alexander and Victor Ortiz.

Fans stayed after the Alexander and Ortiz fight and late into the evening to watch Han fight – proof that they were mainly there to watch the hometown fighter.

As far as television goes, the TV contract was in place when Alexander and Ortiz were brought to El Paso by the promoter and it did not include rights to show Han fight on Fox Television nationwide.

So, two out of three is not bad. But, when it comes to pay, Han still missed out on the big payday because her fight was not televised.

Han was back at her father’s gym teaching martial arts the day after her fight. It is a family business and family is very important to her. But, when it comes time to get ready to defend her title–make no mistake –she would love to be like other fighters who make enough money to be able to live and only train for that next pay day.

“If I could just box and make money, that’d be awesome,” said Han with a chuckle. “But, because my fights are not on TV, I don’t get the huge paychecks.”

Han thought for a second.