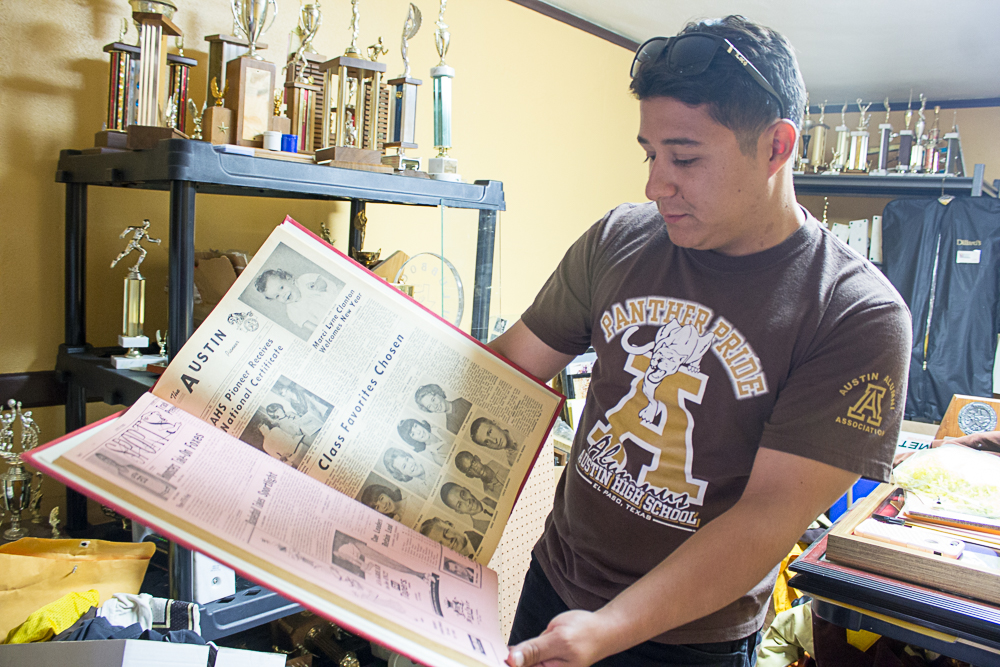 When Chris Steven entered the halls of the Austin High School as a student in 2008, little did he know that in his heart he would never leave.

“I grew up around Austin. It’s my second home. A lot of my early memories were of going to the football games. I just remember how happy I was to come to Austin and I get excited to see all these people very prideful chanting and cheering for the football teams and singing the (Austin) fight song. I love this school. It’s a big part of me,” he said.

Steven graduated high school in 2012 and he is an active member of the school’s Football Boosters Club and Alumni Association. At age 24, Steven is the youngest of both organizations. Steven currently attends Vista College because where he studies construction technology.

“I am just an advocate for Austin High School. All my family has graduated from here except for my grandfather,” he said.

Steven is also a member of the ‘A’ club, a history group at Austin working to preserve the school’s history by creating a detailed exhibit to showcase its 87-year history.

“One of my big things is … Austin’s history and the condition of the school,” Steven said. “My next step is to try to make sure that we restore Austin a 100 percent.”

Gustavo Reveles, spokesman for the El Paso School Independent District, said that all high schools in the district have dedicated spaces to preserve the school’s history.

However, only some schools, such as El Paso High and Bowie, have very detailed displays usually maintained by the alumni associations, Reveles said.

Austin is working toward the same goal of creating a detailed display to show students and the El Paso community the history of the second oldest high school in the city.

Above the school’s cafeteria, a small room was originally given to the ‘A’ club to make of it a museum-type exhibit. The room currently stores more than 50 trophies dating as back as far as 1940 along with vintage photographs, yearbooks, newspapers, and items such as sweaters, jerseys and letterman jackets donated by alumni.

History teacher Hazel Tipton has saved Austin’s memorabilia in her 18 years working at the school. In the past five years, Tipton has arranged the current display cases in the school’s hallways.

“My idea was to set up little areas for the different decades and have trophies and items from that area so that students can see the items and imagine what it was like to live in that era,” Tipton said. Trophies, shirts, and other memorabilia are currently scattered around campus in different display cases, classrooms and even underneath the school’s tunnels which has resulted in loss or damage to some items, Steven said. The ‘A’ goal was to get all the historic collection into one room.

“The room where everything is going to be does have water damage, electrical stuff that needs to be taken care of before we move everything in there,” he said.

Due to voter approval last year of a $668-million bond to improve facilities in the El Paso Independent School District, the space where the room is currently located will be turned into a hallway as part of the school’s renovation project.

A replacement room has not yet been given, but the club was told by administrators that they would get another room when construction is finished. In the meantime, the ‘A’ club will continue to work on preserving Austin’s history by updating the existing display cases around the school’s hallways.

“There’s a lot of work to do,” Tipton said. “If it’s only one or two people doing it, it is not going to happen.”

On average, Stevens said he spends around two to three hours every day working on Austin-related activities such as research, meetings, events, and assignments for the different organizations he is part of.

“When you’re passionate about something, it’s kinda hard to keep track of how much time and effort you put into it,” he said.

Steven said he had a great time as a student at Austin that he works hard to try to give that same feeling to current students.

“Volunteering at Austin High School is like my full-time job. I work with parents and other teachers to try to prove Austin is fun and try to teach some of the students about the history,” Steven said.

According to the EPISD bond budget, Austin will receive $29,638,291 for restorations, a new fine arts building, and tennis courts.

“I got very fascinated when people started talking about the restoration of Austin and things like that. That’s why I am going to school. To make sure that everyone is doing everything right, to make sure Austin is being preserved,” Steven said.

Tipton wants to encourage students and alumni to be involved and volunteer to protect Austin’s history.

“Our students need to hear how Austin students have gone on and done great things in their life and students need that for inspiration and that’s what a museum could give them if we could get it together,” Tipton said.

For those interested in volunteering or donating items for the historic collection please email Hazel Tipton at hltipton@episd.org.