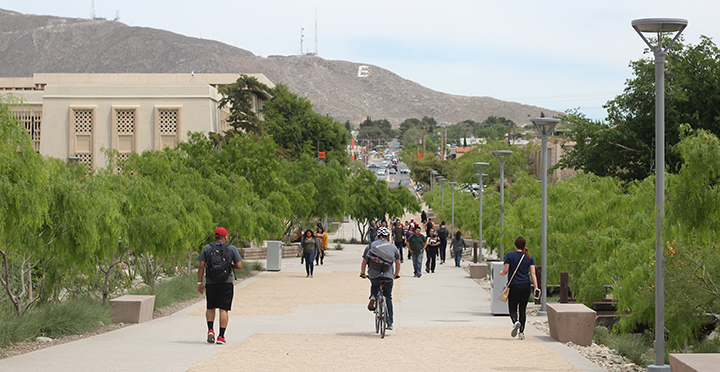 EL PASO – Hundreds of students cross the border from Ciudad Juarez to El Paso daily,  carrying heavy backpacks and books and dreams of a better life.  Heightened  anti immigrant  rhetoric across the country and various immigration enforcement executive orders from President Donald Trump have added more stress and uncertainty to their daily lives.

Over 1,000 Mexican students attend the the University of Texas at El Paso and about  half commute to campus from their homes in Juarez, across the Rio Grande from El Paso, according to a previously published story.

The commute is a hardship for many because of the long and complicated commute from their home in Juarez,  a walk  or a car ride across an international border bridge to have their documents checked, followed by a bus ride  to the UTEP campus some five to 10 minutes from downtown El Paso,

Most must wake up before dawn to make it to an early morning class, and often don’t return home to Juarez until well past the dinner hour.  Depending on the amount of foot or car traffic on the international bridge, the crossing time can vary from 20 minutes to two hours. The time it may take for Customs and Border Protection (CBP) officers to check their visas and other paperwork adds another measure of stress and unpredictability  to their school commute.  Some of the officers are nice, others not so, students say.

Although there is a formal process for persons to file complaints against CBP agents on the agency’s website, the agency says it does not release data on the number or kinds of complaints filed against officers and does not respond to requests for information under the federal Freedom of Information Act.

In March of 2015, the American Immigration Council, a national nonprofit that advocates for immigration reform, sued the agency to obtain records of all complaints filed against the agency by persons crossing international borders.  The case ended in a settlement in late 2016 that required the CBP to respond to FOIA requests more quickly, however they still handle their complaints internally without external oversight. One Juarez-El Paso commuter is a 20-year-old communication major at UTEP who describes her almost daily encounters with CPB agents at the checkpoint stressful. She asked that just her initials, V.R., be used for  this story.

V.R. recalls one time when she was feeling exceptionally anxious as she crossed a  border patrol checkpoint.

“I wasn’t really paying much attention to what the CBP was saying because I was dealing with my anxiety and then the CBP yelled at me, ‘do you even speak English?’ Kind of like you’re dumb. And sometimes I see that a lot.”

The incident left her feeling “demoralized,” she said. “I got to school and I felt like,  you know what, I don’t want to be doing this anymore. I’m just going to drop out. I have no necessity to go through that.” She did not drop out and is on track to graduate in the Spring of 2018. UTEP anthropology professor Dr. Christina Convertino says it is important to have more nuanced understandings about border crossing activities and their impact on student stress. Photo by Antonio Villasenor-Baca, Borderzine.com

Assistant Professor in socio-cultural foundations Dr. Christina Convertino is an educational anthropologist in her third year at UTEP and has done ethnographic research on students like V.R. that cross the border to attend school in the U.S.

Convertino understands the added stresses that students encounter in their daily cross border commutes. She said the added stress not only deters students from getting the most out of their education, but are unnecessary. Addressing this issue becomes more complex because people on the border have normalized that commute, she said.

“I think also it is really important on sort of a local level as well as a wider level for us to have these more nuanced understandings about border crossing activities that complexify or problematize the sort of wider narratives that you see in mainstream media that don’t reflect the daily activities and the daily lives of the people actually living on the border,” Convertino said.

Commuting through the border to school by Brandon Gomez, Pavement Pieces on Vimeo.

Some students say that how they are treated by agents when crossing the border, in addition to the usual worry about exams, homework, registration, finances and  finding work, sometimes make them question whether the effort is worth it.

Convertino said she understands how students might do a “cost benefit analysis” of the emotional cost of the commute with the benefits of getting a U.S. degree, and decide to study in Mexico.

“I could see how a student would arrive on campus after an interaction like that, or after day after day of having to get up at 4:30 so they can cross at 5:30 and then stay on campus all day long and then have to go back… might really deter the student from pursuing or continuing with their studies,” she said.

Another deterrent for them, she said, is what happens after they arrive on campus,  “where most, the majority of instructors and peers with whom they’re interacting are not cognizant of their experience.  I think that would also impact a student’s sense of connectedness to the institution, their sense of belonging.” UTEP Mechanical Engineering Major Elias Castillo and Civil Engineering Major Erick Ortega, both 20, face an almost identical commute to school.  Castillo is a U.S. citizen who lives in Juarez with his parents. Ortega is a Mexican citizen, lives in Juarez, and has a student visa to attend UTEP.  The say their daily crossing to attend UTEP is usually smooth and without incident, except for one time when Ortega he lost his SENTRI Card and the border officer took  longer than usual  to check his documents and even searched his backpack.

The SENTRI Card is an express pass that  allows Juarez residents  to drive across the border checkpoint bridges  through a special express lane. The application process for the SENTRI Card requires a $25 application fee and a wait for an interview. If accepted for the card, there is a fee of $129.99 plus additional fees which in total can cost over $200.

A constant concern for Ortega, he says, is that his SENTRI Card can be taken away without explanation.

Pamela Morales, a 27 year-old medical student at the Universidad Autónoma de Ciudad Juarez, in 2014 had an unpleasant encounter with CBP agents that resulted in having her SENTRI Card revoked.  This was after the Department of Homeland Security began inspecting cars heading south from El Paso to Ciudad Juarez in an effort to curtail the traffic of unreported currency, weapons, ammunition and export violations.

At the time of the incident, Morales worked for the El Paso Hispanic Chamber of Commerce and commuted from her home in Juarez to her job in El Paso almost daily.

She said one evening on her way home from work she was stopped at by CBP officers southbound at the Americas bridge  because she was holding a cell phone. One of the agents began yelling at her and knocked violently on her car window.

“I felt bad because they were screaming at me as if they had found seven kilos of drugs on me,” Morales said.  When she asked the agent his name in order to file a complaint, the agent responded with, “Perez. I won’t say any more.”

Morales said she was then given a ticket by an officer with the El Paso Police Department for using her cellphone at the border checkpoint, and that the CBP agent that yelled at her asked her for her ID and insurance card.

When she told him she wanted to file a complaint with his supervisor, the agent removed her passport and car keys and requested she wait inside her car until the supervisor arrived.

After waiting for about an hour and “feeling stressed” because she knew her mother who waited for her at home would be worried, Morales she said she decided not to file a complaint, left her car and walked over to the agent to let him know her decision.

“He turns to me and starts yelling again: ‘What’s wrong with you! Who told you that you could get off your car? Get in your car right now!’ Again, everybody passing by is looking at me (and thinking) oh my god, what’s happening, because he really was yelling at me.”

She returned to her car to wait for the supervisor.

When he arrived, she said she fared no better.  She says the man raised his voice and told her she was partly to blame for what had happened because she wasn’t paying attention. Eventually she was allowed to leave the inspection point and cross into Juarez.

A week later, when she crossed from Juarez to El Paso for work, she said she was stopped at the express lane, told her SENTRI Card had been revoked and asked her to go to the main SENTRI offices at the Zaragoza Bridge to find out why.

“I think it’s the worst lack of respect between nations that I’ve seen in my entire life,” said Morales, who has a finance degree from St. Edward’s University in Austin.

“I don’t even think that the people at the CBP that work there have any idea of what it is to live on a border… to know what it is (like)  to be there (in line for) two hours when you have to go pick up your child.”

For his part, Ortega says he’s become more sensitive under the Trump presidency to how politicians and some news outlets portray undocumented immigrants.

“It stings, a little,” he said. “It got me thinking about how people struggle to get here and now they have to struggle even more.”

This story is part of Borderzine’s Borderlands 2017 project where journalism students from the University of Texas at El Paso and New York University teamed up to report on immigration and border issues in a variety of multimedia platforms.  Students worked together in the spring of 2017 and spent several days reporting and telling the story of the people who live on the border.