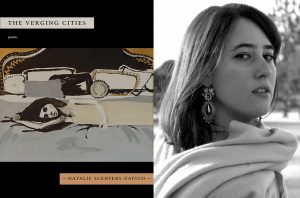 Natalie Scenters-Zapico, who was an undergraduate Creative Writing major at UT El Paso, has won the prestigious 2017 PEN/Joyce Osterweil Award for Poetry, for her collection of poems “The Verging Cities.”

“From her undergraduate writing career at UTEP, she went on to become a fully-funded graduate student at the University of New Mexico, and is now one of our country’s most literarily-recognized emerging writers,” said Sasha Pimentel, assistant professor of poetry and creative nonfiction at UTEP.

Judges for the award said the collection, published by the Center for Literary Publishing, Colorado State University,  shows Scenters-Zapico is an “an important emerging poet whose formal and tonal range in The Verging Cities is impressive and disarming.”

Scenters-Zapico’s style brings the border to life, the judges wrote:

“Her voice is honest, engaging, and complex as she explores the liminal space of the U.S./Mexico border with vivid imagery that moves fluidly between Juárez and El Paso. At times both tender and funny, she writes so that the border becomes not just an idea, but a rich and real world. With poems that are as intelligent as they are urgent, Natalie Scenters-Zapico offers a necessary poetic voice in these perilous times.”