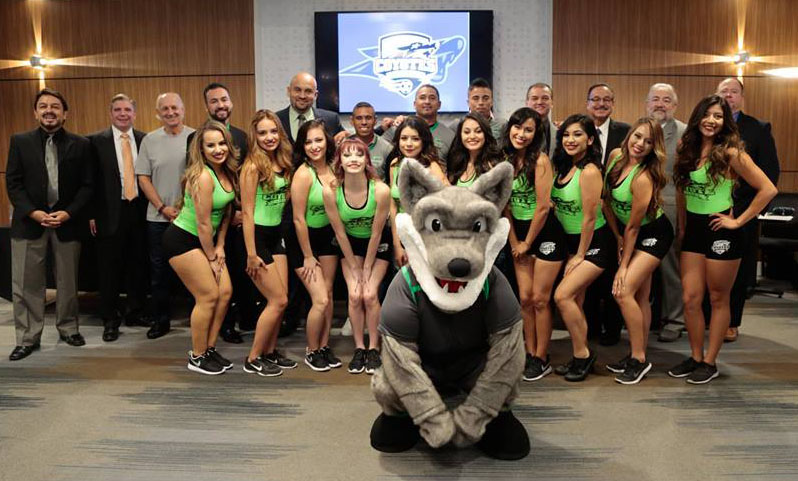 The city of El Paso welcomes a new professional-level dance platform known as the El Paso Coyote Girls, the official dance team of the El Paso Coyotes soccer team. For dancers all around the community, the addition of the new team brings more opportunities for local dancers who aspire to perform on for a large audience and engage in community outreach. The women are not paid for their work.

The Coyote Girls debuted the team on Nov. 4 at the home-opener match against the Dallas Sidekicks, where the El Paso Coyotes fell 14-7 at the El Paso County Coliseum. There are 16 women on the dance team.

Tryouts for the team were held in this summer, in July, where dancers were judged on combinations of choreography, personality and spirt, dance technique, as well as overall image. In addition, all members were required to have prior dance experience, whether on a high school team, studio or college team.

“I am ultimately the decision maker for the team when it comes to business aspects for the team,” Aleman said. “The captains create their own choreography and they are free to do what they want with a small filter, me being that filter.”

The team captains are Stephanie Rodriguez, Robin Monilla, and Karen Portillo. They were chosen as captains on a tryout basis in front of a judge’s panel, including the El Paso Coyotes team owners. As team captains, their duties are to produce choreography, choose costumes, lead practices, and conduct tryouts for each routine.

The Coyote Girls perform a halftime dance, mini routines for the quarters, and stand routines that they do in the stands and throughout the coliseum. However, not every dancer is guaranteed a position in each routine just by simply being on the team.

“Every girl needs to try out for every routine before a game or performance,” Rodriguez said. “It is an entertainment team along with a dance team, so when they tryout not only must dancers know the routine, they need to perform it with high energy, and that is what we look for.”

Rodriguez brings a background of dance experience as a team leader. When she is not dancing with the Coyotes, Rodriguez works at LAT Studios as a coach for the studio’s competitive teams and teaches ballet, jazz, and hip-hop. Rodriguez also cheered for over four years, began her dance career on the dance team at Canutillo High School, and then went on to join a student-run dance organization, Allegro, at the University of Texas at El Paso (UTEP).

Current Coyote Girl, Adriana Sarabia, is a former UTEP Golddigger who has auditioned for the Dallas Cowboys Cheerleaders and the Dallas Mavericks dancers. Sarabia’s pedigree in dance consists of training in ballet, jazz, hip-hop, and cheerleading from the young age of six.

“When I heard of a professional team in my own hometown I decided to audition,” Sarabia said. “It’s all been great and exciting, and it is the first dance team at the pro level in El Paso. The Dallas Cowboys Cheerleaders has always been a dream of mine, so hopefully my experience with the Coyote Girls can help me get there.”

The Coyote Girl’s season began in the summer after tryouts where the selected members went on to complete a summer boot camp session. The camp was a month long where dancers would train at their sponsored gym from as early as 5 a.m. every day, followed by daily night practices to learn technique and choreography.

The Coyote Girls have a partnership with gym Ratio One 61 where they are required train up to three times a week as part of the team rules. The dancers also practice routines for the games twice a week.

“The Coyote Girls is a very image-based team,” Rodriguez said, “therefore the dancers need to be healthy, have proper nutrition habits, and workout to maintain a healthy body image.”

The El Paso community is supportive of the up-and-coming dance team. The Coyote Girls have numerous sponsors such as LAT Studios, Ratio One 61 gym, the El Paso Coliseum, several hotels and local clothing businesses.

The Coyote Girls will produce official merchandise that will be available to fans in order to create their brand in the community. Clothing and posters will be available for the public to purchase in the near future.

“We are still in the first phase of the team since it is a brand new program,” Aleman said. “We plan to bring in choreographers in the future to give us new pieces, as well as engage more with the El Paso community.”

The Coyote Girls are hopeful to hold youth dance classes and engage with young dancers in El Paso who aspire to grow as dancers and gain experience. LAT Studios has two locations, east and west, and the studios have a well-recognized dance division to aid their efforts.

Information on the Coyote Girls can be found on their website, and at LAT Studios where news and updates on events and upcoming tryouts will be announced.