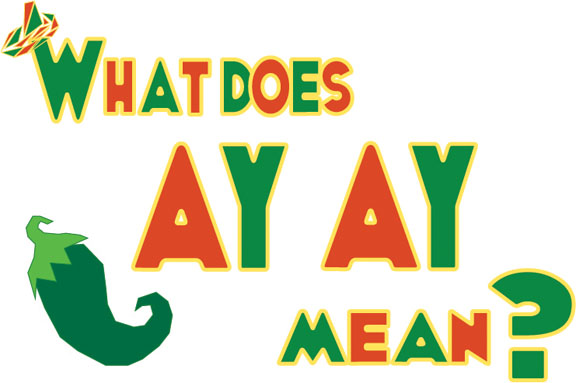 Ay ay is one of those cultural slang words that has a meaning but just cannot be defined. If you’re from El Paso you know what it means, but can you define it? Not really. You can try to, but you will have a hard time.

I went went around trying to see if I could find a good definition of this phrase online but nothing really came up. I ran into an Urban Dictionary definition of it. However, it really didn’t give a helpful response.

“Used heavily in El Paso, Texas, USA and Ciudad Juárez, Chihuahua, Mexico, “ay ay” is the repetition of the Spanish word “ay” which is equivalent to the interjection “oh” of the English language. When “ay” is said twice, i.e. “ay ay”, it functions as an expression or acknowledgement of frustration, absurdity, disdain, and other “negative” feelings.” – Urban Dictionary

It also appears to be spelled a lot of different ways. This discussion on the language usage stack exchange lists the following variations used in the Power Rangers series:

When I first moved to El Paso from Los Angeles I would hear my classmates say, “Ay, ay” and I was puzzled to understand what it meant. I remember asking them what does it mean and they themselves did not know. As I grew up, my friends told me it is like trying to say, “really?” – but your are not saying really. For example, let’s say you are having a conversation with some friends, someone cracks a joke and everyone laughs. Then someone may just respond with an “Ay, ay!”

Ay, ay is not the only only word that can not be translated from Spanish to English. There are several and its pretty hard to define them. I found a video that tries the attempt to define words that done have a definition or translation. It actually interesting to watch the attempts.

Over the years I have been able to make my own assumption of the phrase. It is like a verbal filler for El Pasoans. Like “words” like, “shhh” or “darn” which have a meaning, but are not really defined. When we say “ay, ay” to give a response in our conversation it changes definition with emotion and tone. It can be a humorous response or an empathetic one. It varies.