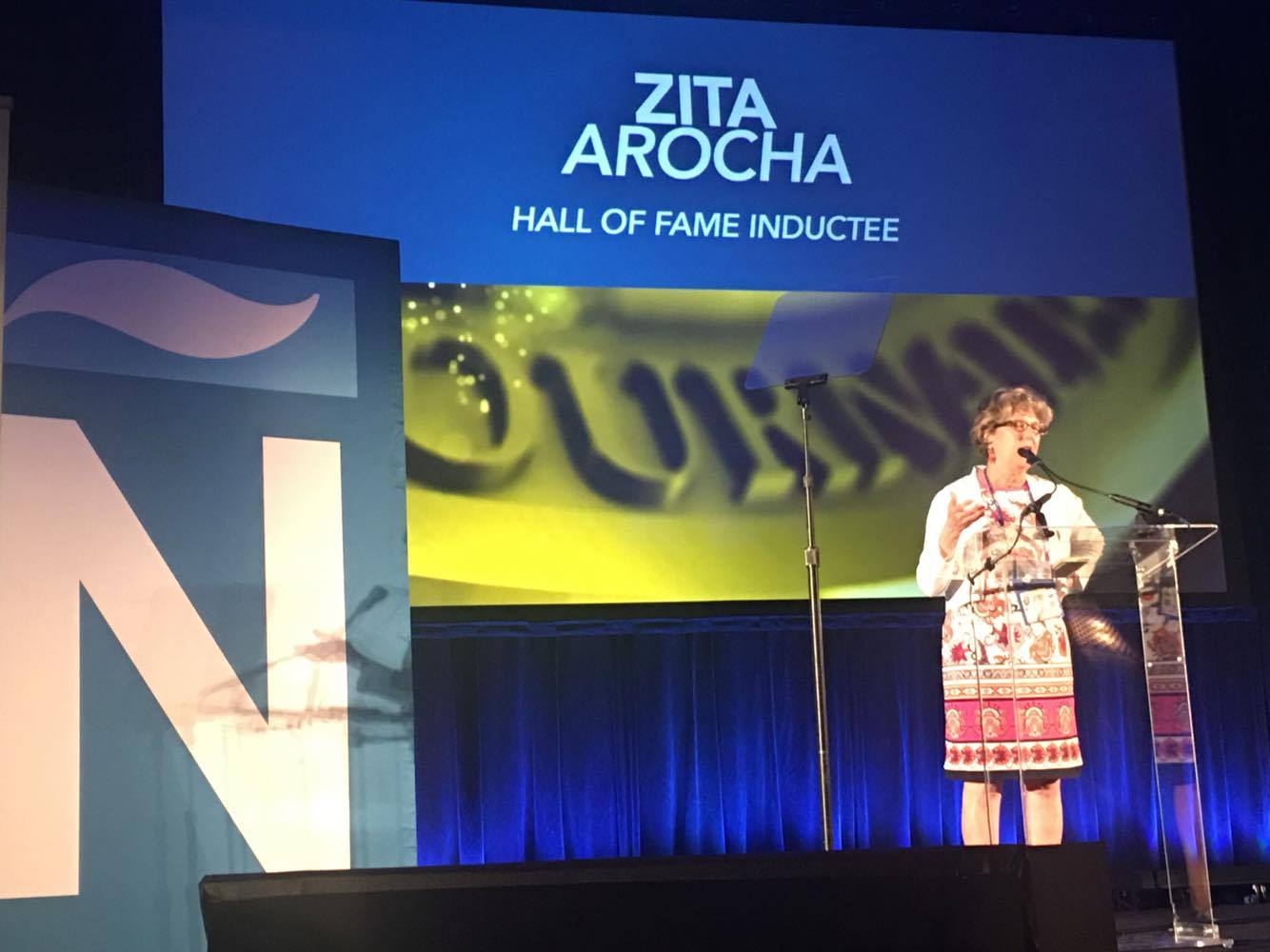 By Rene Delgadillo, UTEP Prospector
UTEP Associate Professor of Practice Zita Arocha was inducted to the NAHJ 2016 Hall of Fame on Friday, Aug. 5, for her journalism career and for serving Hispanic and Latino students.

“I think it is a huge honor for UTEP because it really focuses attention on what we’ve done there over the last 14 years, and by that I’m talking about the whole team in our department,” Arocha said. “I feel really blessed and privileged to have had the opportunity to spend 14 years for preparing the next generation of bilingual, bicultural journalists.

At the ceremony Arocha said, “ if you don’t know about UTEP, it’s scrappy little school on the border, we kick butt, we really do.”

Arocha, a former NAHJ executive director and current director of multimedia web magazine borderzine.flywheelsites.com, said her students give her the strength to continue each day.

“I don’t deserve this,” Arocha said. “I really think that my kids are the ones that support me and give me the continued desire and passion to work on their behalf.”

“She’s a marvelous human being, she is so dedicated to journalism, to Hispanic students,” Smith said. “She has never given up, she has tried to make this industry better, and she has tried to reflect the people who make up this country.”

Arocha is a Cuban journalist who came to the United States after her parents left Cuba to escape poverty.

After earning a degree in English she was unable to find a job, but with a strong will to succeed she went to her local newspaper at Tampa, and it was there where her love for journalism began.

Arocha was able to jump from being the front desk news receptionist to becoming a reporter at The Tampa Times, The Miami Herald and The Washington Post.

When Arocha came to UTEP in 2004, her dedication and desire to help young journalists came as well making an impact on students.

“She’s always there and willing to do that extra step in order for the students to achieve whatever they want to do,” said Tony Castaneda, senior multimedia journalism major. “She’s the type of professor that’s there for the students, she is an example of someone that every student wants to become.”

Arocha said that journalism at UTEP has to keep growing to allow border students to make a difference in the news media.

“We need to get media companies and media foundations focused on that next generation and preparing them and giving them the tools that they need,” Arocha said. “There has to be a greater investment by media and by media foundations in educating the kids.”

Arocha wants to continue helping the younger journalists, saying that not even retirement will never part her from her love and passion.
“I don’t like to think there is ever a capstone to a career, I don’t believe that. There is much work to be done,” Arocha said. “I can’t see journalism not being part of my life as I move forward, it’s always been there and will always be there.”

Editor’s note: This story was previously published on The Prospector.