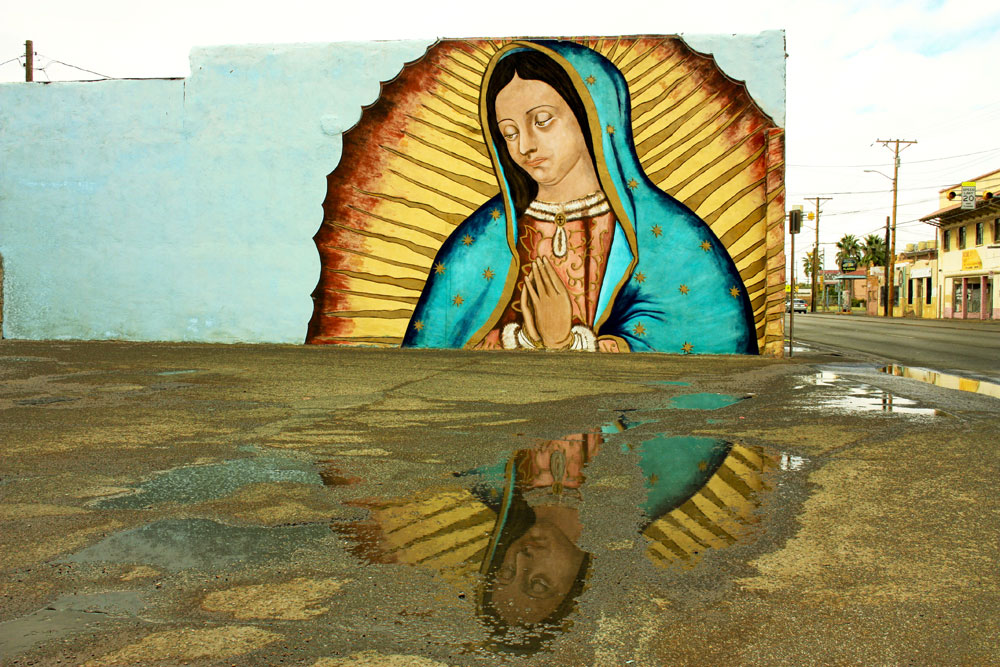 Reflection of the Virgin. The mural of the Virgin of Guadalupe is located next to a gas station in the Lower Valley of El Paso. Photo by Cynthia Carol Almodovar, Borderzine.com

Although Catholicism is still the most prominent faith in the El Paso region, it is following a national trend of declining numbers of adherents, particularly losing its hold on younger people who now tend to prefer personal expressions of faith rather than institutionalized religions.

According to the website thearda.com in 2000 the number of Catholics in the border city was 349,866 or 51.5 percent of the El Paso County Population. Over the last 10 years, that number has steadily decreased and now stands at 43.2 percent of the population.

The El Paso statistics mirror those of the U.S with the percentage of Catholics decreasing and number of non-affiliated persons growing rapidly. Although Hispanics play a huge role in the religious shift, there are greater numbers of white Millennials becoming unaffiliated at faster rates than Hispanics or African Americans.

“Many people who have left main stream religious communities, particularly younger people, claim that they no longer feel these faith communities represent their values and beliefs,” said Director of Religious Studies at the University of Texas at El Paso Dr. Ann Horak.

“One good example is the rights of the LGBT community,” she added, explaining that LGBT members and allies of the groups are transitioning to more open religions with accepting communities.

Father Angel Maldonado of Socorro Mission La Purisima said although religion is still an important aspect of our lives and culture, young people, while not rejecting religion all together, are more focused on the economy and the present circumstances of the world and where they fit in it.

“We’re living in a world of tremendous religious indifference,” Maldonado says, “The young person thinks of only himself, unfortunately. It’s a lot easier to say, ‘what do I need’ instead of saying ‘what does everyone else need?”

Maldonado added: “It’s safe to say that young people don’t really think of their actions. They live only in today and for today but that is not the purpose of the church. It is important for us to understand Jesus’ message, and that is the problem with the young people, they are looking for a message that they’re not going to find.”

With the decline in young churchgoers, scholars and religious leaders agree that whether the church begins to thrive once again will be determined by how well the church adapts to modern societal beliefs about contraception, gay marriage and divorce.

For example, Pope Francis, the head of the worldwide Catholic Church, who recently celebrated mass in Ciudad Juarez as part of a missionary trip to Mexico, has raised eyebrows with progressive messages on these issues. Some see his ministry on social issues as a way to relate to younger generations and welcome Millennials back to church.

And, although younger generations are drifting away from traditional religion, they still identify with some aspects of religion.

The same Pew Research Center survey that brought to light the rapid decline of Millenials claiming a religious affiliation, also found 80 percent of them still believe in God.

The survey also found that increasing numbers identify with statements like: “I feel a deep sense of spiritual peace and well-being” or “I experience a deep sense of wonder about the universe.”

Nicole Rodriguez and Andrea Macias are both students at UTEP and feel they have their own personal connection with God. They said they do not attend church and were raised in traditional Christian families.

“I think once I started college I became less religious because I didn’t have time for it, but I’m still a faithful person and have a relationship with God, but I do not attend church,” said Rodriguez, 25, who studies multimedia journalism.

Macias said she considers herself religious but believes that people have their own way of practicing now.

“I usually don’t attend church but I do pray almost every night,” said the 20-year-old journalism major.

“I have my own personal connection with God and I have faith in him. Yes, I think I am a part of that Millennial phase. I think religion has become more open and there’s different ways people practice now. Just because you don’t follow the usual order of things doesn’t mean you’re not religious.”

Horak says religion will continue to adapt as culture changes and the continuing decline in people’s affiliation with institutionalized religion is neither positive nor negative.

“Religion is interwoven with culture. Culture is fluid and ever changing, and so is religion,” Horak said.

“Religious groups in the United States, for example, used to justify slavery through religious texts and teachings, and the culture in many areas of the U.S. accepted this belief. This had to change. Religion will evolve as it has always done and the people belonging to those religions will change as well.”