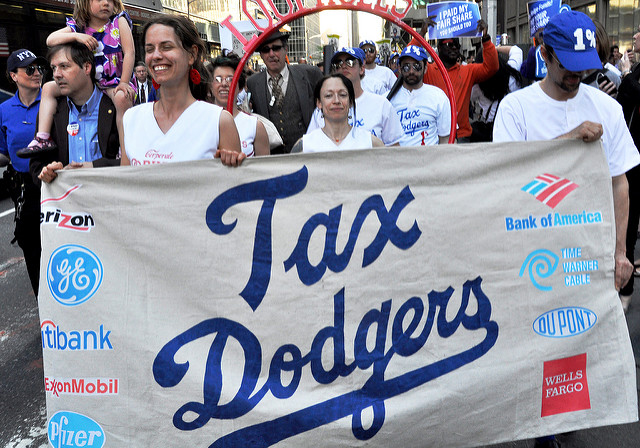 WASHINGTON – The 50 biggest U.S. companies relied on a secretive network of more than 1,600 disclosed subsidiaries in tax havens to stash more than a trillion dollars offshore, according to an Oxfam America report released Thursday.

The analysis shows how large U.S. companies use tax havens and other loopholes to dodge paying their fair share of taxes, according to Oxfam. The actions by multinational corporations cost the U.S. about $111 billion each year.

Oxfam America is an international relief and development organization with the goal of creating solutions for poverty, hunger and injustice. It held about $95 million in assets in 2015.

The companies may also have failed to disclose thousands of additional subsidiaries to the Securities and Exchange Commission because of weak reporting requirements. Companies disclose information in 10-K filings with the SEC.

“It’s not that they’re breaking the laws, it’s that the laws are so poorly designed that they allow people, if they’ve got enough lawyers and enough accountants, to wiggle out of responsibilities that ordinary citizens are having to abide by,” President Barack Obama said during a White House press briefing last week.

It sticks the rest of us with the tab, Obama said.

“Taxes pay for a lot of very important things in this country,” Field said. “There’s a lot of good things that happen when we pay our taxes.”

Nearly seven out of 10 Americans believe corporations pay too little in federal taxes, according to a 2015 Gallup poll. Despite this, members of Congress in both parties and business leaders have argued the exact opposite.

Billionaire activist investor Carl Icahn sent Congress a letter in October outlining his plan to dump $150 million into a super PAC to push legislation that could lower U.S. corporate taxes on foreign profits.

“It’s a no-brainer for Congress to pass a highway bill that includes international tax reform,” Icahn wrote, stating that if the legislation isn’t passed, many U.S. companies will invest their money outside the country.

Icahn holds 45.8 million shares in Apple, according to a February CNBC report. Apple holds $181 billion in offshore accounts, more than any other American company.

Not all political and business leaders hold this ideology.

Sen. Elizabeth Warren, D-Mass., said during a speech at the National Press Club in November, that the legislative battle over fair taxes between large corporations and working Americans isn’t fair.

“The corporate giants are lined up to make sure tax changes tilt their way,” Warren said. “America’s working families don’t have a zillion-dollar PR team to counter the false claim that corporate taxes are too high.”

Researchers at the University of Texas, the University of California and New York University have found that increasing lobbying expenditures leads to paying less taxes in the following year. The top 50 largest companies collectively spent about $2.7 billion on lobbying in D.C. from 2008 to 2014.

“These companies collectively are receiving very generous amounts of support for their operations,” Judy Beals, director of private sector engagement for Oxfam America, said. “They’re using their political muscle in ways that are further rigging the system.”

As a former corporate tax accountant who worked for 15 years for companies, ranging from small to multinational, Field said she saw how much time and money was spent avoiding taxes.

“There really shouldn’t be a get-out-of-tax-free card,” Field said. “There shouldn’t be special rules for only the largest and most profitable. It’s time to stop this corporate welfare system that we have in this country.”

The Oxfam report comes in the wake of public outcry after a leak of more than 11.5 million financial and legal records shed light on how people use secretive offshore holding companies to hide cash. The investigation, called the Panama Papers by an international consortium of journalists, revealed information connected to people in more than 200 countries and territories.

Several companies, including ExxonMobil, have responded to the Oxfam report. “ExxonMobil operates in dozens of countries all over the world,” Exxon stated. “The corporate governance rules in these countries vary considerably.”

Exxon is an American multinational oil and gas corporation headquartered in Texas. The company pays 41 percent of its revenue in taxes – well above the average rate of 26 percent for the 50 companies on the list.

It’s sometimes sensible to incorporate affiliates in different countries with stable corporate governance rules, including countries that some refer to as tax havens, the company said.

Other companies, including General Electric and Morgan Stanley paid as little as 7 and 8 percent in taxes, respectively.