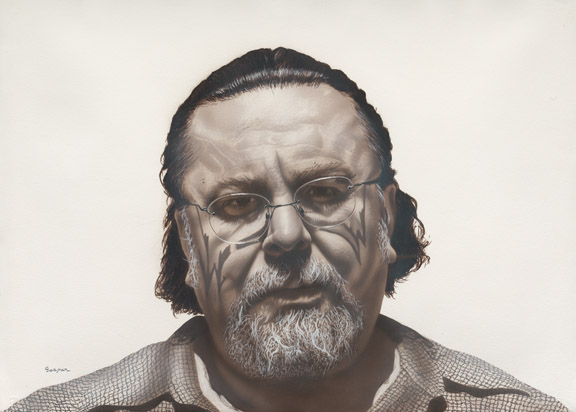 WASHINGTON – When someone looks into a complete stranger’s eyes he gets a glimpse of the stranger’s personality or character. When the person notices the stranger’s mud-covered feet, she might understand the stranger’s hopes or desperation. Gazing at these strangers for a moment can spark an interest in who these people are and what their stories are.

These are the kinds of emotions Gaspar Enriquez and Rigoberto Gonzalez, two of the three Latino artists chosen as finalists for the Outwin Boochever Portrait Competition, hope to provoke through their paintings.

Every three years, the Smithsonian National Portrait Gallery seeks work from artists from all over the country to highlight the art of portraiture. In its fourth edition, the competition received over 2,500 submissions. It chose 43 finalists, whose works will be on display through Jan. 8. This is the first time three Latinos were among the finalists.

“I’m very proud to have these three artists who represent the older generation of Latino art … and also some artists who are still making their way, really emerging and starting to get established and known,” said Taina Caragol, the Smithsonian’s curator for Latino art and history. “I just love that that happened spontaneously at this show.”

Enriquez, 73, a native of El Paso, Texas, submitted a painting of his friend and fellow Latino artist John Valadez. His subjects are always someone he knows, a relationship he can portray on the canvas. Having a portrait of his showcased at the National Portrait Gallery is important to Enriquez, who hopes Chicano art will be highlighted more often around the country.The judges look for technical mastery and representation of the human element in every submission.

“It’s a great honor,” Enriquez said in a telephone interview. “Usually, as Chicanos we’re pretty much out of the mainstream as far as galleries and museums, and it is an honor to be able to break through that glass ceiling.”

Although there is no specific definition for Chicano art, Enriquez  described it as usually dealing with subject matter that relates to Mexican-American culture. Visitors at the Smithsonians National Portrait Gallery look at Gaspar Enriquezs John portrait. Enriquez and 42 other artists works were chosen from 2,500 submissions for the portrait competition that is held every three years. SHFWire photo by Luis Gonzalez

Enriquez said  that Chicano artwork has almost exclusively been promoted by fellow Chicanos. Collectors, including actor Cheech Marin and San Antonio collector Joe Diaz, have been among the main patrons for Mexican-American artists. Museums and galleries provide the mainstream platform that can showcase Chicano art all over the country.

“There’s hundreds of us trying to make, not necessarily a name, but to have our work exposed to the rest of the country or even the world,” Enriquez said. “There’s only a few of us that have been able to do that.”

Gonzalez, 42, who lives in Houston, grew up following Enriquez’s work and being part of an exhibition alongside him made the selection of his portrait that much better.

“It’s one of the biggest achievements to have a painting exhibited there in the Smithsonian,” Gonzalez said in a telephone interview. “It was very inspiring to be there in the show with Gaspar.”

The portrait Gonzalez submitted depicts a girl guiding Mexican immigrants as they cross the border from Ciudad Juarez, Mexico, to El Paso. “I hope with the painting to make people just a little bit more aware,” Gonzalez said. “When you hear the word immigrant, there’s an actual person that is going through that, that is fleeing a certain problem or a certain condition and that’s what I try to do with that, show that desperation and also the hope of finding a better life.”Immigration is an important subject all around the country, and Gonzalez addresses it in his art. It’s not  only recognizing it as a part of his culture but also as a way to educate the rest of the country.

After the exhibit at the National Portrait Gallery closes, the portraits will travel to three other museums from February 2017 to June 2018 – the Tacoma Art Musuem, Tacoma, Wash.; the Art Museum of South Texas, Corpus Christi, Texas;  and the Kemper Museum of Contemporary Art in Kansas City, Mo.

Baltimore’s Amy Sherald was selected as the first-prize winner. She received $25,000 and a commission to create a portrait for the museum’s permanent collection. Gallery visitors can vote in person or online for the People’s Choice Award which will be announced Sept. 20.

“Hopefully there’s more Chicanos going in there and participating get accepted and maybe win awards too,” Enriquez said.