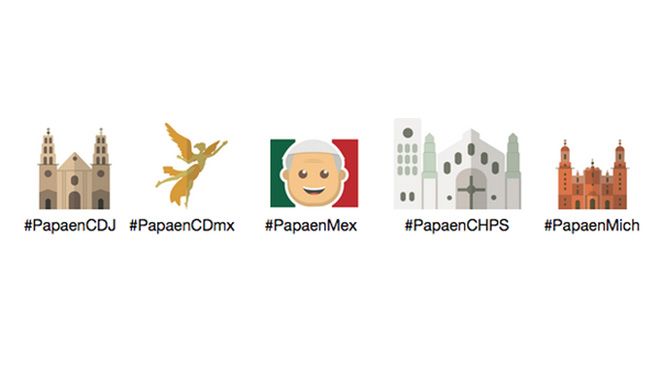 Tweet
Pope Francis’ visit to the border Feb. 17 will be a day full of self-reflection and selfies as the faithful gather to hear his message from the streets of Juarez, Mexico, to the edges of the Rio Grande overlooking El Paso, Texas,

The Vatican and local Catholic missions have expanded their outreach on social media channels like Twitter, Facebook and Instragram In an effort to appeal to young followers, Others have joined in with accounts and hashtags to create a platform for their own views ranging from a celebration of faith to drawing attention to their cause. Twitter also created emojis for when the pope visited the United States in September. There are four in total – #PopeInUS #PopeInNYC #PopeInDC and #PopeInPhilly – which depicted the pontiff with local landmarks like the Statue of Liberty, the Liberty Bell and even indulging in a Philly cheesesteak sandwich. Pope Francis is the first pope in history to have a Twitter account, which he uses to post messages of peace. His @Pontifex account has around 26 million followers. The Vatican (@newsva) maintains accounts in nine different languages.

#PopeFrancis #papaenmex #popeinmexico are just some of the hashtags that are being used by the Twitter users tracking the pope’s visit to Mexico. The hashtag #papaenmex is one of the most popular, with a 3,279 retweets per hour, and a hashtag exposure of 55.17 million per hour, according to Rite Tag.

The Catholic Diocese of El Paso (@elpasodiocese) is using #2Nations1Faith for its “Two Nations, One Faith” event featuring a simulcast of the papal Mass for thousands of faithful in the UT El Paso Sun Bowl.To get more updates.

St. Pius X Church in El Paso created a Facebook group called People from El Paso at the Pope Mass in Juarez for people to post photos of their activities throughout the day.

The City of El Paso created a website called www.pope915 to keep the public informed of travel restrictions, road closures or other city services. The community is also very involved in the social media using different hashtags to get information about what is been going on with the Pope’s Visit, You can also follow along using #Pope915 on Twitter and here on Facebook.

The multimedia student journalists of Borderzine.com will also be out in force on both sides of the border sharing updates using the hashtag #Popezine. Some groups are using social media to bring attention to causes. The Ignation Solidarity Network is using #Pope2Border to highlight the plight of people migrating through Central and North American. The keyboard app of pope icons Swyft Media developed for Pope Francis’ trip to the U.S. East Coast in September can also be used to punctuate social media here.

The free app provides keyboard functionality for texting 52 emoji and 14 GIFs of Pope Francis. The app is available for iOS and Android.

“The Pope has a great sense of humor, is totally approachable and dedicated to engaging people where they communicate,” said Kathleen Hessert, founder of Sports Media Challenge, which is overseeing the digital aspect of Aleteia.org’s effort.”By engaging millennials, we’ll enable new conversations throughout Pope Francis’ visit.”