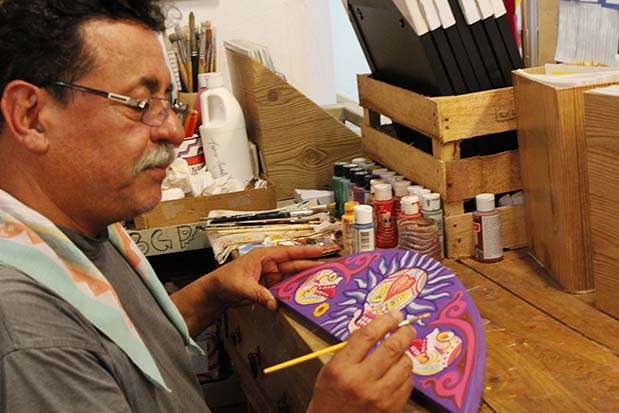 Born and raised in El Paso, Texas, Arturo Avalos grew up in area of town known as Segundo Barrio, one of the oldest immigrant neighborhoods in the city. As a first generation Mexican American, Avalos said the discrimination he experienced as a child growing up has had a deep impact on his art and life.

In elementary school he discovered his passion for drawing and was often scolded by teachers to complete his classwork instead of doodling. At the age of 12 he became a young activist after the mostly Mexican-American workers at Farah, a garment manufacturing company where his sister and neighbors worked, went on strike because of low wages, no medical benefits, work quotas and better working conditions at the company.

“I volunteered and did what they needed, handing out flyers, explaining our position,” said Avalos. Now age 59, he resides in the East Side of El Paso and says, “I wasn’t employed but I considered myself part of it because half of the people I knew worked there. I supported their cause.”

By the age of 16, he joined what was a new school club at Bowie HIgh School of Mexican Americans who complained about being sent to detention for speaking Spanish in classroom. The Bowie student body, along with other area high schools and parents, joined together in a walkout and challenged the EPISD about the practice.

After that battle, he and his fellow students faced another challenge in the late 1960’s. It was an era of hippies, young socially conscious young women and men who let their hair grow long. At Bowie and other schools, male students were not allowed to wear their hair longer than their shirt collar and were required to wear button-down shirts.

“Everybody was wearing long hair, and now we knew the power of collective action after the ‘Spanish Detention’ policy was lifted,” said Alvalos. In protest, the students, their parents and even their young siblings once again marched down to the administrative offices of the EPISD school board to complain.

“Hell no, let it grow!” they chanted outside the building. Once again, the dress code policy against males wearing long hair was lifted, although they still had to wear the button-down shirts.

“We were always fighting for better parks, better housing and better jobs,” he said. “I was part of that group that was being deprived of things so we decided to do something about it instead of complaining and whining,” he said.

When he was 18 or 19 he was offered offered the opportunity to paint a mural, which opened many doors for the artist who would paint many more murals in El Paso.

His work is inspired by the counterculture and pop art of the time in which he grew up. The first mural he worked on still stands today at 513 E. Father Rahm in Segundo Barrio and has become a symbol of the community.

“I like using art to educate, to inspire,” he said,

His work has progressed through out the years and continues to have a hint of pop art in the use of his colors. Recently his work has been creating smaller pieces of art which can be purchased at his gallery at 1501 Main Street in San Elizario, Texas.

Avalos says his art is influenced by Mexican muralists such as Diego Rivera, and his work draws from Aztec, Mayan, Incan and Native American cultures.

“It’s a statement, our culture is awesome and hopefully people can take that from my work,” he said.