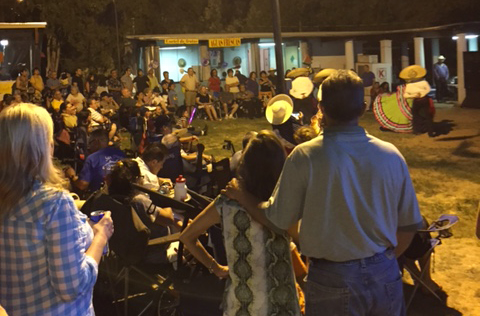 EL PASO –There are a lot of events going on in this city every September, but the annual St. Anthony’s Seminary Bazaar has become a must-attend affair, famous for its music, gorditas, enchiladas and family-friendly fun. “The enchiladas are the best I’ve ever had. I had nine yesterday. And I’m an enchilada connoisseur,” said 33 year old John Lloyd Gardner, who attended his first St. Anthony’s Bazaar four years ago and continues to come back every year.

Every Labor Day weekend, the sprawling grounds of the Franciscan seminary in the quiet Government Hill neighborhood of Central El Paso are filled with people of all ages alternating between lining up at food booths and carnival-style game booths to browsing tables of clothing, jewelry, crafts, crosses and rosaries.

There’s a bingo room inside, up the stairs. Downstairs, a long hall with rows and rows of tables is packed with people playing loteria, a Mexican bingo game where players place pinto beans on a 4 by 4 grid of pictures instead of numbers.

“Playing loteria while sipping a michelada is a must, as well as the BB gun game,” Gardner said. The crowd grows as the each day goes on, making it impossible to move around quickly. But no one seems to mind. There’s corn in a cup, karaoke and the Mexican children’s game, canicas. There are bands playing Mexican ballads and polkas in the front courtyard and in the backyard fairgrounds. “Everyone there feels like they’re your family, if only for a day,” Gardner said.

St.Anthony’s Seminary Annual Bazaar started 52 years ago as a way to raise money to pay the utilities for the seminary and to support the theological studies of Franciscan friars who hail from the San Pedro and San Pablo de Michoacan province.

St.Anthony’s Seminary was founded in 1936 by a priest called Fray Buenaventura Nava in a time when religious schools were being persecuted in Mexico. Nava was living in Tularosa, New Mexico and moved to El Paso to open up a seminary for young men from Mexico who wanted to study to become Franciscan priests. Nava searched for locations all over El Paso and found the found the spacious mansion at 4601 Hastings with a big garden perfect for the conventual lifestyle. The bazaar is run by volunteers, most of whom are members of local Catholic parishes. Much of the food and supplies needed for the bazaar comes from donations from local businesses.

“Every year I look forward for the Bazaar, and help out in every way I can. I considered it a tradition to come every year and to do one’s bit,” said 22 year old Alejandra Esquivel, who volunteers in the nachos booth.

“I think the bazaar is a great event that people can enjoy along with their families and relax but (they are) also helping the Catholic church and helping the Franciscan religious friars.”