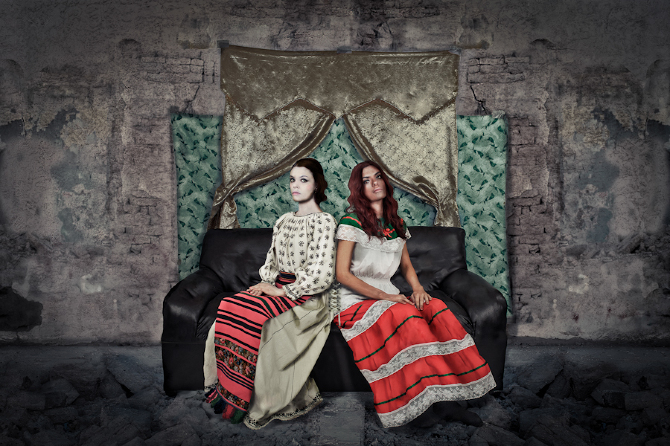 From the series Metaphors of a fragmented hybridization by Sabina Loghin

JUAREZ — The photograph is a self-portrait. But it shows two women — two manifestations of the same woman, a woman who calls herself a hybrid, a dislocated immigrant who still feels at home in a strange new land as she attempts to uncover her own special identity.

“I experience a kind of dislocated identity, which I think it’s very common in migrants; feeling like outsiders,” said photographer Sabina Loghin who emigrated from Romania to Mexico when she was four years old. Far from resenting the lack of a visible community from her home country in Cd. Juarez, Loghin embraces her unique hybridization, and acknowledges it as the main inspiration for her art.

Loghin said she cherishes the benefits of living between cultures. “It can be hard, but it helps you to be more versatile when you visit foreign places. It makes it easier for one to adapt to whatever changes.”

“What attracts me is one’s own crisis. In my case, it is my diffused identity.” Through her photography, Loghin depicts what she calls a “culture hybridization” between two societies very different from each other, and which, nevertheless, can be found in her own family’s life story.

“If I hadn’t grown up here, I would be a different person,” she said, with an accent so typical of people of Cd. Juarez – which people refer as ‘golpeado,’ – that, at first it is hard to believe that she was born in a place almost 7000 miles away from the Mexican border. Only the brown gypsy eyes that dominate her face give her away. Her name too.

She was born in Transylvania, Romania, a place known in popular culture as the homeland of Dracula, and which has been long represented in films and literature as a land of mystery and magic.

it is no surprise that Loghin decided to honor her family’s artistic heritage by becoming an artist. Her parents were also artists – her father, Doru Loghin, a professional violinist who played for the Brasov Philharmonic Orchestra, and her mother, Mugurasa Loghin, a theater actress. Loghin and her family emigrated to the capital of Chihuahua, where her father was offered a position in the city’s orchestra. The Loghin family spent 12 years there before moving to Cd. Juarez, where Loghin’s father was hired in the in the newly created music department of the Autonomous University of Ciudad Juarez (UACJ) . After eight years of living in the borderland, Loghin said they have learned to love it and to call it home. “It wasn’t easy,” said Loghin about moving to a country so different from theirs, “Especially for my grandma. She had lived her whole life in Romania so she had a hard time getting used to the Mexican culture, which was so strange to her. The older you are, the harder it is to adapt. ”

On the other hand, Loghin’s parents were able to adapt to their new life in Mexico much more easily, since, according to her, young Romanian people tend to leave and not to return.

“They love Mexico. My dad has always been fascinated by the Mexican culture.”

Loghin said her father even wears traditional Mexican styles, such as the famous crocodile boots and belts, as well as cowboy jeans. As for her, even though she has almost no clear memories of her native land, she can sometimes feel like an outsider.

She attributes this to the strong cultural identity found in Mexico.

“One tends to blend into the Mexican culture instead of reinforcing one’s own culture. I see this in our little habits such as food, or traditions. We too say ‘Happy Mexican independence day!’ because one starts loving the country where one lives. If it wasn’t this way, you wouldn’t be living there in the first place. ” Loghin says it feels like her family is the only Romanian presence in the city.“We used to know other Romanians, who lived in El Paso, but they left,” Loghin said. “I don’t know why they left; maybe they were looking for a bigger city with a bigger Romanian community.”

This same reasoning led Loghin to go to New York through an academic program. With the intention of learning more about her roots, she spent a summer doing fieldwork in the Romanian community there, which is the biggest Romanian community in the United States. The experience was more rewarding than she anticipated.

“I was very surprised at their vision about immigrants, and about the Romanian culture transported to the United States. My vision changed too, and also the trajectory of the research I am conducting; it became something even deeper, something that has to do with memories, and with the recovery of traditions that have mutated.”

What surprised Loghin most was finding that the Romanian traditions were still very present and reinforced in that community. She attributes this to the size of the community.

“in New York it is easy to keep traditions, like food, for example, because they have shops where they can get many things that are found in Romania. Here in Juarez one cannot do that; one has to adapt to what we have,” she said. The latter being a recurrent topic in Loghin’s art. It is no surprise that self-portraits among her most popular works.

“I have studied many photographers who use the self-portrait to question themselves about their identities,” she explained. “I can relate to that; to that kind of questioned identity, where one cannot really see the line that divides one culture from the other.”

Among the photographers Loghin cites as inspiration are Graciela Iturbide, Cindy Sherman and Francesca Woodman, who inspired her self-portrait series Metaphors of a fragmented hybridization. Here, Loghin explores her own character by depicting herself in traditional costumes, both Romanian and Mexican, while placing herself in different forgotten spaces in Cd. Juarez, abandoned due to the drug war and the violence that struck the city a in recent years.

“I liked the abandoned aesthetics and the textures. I see them as a process of the organic memory; how time consumes these buildings, and the lives lived in there.” This, she said, reminds her of her own nostalgia for the homeland she once abandoned.

In her most recent project, Those who came from the East, however, Loghin decided to set aside the self-portrait technique in order to explore the identities of other European immigrants living on the border. By doing this, she continues to explore her own identity as she depicts the lives of other immigrants.

“I will continue looking for culture,” she said. “Even though I like controlling the scenery in the portraits, for me it is important that the subjects contribute to the portrait by deciding the place, their clothing. I want them to feel like themselves. “

Despite the growing recognition of her work, Loghin acknowledges that Cd. Juarez is still a city that needs to mature in terms of art and culture. She agrees, however, that during the past few years, Juarez has been taking some steps that, even if they are small, they are crucial for the reconciliation of the people of Juarez and the art.

“I would like to help in that aspect. I would like to contribute to the promotion of art in Juarez. I would like to see people have access to art, and for the museums to stop being dusty. Right now the few museums we have are like ghosts, and I think we as artists need to be involved, and to be allowed to open new spaces managed through our vision.”