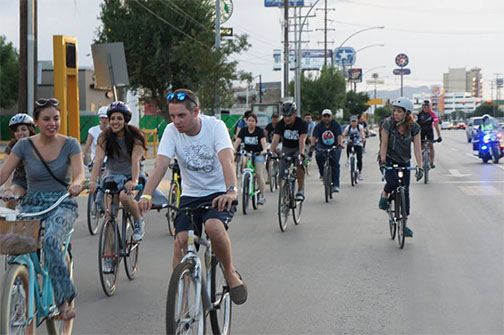 CD JUAREZ — Mixed cultures, two languages, and a diversity of ideas and traditions make the metroplex of El Paso and Ciudad Juarez unique, and La City Ride wants to show off the border blend of events and practices in its bi-national culture.

“La City Ride is an initiative born [in Juarez] as a result of Jovenes Emprendedores Sociales and graphic designers,” said Daniel Martinez, a promoter of La City Ride. “It has the intention to promote urban cycling and to generate a border identity through these Juarez/El Paso events.”

The border region’s rich mix of cultures, languages as well as isolation from major population centers in Mexico and Texas means that the border region often develops its own identity.

La City Ride is a recent movement in Ciudad Juarez that invites residents to get to know and experience the special qualities of their city, for example historic downtown buildings, local coffee shops, and often unnoticed murals and sculptures.

The organizers of La City Ride say they are creating biking events and cycling tours around different themes, like visiting coffee houses, to attract residents to join in to explore little known aspects of the city.

Martinez, 24, a graphic designer and community organization volunteer, said he and two other graphic designers developed the idea for the cycling initiative and brainstormed how to name it.

“After various proposals, we choose ‘La City RIde’ because it is a sentence formed by two languages: English and Spanish,” Martinez said.

As of September, the urban cycling initiative has organized two cycling tours in the city of Juarez.

The first community bike ride called Le Tour de Juanga, named after the famous cycling event of Le Tour de France, was held in May and attracted 200 cyclists from El Paso and Ciudad Juarez. The bikers rode 12 kilometers visiting the murals in the Melchor Ocampo colonia and the murals in the Plaza Cervantina, to finish with a visit to the Juan Gabriel mural.

“The theme was to promote urban art, to visit some of the murals that have been done around the city, and it concluded with the Juan Gabriel mural,” Martinez said referring to the 400 square meter mural located on Juarez Avenue.

Their second event, named “Hypecycle: La ruta del café,” consisted of a bike ride to local coffee shops offering coffee alternatives to those provided by chain stores, for example Affogato, coffee with ice cream, a Prensa Francesa, or French Press, as well as a Café Cortado estilo español, Spanish-style espresso with a drop of milk. The bike riders were offered complimentary coffee at the shops they visited.

“I think this is a very cool idea (La City Ride events) because there are a lot of cycling groups that get together to train, but this concept is different because it is a cycling ride,” said Juan Villegas, 27, an urban cyclist from Juarez. “This not only encourages the use of the bicycle but it also helps people to get to know places in the city that only a few know.”

In order to participate in a La City Ride event, attendees need to pay a modest fee in order to join the ride and be given memorabilia.

The organizers of La City Ride have generated posters, created Facebook events, and spread the word throughout social media websites, radio, and television. They also create merchandise of the events, promotions, and they make alliances with other organizations that are involved in the event themes.

Social media has been an important tool to get the word out about for La City Ride.

According to Martinez, La City Ride events have drawn dozens of El Paso participants thanks to social media.

La City Ride plans to hold a binational cycling ride next year that will involve a route through the two cities of Juarez and El Paso.

“Juarez/El Paso is seen by many as one city divided by a border,” Martinez said. “We want to promote the union among these two border communities.”

Initiatives like La City Ride promote the border culture that has been taking place in the cities of El Paso and Juarez throughout the years. Encouraging people to take a ride on their bicycles and get to know the hidden cultural treasures of the city are the main goals for this movement.

“What we promote is that people get to know their city and the things that are happening around it,” Martinez said.