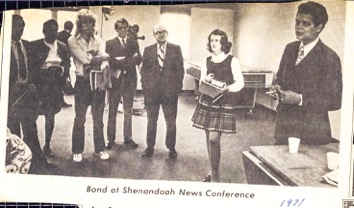 Julian Bond answered my question and then with a smile bestowed the supreme compliment on a rookie reporter — “You did your research,” he said.

That was 44 years ago and I was in my first year as a cub reporter at the Winchester Evening Star, a small afternoon newspaper that is still in business today in the Shenandoah Valley of Virginia. Bond, an African American leader going back to the early days of the civil rights movement who died Saturday at 75, had stopped on a lecture tour in this conservative bastion of Old Virginia where the ghost of Jim Crow was still flapping.

I was surprised to hear he would speak at the Shenandoah Conservatory of Music. I had arrived in this southern town just a few months before and felt I had dropped into a 1950’s time warp. The city was still largely racially segregated and I had been cutting my teeth covering high school basketball games, about which I knew very little. But coming from Washington, D.C., I did know something about the civil rights and anti-war movements that Bond had been involved in.  I was determined to meet him.

I am reprinting the original article I wrote all those years ago here along with a photo I took of Bond talking with college faculty. I find that that it rings true and timely still. One thing he said stuck with me all these years — “Malcolm X once said, that there were two ways to power, bullets and ballots,” and smiling again he said, “and since it’s highly unlikely that any of us will use bullets, that leaves us ballots.” Julian Bond will be missed.