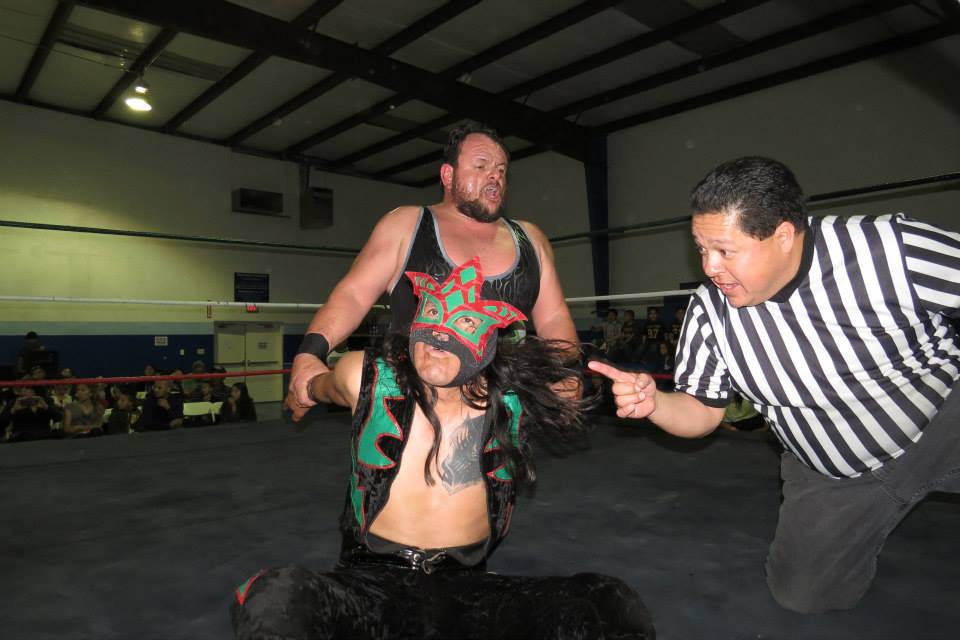 Hurricane Hector attempts to make his opponent give up.

EL PASO — Grabbing the wrestling ring ropes with both hands, in one swift move Eddie Guerrero landed on the top turnbuckle facing the ring and then launched off the turnbuckle into a backflip.

The jump he had learned from his legendary father Gory Guerrero was short, but in midair there was no turning back, no stopping the drill. In a split second his life was in serious danger, but then Hector Rincon, his training partner, stepped in catching Guerrero in mid-flight breaking his fall. The impact knocked Rincon out.

“When I came to,” Rincon says. “I was lying on the ring, Gory Guerreo, Eddie’s dad was trying to straighten my nose and Eddie was behind Gory snickering. They said my nose was completely underneath one of my eye sockets.”

For those familiar with professional wrestling Gory and Eddie Guerrero need no introduction, especially around these parts.

Before his untimely death, in November 2005 at the age of 38, Eddie was at the top of the wrestling world. Considered one of the best in the business, he showcased his abilities on a nightly basis on the biggest stages with a Lucha Libre style that he learned in El Paso and went all over the world to perfect, but which is not always embraced by World Wrestling Entertainment, the biggest wrestling organization in the world.

Eddie’s father, Gory, is a legend. He helped shape the craft of Lucha Libre like few in history have been able to do in any sport. Some of the holds wrestlers and luchadores use on a nightly basis are named after him — he invented them.

The Gory Special involves a wrestler putting his opponent on his back, arms interlocked and his hands pulling on the opponents face. Gory made many a wrestler give up. With “La de a Caballo” Gory put his man on the mat face down, sitting on his back, arms locked around his knees and ferociously, mercilessly pulling the head back.

In the late 1940’s Gory tag teamed with El Santo. There was no bigger figure in Mexico than El Santo and if he is the Michael Jordan of lucha libre, Gory is Magic Johnson. That is how important Gory Guerrero, who died in 1990, is in the world of Lucha Libre.

“To me, Gory was like Henry Ford was to the Auto Industry,” Rincon said. “He was a big pioneer of the world of professional wrestling.”

Rincon learned to wrestle, learning Lucha Libre, from Gory in a ring in the Guerrero’s backyard. Eddie and Hector trained side by side under the watchful eye of a legend.

“In Lucha Libre there’s a lot more, I don’t want to say gymnastics, but a lot more high-flying,” Hector said. “American (wrestling), was just punches, body slams and closelines. In Mexico it’s more what they call high spots and continuous wrestling, aerial maneuvers and what not.”

The El Paso/Juarez border is a place where these two styles clash and coexist more than anywhere else in the world. And there was a time, not too long ago, when the sport thrived and made the borderland a hotbed for both lucha libre and professional wrestling. It all revolved around Gory and his local company, which would encourage the interaction between both the Mexican and American styles.

During the1960’s and 1970’s, Gory used his connections and weight in the world of wrestling to not only bring wrestlers like Andre the Giant to the border, but also plenty of guys from Mexico.

“The people from Juarez and El Paso, they embraced Lucha Libre and loved it,” Rincon said. “I remember seeing one match in particular, which was a local heel by the name of Flama Roja, take on a national baby face El Villano. The place was standing room only, the electricity was everywhere. … I just kept on looking at the rafters it was unbelievable how many people were out there.”

Rincon grew up right in the middle of this wrestling golden age. He and Eddie Guerrero reached the epitome of this cultural clash every night they stepped into the ring.

A hero on the border

Eddie Guerrero didn’t stick around the border too long, hitting it big and working for the main promoters in Mexico and the United States. Rincon however stayed behind, never really being able to make up his mind about how big of a part lucha libre would play in his life.

He wrestled on both sides of the border, with different names and gimmicks. At first he was the good guy, the baby face.

He was given the name Hector Veloz, because of how quick he was in the ring for his big size. Although he found success on the good side, he quickly decided that hew would be the villain.

“A lot of the heels used to like to work against me,” Rincon said. “They said I had what they would call ‘un angel.’”

Rincon had that charisma that appealed to the crowd and made it easy to be cheered on. That in turn made it easy for the heel, the villain, the bad guy, to reach his goal of being hated. All Hector’s opponents had to do was hurt him. Win or lose Hector’s job was to be the one in pain and according to him it got old pretty quickly.

“After a while I got tired of taking all the beatings,” Hector said about his decision to trade cheers for the boos, permanently.

As a heel, he reinvented himself. He stopped being Hector Veloz and became Hurricane Hector, when he wrestled in El Paso. When he’d perform in Juarez he dawned a mask as part of a stable called Operation Destruction. Covered from mask to boots in camouflage and waving the American Flag all over the arena, he and his partners were despised by the Juarez crowds.

Today he is just Hurricane Hector. He comes out with a snarky look of superiority on his face and a can of aerosol to clear the air of the crowd’s bad smell. He talks down to them, makes them mad, but you will never hear Hurricane Hector cuss at his audience—he will never insult them.

“You don’t cuss at them,” he says. “That’s what they call cheap heat.”

Heat is the wrestling term for negative reaction a heel receives from the crowd when up on the ring—it’s what the bad guy lives of off, he feeds off the boos, the hate.

“Real heat, good heat is when you take down the good guy, the baby face and tear into them,” Hector says. “They (the crowd) hate you for what you are doing or what you are, but not because you cuss at them. That’s one thing Gory taught us, cheap heat don’t ever do it.”

The wrestler becomes the teacher

But Hurricane Hector’s frequency in the ring has gone down. Almost three decades of wrestling takes a toll on a person’s body no matter how many out there believe it to be fake. The sport, as Rincon defines it, demands a lot from the performer’s physically—it’s just not something anybody can do.

“Everybody that steps into the ring, it doesn’t matter if you’re a high flyer or not, you’re taking a big risk,” says Rincon. “You know that for a fact.”

His body is a testament to that, not only because of the broken nose Eddie gave him all those years ago, but because of all the injuries, like dislocated knees, that have hobbled him throughout the years.

He may not be performing every weekend like he used to, but that does not mean he is not in the ring. After years of practicing and perfecting his craft, Rincon turned to another one of his passions—teaching. He started training other wrestlers the art of lucha libre just like he learned it from Gory—on a ring in his backyard.

“I tell them, ‘look, its nothing fancy, there’s no gym, there’s no showers,’” Rincon says. “It’s the same way I was trained.”

Hector not only trains them, but looks to give those who want them opportunities to reach the next level. Traveling all over the country to provide exposure, from Austin, to Oklahoma to as far as the east coast. His pupils have been recognized by top scouts of top promotions like William Regal from the WWE.

Size and personal taste have prevented some of his trainees from really breaking through, but when it comes to wrestling, Rincon prepares them as well as anybody.

“Some of my guys actually went to some of their(WWE) camps,” Rincon said. “They had some really good feedback, but they told them ‘unfortunately your size is what’s keeping you (down).”

The training does not stop though and the passion for the craft does not diminish. You can see them and hear them from the street, running, tumbling, jumping, working on their craft. Enjoying their passion, but with the seriousness with which Hector was taught to approach his craft.

“I don’t feel like I’m better than them,” Rincon says of his students and younger wrestling colleagues. “I just feel very fortunate that I can share my experiences and my knowledge with them—and that they ask, it makes me feel good.”