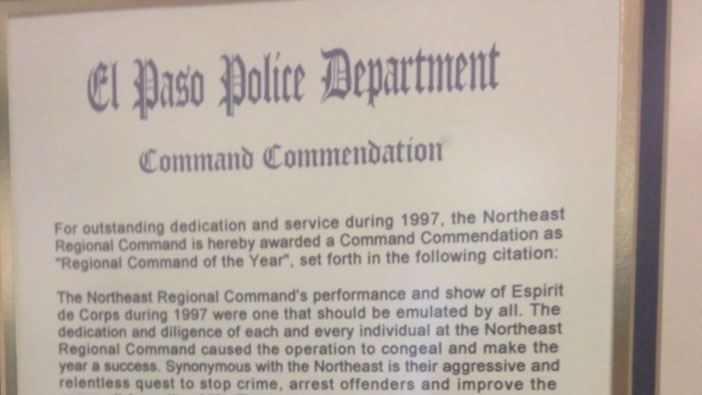 EL PASO — When Slade Davis started patrolling the Northeast El Paso neighborhood once known as the Devil’s Triangle 22 years ago, it was plagued by drug dealers, gang violence, prostitution and violent crimes.

The area was identified in the mid-1990s as a prime spot for community policing, a new law enforcement philosophy that emphasized a proactive approach to fighting crime based on community engagement and problem-solving techniques. Police area representatives, known as PAR officers, were trained to work with grassroots community groups to get to the root of problems in the neighborhood. Now the area bordered by the Patriot Freeway, Dyer, and Hondo Pass is known as the “Angel’s Triangle.” “With community policing we got the managers [of the apartments] involved, checking criminal histories, and working on the neighborhoods,” said Davis, now a community services officer in the Northeast Regional Command. “Once the community is involved we bring the Boy Scouts to paint over graffiti. The Triangle I’d say is about 80 percent better than it was.”

El Paso’s quiet streets have earned the city the reputation of being the safest large city in the U.S. According to city officials, the border city’s low rate of violent and property crime is largely due to community policing, a practice now employed by many cities across the country.

Community policing was helped by grants issued under the Violent Crime Control and Law Enforcement Act signed by President Bill Clinton in 1994. The purpose behind the bill was to help reduce crime, and minimize dangerous hot spots in the U.S. According to a 2009 El Paso Inc interview with then-El Paso Police Chief Richard Wiles, former Police Chief John Scagno developed the plan for decentralizing police services and creating regional commands throughout the city to bring police and citizens closer together.

“Before Scagno we were doing what was called traditional policing. The department would study crime trends and various issues and make decisions how to address them all without the involvement of the community. We were also highly centralized back then,” Wiles said.

El Paso County Commissioner and former El Paso Chief of Police Carlos Leon led efforts to implement the community policing initiative while working as a police captain under Scagno and later as a commander under Chief of Police Russ Leach.

Where there once was just the main police headquarters in El Paso, now there are five regional commands throughout the city.

Leon said the strategy helps residents take responsibility for the safety of their community.

Erik Segura, a crime prevention officer with the El Paso City Police Department for two years, says community policing means that there are more eyes on the streets to help police detect and prevent violent crimes.

“We need more residents to participate as witnesses. It helps for the actual community to give me feedback as far as what’s going on,” Segura said.