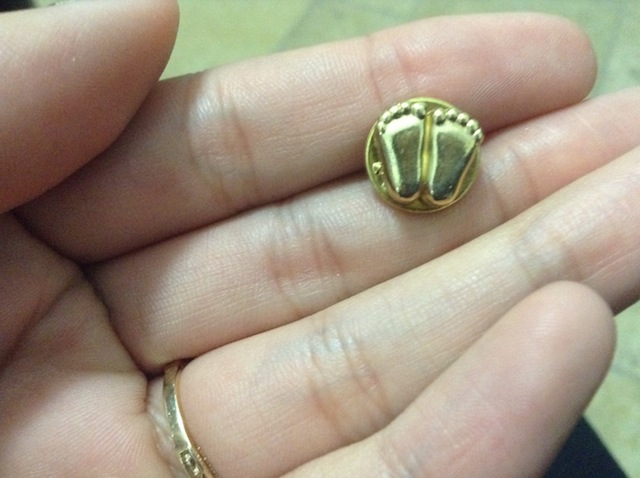 The two little feet sculpted in relief on the pin I wear, exactly the same size as the feet of a 10-week-old fetus, say it all. I have worn it proudly to work, to school and in public. The precious-feet pin represents the myriad life journeys that were left unfulfilled by those who never had a voice or a proper beginning.

The number is big — 55,772,015. Ever since the Roe vs. Wade Supreme Court decision more than 50 million abortions have taken place in America. As a result 1.2 million children have lost their lives each year.

“Abortion has taken a terrible toll on America. We’ve now lost more than 54 million of our sons, daughters, friends and neighbors and we are a much poorer nation for it,” said Dr. Randall O’Bannon, education director of the National Right to Life Committee.

The story behind abortions

Abortion is not at the forefront of the American problems because it is not considered a crime and it is legal in the United States. During the early twentieth century, Margaret Sanger opened the first Planned Parenthood and it operates over 820 clinics in the United States. The purpose of the organization is to aid women with healthcare services, offering birth control and assisting with unwanted pregnancies. With or without the consent of the American people, Planned Parenthood has a $1billion budget. Of that amount, $542 million has been received from American taxpayer money.

This means that people who are prolife have the unfortunate reality that $6.8 billion have been delivered to Planned Parenthood since 1964. Obamacare has been known to give more than $7 billion to abortion supporters.

The Planned Parenthood clinics, which are connected to the National Abortion Federation that speaks on behalf of 400 clinics that do abortions, have to practice in accordance with the law.

According to ACLG.ORG the organization committed illegal acts as shown in a Live Action video. Two of the abortion clinics in Arizona, Phoenix and Tucson, were performing illegal abortions, which according to the law were “class three felonies.”

Four states: Arizona, Illinois, Oklahoma, and Pennsylvania, make it illegal for a sex-selective abortion to happen, meaning a baby could be aborted just for being the wrong gender.

In particular Arizona law states that it is criminal to “solicit or accept monies to finance sex-selection or race-selection abortions.”

Regardless of this law in the four states, I find it that it comes down to same thing. Legal abortions are still illegal abortions, just with a different name. Abortion costs start at around $400 roughly. Money is still being given to those clinics with that baby already having a gender inside the womb. An abortion still robs the baby of his or her gender, and race. And yes the baby is robbed of unique DNA.

The dangers behind abortion

And 10 percent of women are affected by those risks according to abortionfacts.com. The most common problem is cervical damage causing serious life problems to a woman’s reproductive system.

What could happen next?

In January 26, 2015 the No Taxpayer Funding for Abortion and Abortion Insurance Full Disclosure Act of 2015 has been passed in the House of Representatives. To prolifers this is only the beginning. It would need to become a law so that taxpayer money would not reach abortion clinics.

Recently abortion rates have been on the fall at the lowest level since 1973, the Roe vs Wade decision according to the Guttmacher Institute. The other side of the spectrum indicates that birthrates fell to 9 percent due to birth control.

According to the Public Religion Research Institute, 54 percent of Latino millennials are against abortion in all or most cases. However they feel that birth control for the Latino community is something to be support.

These split decisions on abortions and birth control are currently an issue of controversy. It is uncertain how people might react to these statistics, and how they might act.

For my part I will continue to wear my pin. Embracing it and remembering the “young ones,” which is what the Latin word “fetus” means.