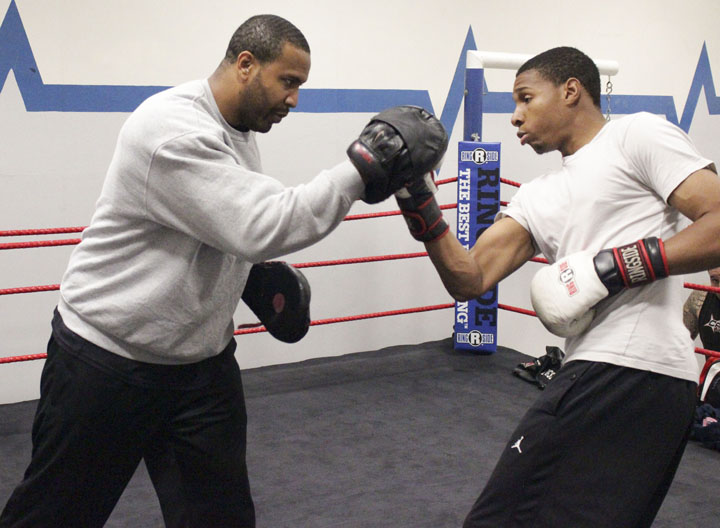 Terry Green, left, passes on his life lessons inside and outside the ring. Photo by Michael Farrar, Borderzine.com

EL PASO — If the school of hard knocks had a dean’s list honor roll, Terry Green would hold a spot at the top of that roster.

The 30 year-old boxing trainer and former Marine learned about loss at 14 when his mother died and he has been punched in the ring and shot at on the battlefield. Despite the hardships, he emerged as a leader, not only in the gym, but in his work in this border community and as president of the Black Student Union at the University of Texas at El Paso where he is working toward a degree in multidisciplinary studies.

As the son of a service member, relocating frequently was a way of life for Green.During the summers, his father, Terry Green Sr. , a boxer himself, began teaching his protege the fine points of the sweet science .

Learning about loss at an early age

When his mother died, life delivered a blow that would knock anyone off his feet. “My mom was the only person that really raised me, and trying to adjust to someone else’s household was rough,” Green said. “No one around me had ever experienced loss yet they constantly tried to tell me how to deal with loss.You don’t get over it.”

Fortunately there were some positive influences from persons in Green’s life who showed him real love and ways to deal with his tragedy. Curtis Williams a former principal at Andress High School was one of them.

“He showed me some tough love but it worked and I made it,” Green said.

Green made the choice to live a life that would make his mother proud. After graduating from Andress, he joined the U.S. Marine Corps.

It wasn’t long before Green again faced adversity. When Operation Iraqi Freedom got underway in 2004, his unit left Camp Pendleton, flying out of March Air Force Base and landing in Kuwait’s Ali Al Salem Air Base. It was there that Green found himself on the front lines, low crawling and dodging bullets.

“War is something hard to explain to people who have never been, no matter how many movies you’ve watched, you’re scared all the time but being brave through that fear is what defines you.”

Struck by gunfire on the right side of his kevlar helmet and once in his flak plate, his first thought was “Jesus I’m on my way,” but he survived and would soon open the door to a new part of his military career.

Stepping into the ring

Back at Camp Pendleton, Green tried out for the Marine boxing team, his opponent was the team super-heavyweight Juan Rivera.

“I gave him a good whooping and received orders to join the team, but my unit wouldn’t let me go.”

The following year he did it again only to experience the same result. Finally, “the All-Marine boxing coach came in, watched me box and I had orders the next week to Camp Lejeune.

During his tenure on the team, he faced the likes of Brandon Gonzalez a member of Andre Ward’s camp, Thomas Riley out of Miami and William Rosinsky once an opponent of middle-weight champion Kelly Pavlik.

Green amassed a good 70-plus fights throughout his time with the Marine team before eventually turning pro. However, he found that pro boxing was not for him.

“The pay is terrible and there are much better ways to make a living.”

Green and his family eventually settled in Chaparral, New Mexico, outside of El Paso. There, life was comfortable, calm, and peaceful. Then adversity struck again when the place the Green family called home burned down. .

“Everything I ever owned, pictures of my mom, baby books, clothes, toys, trophies all gone,” he said.

Thankfully, old high school friends, teammates and coaches, helped them get through with whatever support they could provide.

“All my memories have to be stored in my head now.”

Using experience to help others

“Even as a fighter, I would teach others to fight; I’ve always been a leader.I was the guy that bullied the bully,” Green says. “I wanted to take what I knew and apply it to helping other people achieve their goals.”

Frances Beniquez, an up-and-coming fighter from Puerto Rico, has relocated to train here in El Paso, and Joshua Camacho winner of the Most Outstanding boxer award at the 2015 El Paso Golden Gloves tournament are a couple of notable fighters Green is training.

Beniquez says, “I’ve been training with him for the last eight months because he’s a great technician, and as a Puerto Rican boxer I have to have great technique.”

Beniquez feels Green is a very humble guy and is always looking to do what’s best for his fighters.

To the newcomers looking to make a splash, Beniquez says, “you need to be positive first, then be assertive; boxing is a lifestyle you’re either all in or not in at all.”

Camacho, 26, has wanted to box since he was a young kid and recalls seeing the guys out running and throwing punches as he and his family would drive past the park.

“When I first started here, Terry tested me to gauge my natural ability; he encouraged me to keep going because I was a natural at the sport.”

The combination of good teachings and natural ability proved to be unbeatable at the 2015 El Paso Regional Golden Gloves Tournament.

Camacho won a victory over every opponent he faced, winning the most outstanding boxer award in the process.

“I just kept listening to my corner. Terry always says ‘listen to me, I know what I’m seeing, do as I say’ and that’s just what I did, and I came out victorious.”

“Fidel is 19-3 now, never lost with me in his corner, but he’s got a nice team around him,” Green said. He does not own a gym, but where there’s a will, there’s a way, he says. Tobin Park located on Railroad in northeast El Paso houses a two-room boxing area.

In one room there is a ring, a few heavy bags and an uppercut bag. The other one contains speed bags and space to improve footwork. It is here that Terry mentors, motivates and trains the local youths as well as anyone who wants to learn and those who aspire to become professional boxers.

USA Boxing welcomes anyone from 8 to 40 years old. “The facilities are nice and are improving. We have a new ring canvas, new ring ropes, and punching bags,” Green said. “It’s nice, the city has shown a lot of support there and we are greatful.”

When he is not involved in the many facets of boxing,Green attends classes at UT El Paso. He’s a multidisciplinary major, and is currently the president of the Black Student Union (BSU).

“As president of the BSU I’ve learned how much work still needs to be done in the El Paso community.”

As UTEP strives to be a Tier One institution, Green feels the university is lacking diversity. He works diligently toward improving that diversity as time goes on.

Dr. Maceo Dailey, director of African American Studies at UTEP said “Terry has great leadership skills, which led to him being elected. He articulates issues with great clarity and has become a role model.”

During his tenure as the BSU president Green has developed a great student appreciation for his sincerity, said Dailey.

“There is a lot of work involved with planning, scheduling and dealing with constituents. Terry has set the bar high for whomever his successor may be.”