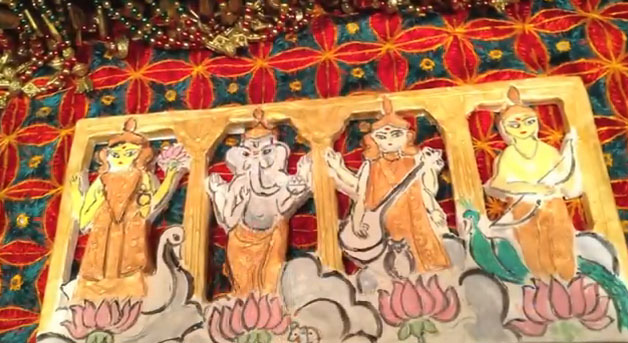 “The museum is trying to show that the border region is not just Hispanic or Anglo, but in fact the borderland is made up of a lot of different cultures,” Event Coordinator Asha Shetty said. Shetty was born in the South Indian city of Karnataka.

The exhibit recognized Indian culture through dance portrayals, art and a little taste of food. Many in attendance were local Indian families celebrating their culture and dressed in traditional Indian attire decorated with beads and sequins of many colors. Indian history was also noticeable through the many artworks on display and regional dances.

Shetty said the paintings, sculptures, fabrics and other items on display belong to borderland Indian families who provided them for the event. The items were arranged around a Rangoli on the floor. A Rangoli is a traditional circular decoration in Indian homes to welcome guests during religious functions. A rangoli decorates the floor of the El Paso History Museum for the Indian Culture Day celebration.

The folk art Rangoli circle was painted on the museum floor in patterns of red, yellow, blue and white with a gold pole in the center. The Rangoli was protected by retractable theater barriers wrapped in tinsel.

The afternoon kicked off with a young Indian man singing the Star Spangled Banner, followed by a middle school student playing the Indian National Anthem on the violin.

The dance portion of the program consisted of nine performances from different regions of India, a vast diverse country with 1652 recognized languages.

The exhibit showcased a dance called Kathak, which focuses on foot work, and also Bharatanatyam, which is a combination of gesture and footwork. “Two regions of India were portrayed,” UTEP Associate Professor and Assistant Chairman from the Department of Chemistry Mahesh Narayan said. “One is South India, Bharatanatyam, and the Kathak performance is North India.”

The performers ranged in age from preschoolers to adults and dressed according to the particular region they represented. The barefoot dancers wore long pants with bells at the hem near their feet to produce sound as they moved.

“It’s a wonderful experience seeing all the dances—the artwork being displayed here,” said Miguel Sifuentes, a museum visitor. “It brings memories back to me because, back in 1975, I went to India as an exchange student for the American Field Service. To see this event here in El Paso in the Museum of History is great.”

During an intermission, members of the public strolled among the art work, statues and fabric displays.

“It was refreshing to see what I’ve grown up with,” said Narayan, who was born in Mumbai, India.

Shetty said the purpose behind the exhibit and dancing was to show the Indian contribution to the El Paso area. The idea for the event came from an initiative spearheaded by local Indians of various backgrounds.

“We picked a day,” said Shetty who was born in India. “We actually went to the City Council and they proclaimed March 21, 2015 as the day for celebrating Indian culture.”

The Indian community plans another exhibit at the same time next year.