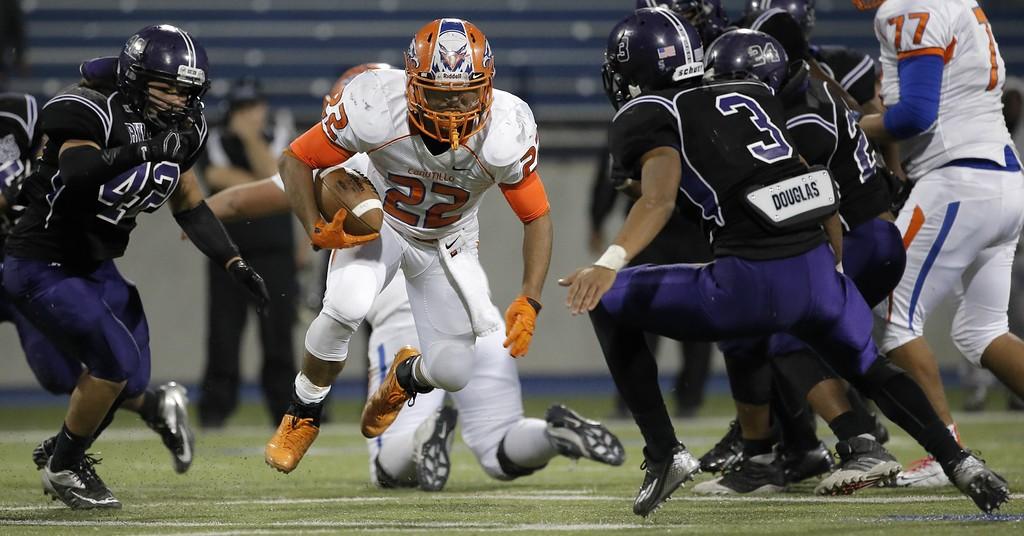 EL PASO — The Canutillo High School Eagles soared their way to a regular season record of 12-1 in the 2014 football season, cruising within one game of the Texas state championship final before falling to the Ennis Lions.

With a roster of 50-plus athletes, the majority of them being seniors, only five of them will be continuing on to play at the college level.

Friday night football is huge here, yet out of the hundreds of players in the 2014 season, just 21 athletes in El Paso area schools were recruited to college teams on National Signing Day, according to Channel 9, KTSM. Of the 21 El Paso commitments, 10 of them will be playing Division I football. He will graduate in May 2015, but is unsure of his college and football future. As an all-district 1-5A selection, El Paso defensive MVP and El Paso Time’s player of the year, he has somehow not garnered enough attention or exposure to play college football.

“I requested the help of TJ Sports because no schools were contacting me,” Velasco said.

High school sports programs in El Paso, anchored in the extreme southwest corner of Texas, have always been a distant glimmer to the rest of the state according to Ruben Muñiz, founder of TJ Sports Consultants.

“We are so far from everything — and sometimes we are even considered part of Mexico — that college budgets don’t allow them (recruiters) to come all the way down here to just look at one or two kids,” he said.

The Socorro Bulldogs baseball team won the state championship in 2009, but as soon as the fire of that dramatic season fizzled, El Paso high school sports once again became a lowly afterthought.

During the 2013-14 basketball season, the Andress Eagles boys basketball team ranked in the top five of the state. The Eagles went 31-3 overall, but ultimately fell in the regional final game. Had they won, they would have earned a spot in the state championship game.

Giving proper exposure and projecting the success of El Paso sports programs beyond the Chihuahuan desert has been Muñiz’ long-standing goal.

National signing day has come and gone and Velasco still waits hoping for an opportunity to receive a college education and continue playing the sport he loves, through the assistance of TJ Sports he and three other teammates along with local Andress quarterback Troy Klimansky have a visit scheduled with Sul Ross State University.

“I knew it was really late in the recruiting process, but I see Mr. Muniz at my school all the time and am familiar with what he does so I just hoped they would be able to help me.”

Former UTEP football player and newly appointed Pebble Hills high school defensive coordinator Austin Contreras said “a lot of kids don’t understand the process required of how to contact coaches, what to say, and even how to put a highlight tape together.”

In the old days before Youtube and HUDL, it was easy for coaches to fall behind in helping their players get recruited. With the development of these new tools “it’s good to have a company that knows how to utilize them and promoting young athletes in a positive manner.”

Now more student athletes can get the exposure and credit that they deserve. “Having someone local to say we’re here to help you, we want you to be seen makes all the difference”, says Contreras.

El Paso is beginning to see a change in size and talent, which is helping to overcome the stereotype that El Paso is not as competent as the rest of Texas. Contreras says, “Our teams are putting in the hard work on and off the field, going deeper into the playoffs and producing well.”