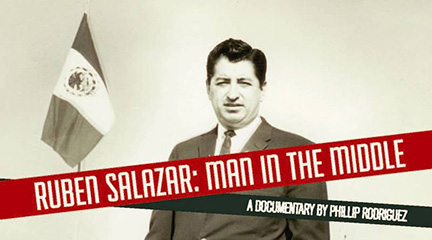 California State University, Los Angeles, celebrated the 87th birthday of the late Mexican-American journalist Rubén Salazar with the inauguration of an exhibit entitled “Legacy of Rubén Salazar: A Man of His Words, a Man of His Time” that will be on display at the University’s John F. Kennedy Memorial Library until March 26.

Salazar was a Mexican-American journalist who was struck and killed by a tear gas canister fired by a Los Angeles Sheriff’s Department deputy during the National Chicano Moratorium March on August 29, 1970. He was 42.

“Rubén Salazar was with our people by reporting accurately, fairly and perceptively about our people when he was working as a reporter. Today Latinos become larger in numbers, but not necessarily better understood by the media or our society,” said Dr. Felix Gutierrez noted Chicano and Mexican-American history and journalism scholar.

Salazar was born in Ciudad Juárez, Chihuahua, Mexico, lived in El Paso, Texas, where he attended The University of Texas at El Paso (then Texas Western), and later worked as a reporter for the Los Angeles Times and KMEX-DT.

The Rubén Salazar’s Birthday Celebration included a screening of the recently aired documentary Rubén Salazar: Man in the Middle, directed by Phillip Rodriguez, and a tribute to Salazar’s accomplishments accompanied by music and refreshments. The celebration was hosted by the The Chican@ Latin@ University Association (CLUA), Cal State University, Los Angeles and the Cal State University, Los Angeles Student Union.

A small committee of CLUA faculty, staff, students, alumni and community members, according to Muñoz, organized the current exhibit. Garcia and Gutierrez also contributed and brought together relevant material.

The exhibit counts with photos taken from the USC Salazar collection (http://rubensalazarproject.com/) , UCLA’s LA Times photo collection, and photos from Muñoz’s personal collection.  Three notebooks with copies of more than 50 articles and documents of Salazar’s are on display for visitor to leaf. Within the articles written by Salazar are his published stories that ran at The University of Texas at El Paso (then Texas Western) student-led newspaper, The Prospector.

A 1970’s interview with Salazar and other documentaries are also playing at the exhibit.

“The two of us (Leadsma and Muñoz) were very active in the student movements in the late sixties into the seventies.  Rita participated in the 1968 high school walkouts and in the college student movement afterwards.  I was leader spokesperson of the Chicano Moratorium anti war efforts and dealt with Salazar on the issue including at the demonstration where he was killed after it was broken up,” said Muñoz about his personal experience during this time.

As for the legacy Salazar left for diversity in the modern newsroom, Gutierrez said, “Latino journalists today should take the same risks (as Rubén Salazar) and develop their potentials wherever they see the best opportunities to develop their talents to report. Today there are many potential Rubén Salazars in the media and each one is a role model to others.”
Muñoz described the exhibit’s ten different display modules, each with a particular theme:

Cabinet 2: His work at Texas Western and The El Paso Herald Post.

Cabinet 3: His move from Texas to California and start at the LA Times.

Cabinet 4: His foreign correspondent work in Vietnam and Mexico City.

Cabinet 5: His developments on the Movement when he was abroad.

Cabinet 6: His work returning to LA covering the Movements.

Cabinet 8: The police breaking up of the rally and Salazar’s death.

Cabinet 9: The aftermath of the Moratorium.