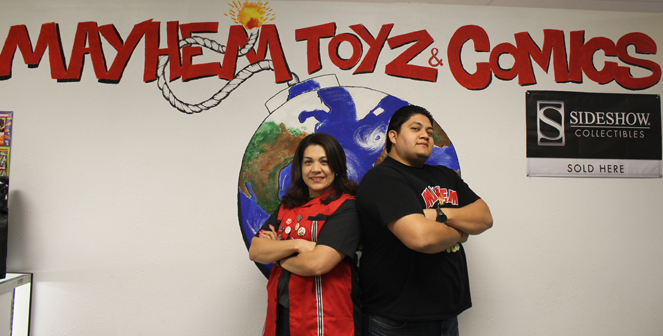 EL PASO – Like many children, Yvette and David Lomeli were obsessed with toys and comic books as children. But instead of putting childhood things aside as they grew, this brother and sister duo built their passion for collecting into a successful home-based business that led to their opening of Mayhem Toyz and Comics store in the spring of 2014.

Walking into Mayhem is like walking into a child’s dream bedroom. Tucked into a shopping center across from Hanks High School, Mayhem Toyz and Comics, 2200 N. Lee Trevino, Suite B3b, has rows of shel packed with comics and collectibles ranging from trending Breaking Bad and Sons of Anarchy figures to classic movie monsters like Frankenstein and Dracula. The store is brightly lit and has three couches where customers can read or even watch a movie while waiting for friends to finish shopping.

Customers entering the store are warmly greeted by David, Yvette or their employee Nathan, who are open to questions about the merchandise or even just casual conversations and updates on favorite super heroes.

“We try to make it inviting to everybody. And along with that we try to be as knowledgeable as possible and sometimes we even learn and pick up things from our customers,” David Lomeli said. “It’s a real sense of community sometimes.”

Unlike large chain toy stores that only carry products that are purchased in bulk, Mayhem also offers items that are very unique or limited edition. David Lomeli said that some of the specialty items available at Mayhem are “one of 1,500 or even 1 of 200 in the universe.”

Because of their experience as collectors, the Mayhem team puts in extra effort to stock specialty toys and exclusives. Last year the team attended the San Diego Comic-con, where they spent four days visiting all the major toy distribution booths that offer exclusive toys not found anywhere else in stores or online.

“Comic Con was rough. It was work,” David Lomeli said. “People say, ‘Oh, you went to Comic Con. You’re lucky.’ I’m like no. No it’s not. I go to work. We are there for our customers, standing in lines for hours-upon-hours waiting to get these things that someone at home can’t get their hands on, and to be able to offer them to collectors in our hometown.”

With great dedication, sacrifice is expected, and the owners of Mayhem Toyz and Comics have had their fair share of obstacles. Owner Yevette Lomeli recalls hours of work and long nights without sleep just to get the business off the ground. Everything from financials to certifications and distribution to licensing were early challenges in starting their business.

“If you don’t own your own business, you really don’t understand what work really goes into owning your own business,” Yvette Lomeli said. “There were endless hours, working weekends, and working nights, but I knew the temporary sacrifice was going to be worth it.”

David Lomeli agrees the long days were worth it to make their childhood dream a reality at a time when interest in comics and collectibles seems to be on the rise. And, while both siblings agree that it took a lot of effort to create Mayhem Toyz and Comics, it’s not the final frontier for them.

“We want to expand,” David Lomeli said. “My goal is to double in size. As well as get gaming involved because gaming is also a big piece of this too.”