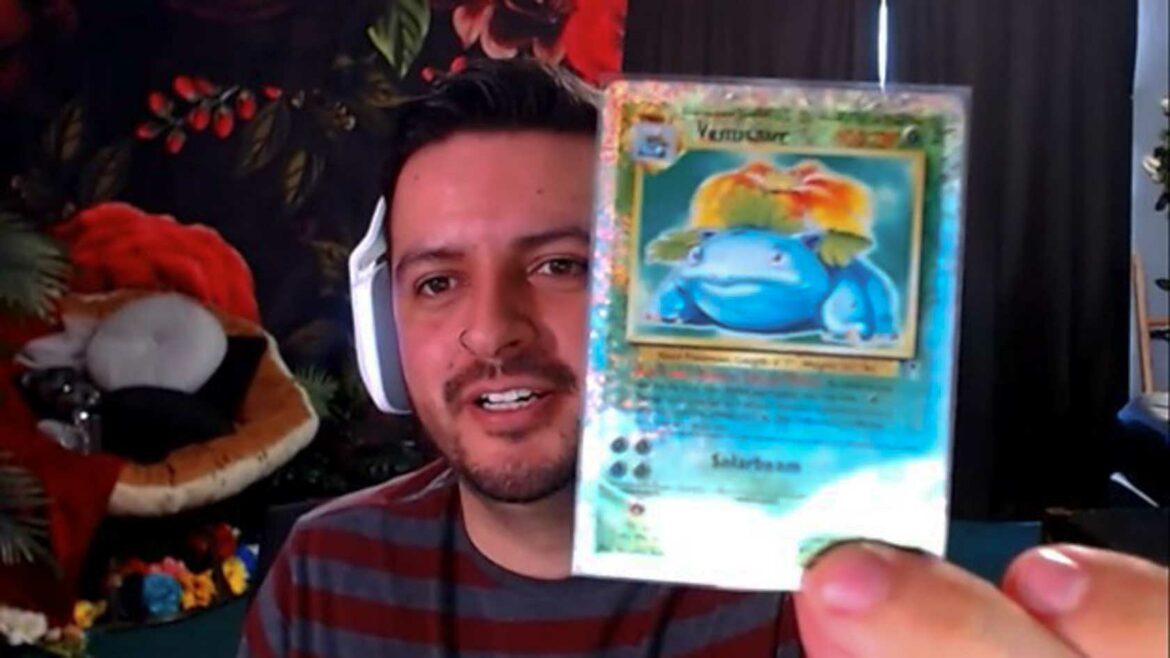 Collector David Flores holds up one of his Pokémon cards during a recent interview. Photo credit: Oscar Gonzales

EL PASO, Texas – Local trading card stores have seen a spike in demand for cards that were popular in the late 1990s and early 2000s as videos of online content creators buying Pokémon cards during the COVID-19 pandemic have caused many collectors to go on a spending frenzy.

“It’s a perfect storm of everything – it’s the pandemic, the stimulus checks – it’s everyone trying to find that happy place that made them happy during these really messed up times,” said Joshua Rooslet manager of Game Vault of El Paso. 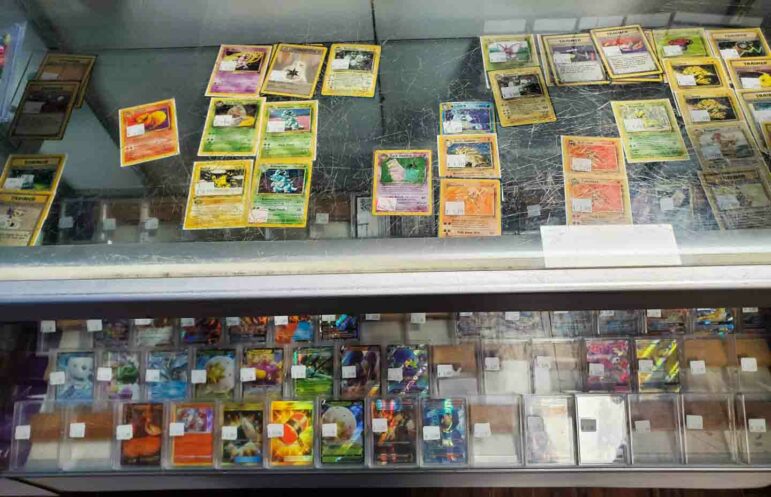 These are the few Pokémon cards left recently in a display at Game Vault of El Paso. The cards are in increasing demand because of the pandemic, among other reasons. Photo by Oscar Gonzalez, Borderzine.com.

Pokémon launched in 1996 as a video game that features catching and training animal-like creatures. The franchise expanded to a variety of media platforms, including a TV show and trading cards.The number of creatures in the Pokémon universe now is about 900 from its original 151.

It is now one one highest-grossing media franchise surpassing other franchises like Hello Kitty, Winnie the Pooh, Mickey Mouse & Friends and Star Wars.

Stores have had to implement rules for these high-demand cards and promotions.

“We try our best to get as much product to everyone,” Rooslet said. As recently as February 2020, patrons could “walk at any given time and buy booster packs, booster box – buy pretty much whatever they wanted” because demand wasn’t as high as it is today.

“Fast forward to today, we can’t keep any Pokémon products in stock is nearly impossible, we had to put a limit of 1 per family and even then we sold out,” Rooslet said.

Derek Lion, Sun City Games manager, said the demand is higher than the supply, and he wants “to get some Pokémon products because of how much the prices have gone up.”

“Some of the stuff we can still get is overpriced and we don’t see ourselves selling it locally so we just don’t order it, we might get a bad rep for it, but we do it for the people who can afford it,” Lion said.

David Flores, 31 and a local Pokémon card collector, is a co-administrator for a Facebook group called Pokémon TCG – El Paso. The group has more than 1,000 members who are free to trade, sell, or show their collections to other members.

He has felt the impact of the sudden rise of popularity of the cards in the form of scalpers who gather certain in-demand products to resell at a higher price.

Some patrons will camp out at a store to be there as cards are restocked with the hope that they will be able to purchase a “hot set [box] . . . They sell that box for $50 and they resell it for about $150 so they buy all the boxes they can whatever is put out there,” Flores said. 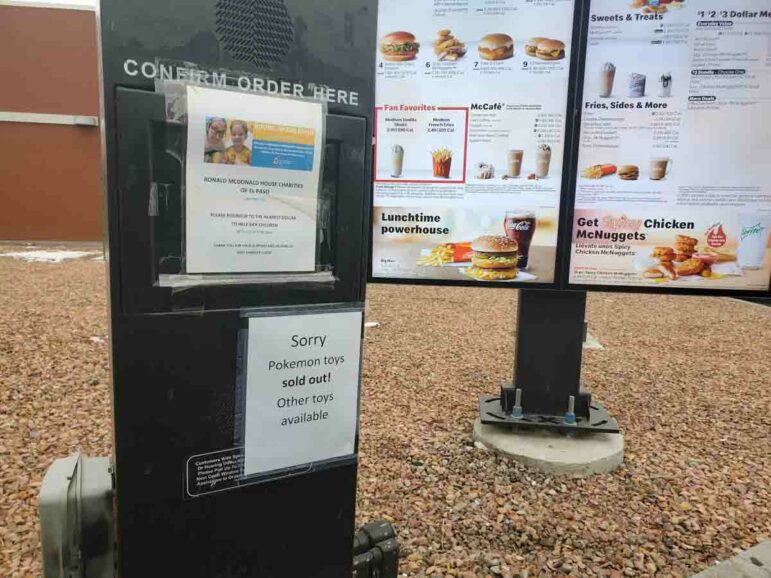 McDonald’s restaurants have had to implement restrictions on its Pokémon promotion because of high demand. Photo by Oscar Gonzalez, Borderzine.com. Photo credit: Oscar Gonzales

Pokémon is celebrating its 25th anniversary this year and has promotional packs with McDonald’s. The restaurant chain is dealing with its own high demand as some of its packs have been found on eBay going for more than $1,000. McDonald’s has sent a statement, calling for restaurants to limit supply.

“We’re working quickly to address shortages and also strongly encouraging restaurants to set a reasonable limit on Happy Meals sold per customer. We want to offer the full Happy Meal experience to as many families as possible, and help ensure everyone is able to get in on the fun!,” the statement said.

Some counterfeit or replica cards have appeared on retail sites.

“For experienced collectors, it’s typically pretty easy for us to tell (a product) is counterfeit,” Flores said. “We have the experience to know what is real, but for new collectors, that’s a good way for them to lose out money if they don’t know what they’re looking for. If they are not familiar if they haven’t purchased enough actual cards yet and they are barely starting and it happens to be fake cards they wouldn’t be able to know the difference it’s kind of hard unless you have someone who is experienced to like go with you for that purchase but you’re typically aren’t buying anything too crazy when you first start.”

TCG Player is an online website that helps collectors and sellers estimate a market price for packs and individual cards, some of the cards can go from up to $2,400 and as low as 18 cents.

Rooslet referred to the Pokémon frenzy as a bubble. “That bubble might pop,” he said.

As pandemic cases drop, interest in Pokémon might drop as well. “That just means people are going to have less money for Pokémon.

“That sense of excitement that people are going to get is what is going to crash the (card) market,” Rooslet said.

Oscar Gonzalez double majored in Multimedia Journalism and Digital Media Production at UT El Paso. He served on the Spring 2021 staff of Borderzine.