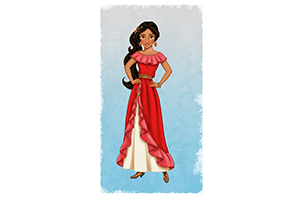 Disney plans to introduce Princess Elena of Avalor, “a confident and compassionate teenager in an enchanted fairytale kingdom inspired by diverse Latin cultures and folklore,” for a new animated TV series to launch in 2016.  The Hispanic character will first appear in an episode of Disney Junior’s hit series “Sofia the First” before spinning off into the new series “Elena of Avalor.”

“What excites us most is the chance to use distinctive animation and visual design to tell wonderful stories influenced by culture and traditions that are familiar to the worldwide population of Hispanic and Latino families and reflect the interests and aspirations of all children as told through a classic fairy tale,” Kanter said.

The series will be presented in 25 languages on Disney Junior channels and daily programming blocks for kids age 2-7 on Disney Channels, among other platforms, in 154 countries around the world.