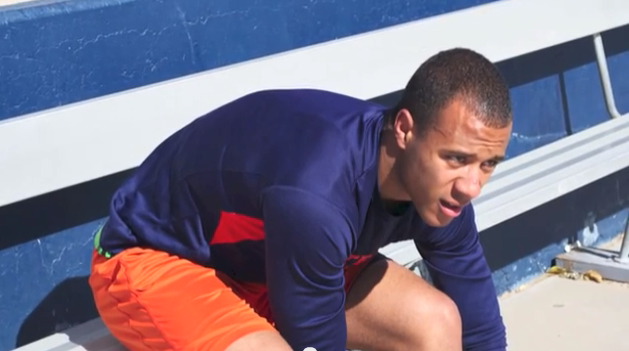 Despite economic challeng, Anthony Wright, 24, is focused on his dream to run in the 2016 Olympics. Photo by Helen Yip, Borderzine.

EL PASO — Anthony Wright came to a crossroads early in life – follow a life of drugs and crime like other kids in his neighborhood, or follow his dream of being a world-class track star.

Now, a few months after graduating from the University of Texas at El Paso in May 2104, Wright, 24, is about to do something only a select few dream of doing. A dual citizen of Germany and the United States, he is training to secure a spot on a team to compete in the 2016 Rio Summer Olympics in Brazil. Despite economic challenges, Anthony Wright, 24, is focused on his dream to run in the 2016 Olympics. Photo by Helen Yip, Borderzine.

“I’ve always been drawn to sports, soccer, basketball, and I always gathered around the groups that always isolated themselves with sports,” Wright said. “I am good at it and I think it’s amazing the ability the human body has and what it can do.”

The 5’9, 190 pound athlete with dark brown hair and eyes peppers his conversations with German phrases like Guten morgen (Good morning), and Wie geht es ihnen? (How are you doing?). He smiles often when talking with others, but on the runner’s track his chiseled features take on a look of fierce determination.

At the UTEP Invitational meet in April 2011, Wright glided with ease in the 4×100 relay as he received the baton and accelerated. He flew effortlessly past two other runners and took the lead.

Wright, the youngest of three siblings, was born in Germersheim, Germany. His father, Cardale Wright, was stationed at a U.S. Army Post in Germersheim when he met and married Wright’s mother, Ingrid. A year after Anthony Wright was born, his family moved to Lakewood, Washington. He attended Lakes High School, where he excelled in football, but later switched to track.

Wright was raised in the tradition of the church, and would attend weekly. But as he got older, life started to present him with temptations to fall away from his upbringing and his dream.

“Drugs were so close to my home, my brother was in gangs and went to prison for two years,” said Wright. “I could have easily gone to prison.”

Wright said he did start to follow in his brothers footsteps and started to experiment with marijuana. But his dream was not something he was willing to let go of without a fight.

“Having a goal in life, something that I wanted to be,” Anthony said, is what made him stop going down the wrong path.

He was recruited to UTEP on a track scholarship in 2010. Now, Wright says he has a strong relationship with God and owes everything he has to God.

“I started committing my life to Christ in 2011 when I got here,” Wright said. “God has given me a gift but it’s up to me to multiply it.”

Leon Settle, an assistant track coach at UTEP who helped recruit Wright, has his own experience as a star athlete. He set records as a student at the University of Arkansas at Little Rock, including the indoor 400-meter, 4×100 meter relay and 4×400 meter relay in 1998 and 2000. He was an All-American in the 200 meters conference meet and was also named the Men’s Sun Belt Outstanding Performer and received the Men’s Sun Belt Top Score, both in 1998.

He sees a strong potential in Wright’s determination and solid character.

“He is a hard worker, is always there when you needed him, and is an individual that shows a lot of leadership,” said Settle.

Wright took home a gold medal in an Indoor 2012 Conference USA Championship in the 60-meter dash, clocking in a season-best of 6.74. In the Outdoor Competition, Wright also earned gold at the 100-meter with a time of 10.51.

Wright’s performance in the NCAA Division I West Regionals in Austin in May 2012 raised the possibility of his going to the Rio 2016 Olympics.

He considered going to Germany to train, but it would have been too expensive and he didn’t feel he was ready at that time.

“I am a much more mature sprinter now which will help my success in an international competition.”

Coach Settle is confident of Wright’s chances of winning a spot on Germany’s Olympic track team.

“With his personal-best running time he should be top-ten in that country and be able to make the Olympic team for them whether in the individual or relay,” Settel said.

Wright said he is intent on training so he will be in top form when he goes to Europe to compete for a spot on either the German or U.S. Olympic track team.

“I don’t want to waste time when I go. Every season is a new season,” Wright said. “It doesn’t matter what you did last season. This season I want to be in the top.”

Wright plans to leave in the late 2015 to Mannheim, Germany. He will train and compete at a track and field club facility called MTG-Stadion. Wright will be competing for his shot to get sponsors for Rio 2016.

“There are different sponsors with different contracts, benefits, and requirements, but overall I need money,” Wright said.

Once Wright has his sponsors he will need to run the standard time in Germany to win the 2015 World Championship to make his dream come true. Each step takes him closer to Rio 2016.

“I’m excited to see the future and what the Lord has for me,” he said.