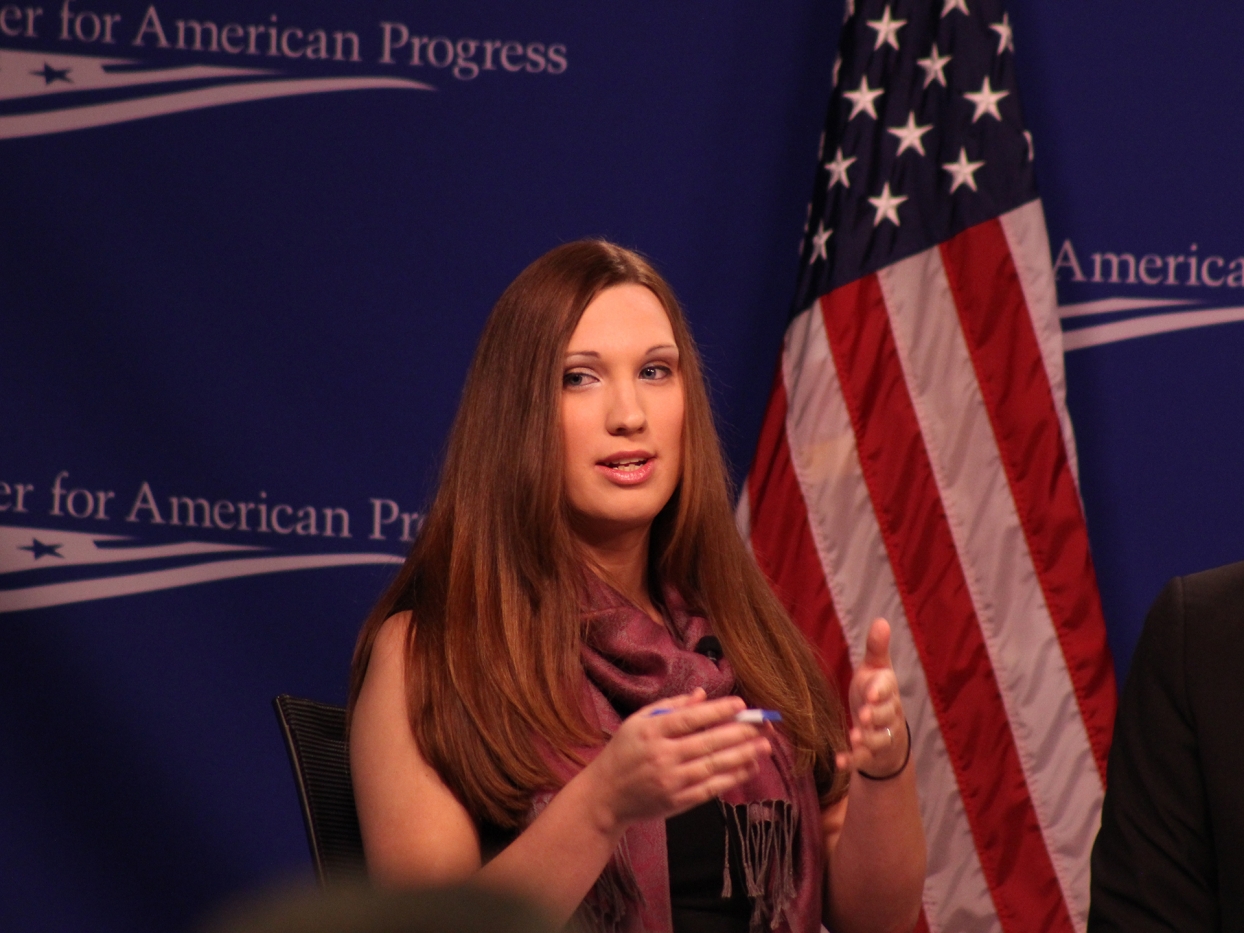 The Center for American Progress’ Sarah McBride is the lead author of the group’s new report about discrimination against LGBT people. The report gives statistics and anecdotes about discrimination in employment, housing and in public accommodations. SHFWire photo by Wesley Juhl

WASHINGTON – A new report by the Center for American Progress prompted renewed calls for legislation to protect the LGBT community from discrimination. Rep. Mark Takano, D-Calif., joins Pastor Delman Coates on Wednesday, Dec. 10, 2014, at the launch of the Center for American Progress’ report about LGBT discrimination. Takano and others called for new federal legislation with comprehensive protections for LGBT people. SHFWire photo by Wesley Juhl

Sen. Jeff Merkley, D-Ore., the lead sponsor of the Employment Non-Discrimination Act in the Senate, spoke Dec. 10 at the progressive think tank’s headquarters about the importance of such legislation.

Sarah McBride, the lead author of the CAP report, said that progress made by the LGBT community in the last 10 years highlights the issues it still faces.

“A lot of Americans think that LGBT discrimination is a relic of the past,” she said. “With this report, one of the things we wanted to demonstrate to folks is that this discrimination is real. It’s pervasive, it’s in every area of life and it has serious consequences for LGBT people and their family.”

The report gives examples of the types of discrimination that lesbian, gay, bisexual and transgender people face.

“These are millions of Americans that in activities that are necessary to live and thrive are being treated unfairly and being treated unequally,” she said. “The reality is that workplace protections only go so far.”

Merkley said he will introduce legislation next year aimed at protecting LGBT communities from discrimination across the board.

It’s not enough, he said, to protect LGBT from discrimination at work. They also need to be protected in housing, finance and public accommodations.

Many states still without non-discrimination protection

She said that people in 29 states can still be fired for their sexual orientation. In 14 state, gays and lesbians can be legally married in the morning and legally fired from their jobs for it in the afternoon.

The Employment Non-Discrimination Act, or ENDA, passed in the Democratic-led Senate in November 2013 on a 64-32 vote. The bill died when it was not brought up for a vote in the House.

“Isn’t it time to pass a broad non-discrimination act, an equality act of 2015?” Merkley said. “I absolutely intend to introduce such an act.”

Merkley said another option might be to amend existing laws, such as the Civil Rights Act of 1964.

Rep. Mark Takano, D-Calif., said he is less optimistic about the chances of passing such legislation in the next Congress, in which Republicans have the majorities in both houses.

“I think in the short term, procedurally, in either house of Congress, I think our chances are probably zero,” he said.

There are people at the highest level who don’t see a need for ENDA, he said, let alone a more comprehensive measure.

Another problem will be the role of religious exemptions in LGBT laws.

Some religious groups say that any form of ENDA that doesn’t grant broad exemptions would be tantamount to restricting religious freedom.

National and state LGBT groups were divided by ENDA’s broad religious exemptions. Many groups thought that allowing businesses to turn away LGBT people in the name of religion could be a license to discriminate. The Center for American Progress’ Sarah McBride is the lead author of the group’s new report about discrimination against LGBT people. The report gives statistics and anecdotes about discrimination in employment, housing and in public accommodations. SHFWire photo by Wesley Juhl

McBride said that, while people of faith may not always support same-sex marriage, she has seen many religious groups support legal protections for LGBT people at work and in the public square.

But Takano said getting a version of ENDA that the LGBT community is comfortable with “post-Hobby Lobby” will be difficult, because exemptions are key for most Republicans.

The 5-4 Supreme Court ruling in Burwell v. Hobby Lobby Stores expanded religious rights of some private companies, allowing them to refuse to offer health coverage that includes birth control because.

“If we create substandard protections for ourselves that provide broader exemptions, that clearly treat LGBT discrimination differently from race discrimination, it provides for the court a rationale to expand those exemptions in the way that they did in Hobby Lobby,” McBride said.

Merkley said he is still optimistic, although he knows he has his work cut out for him.

“I guess sometimes hope and confidence are a little bit blurred together,” he said.