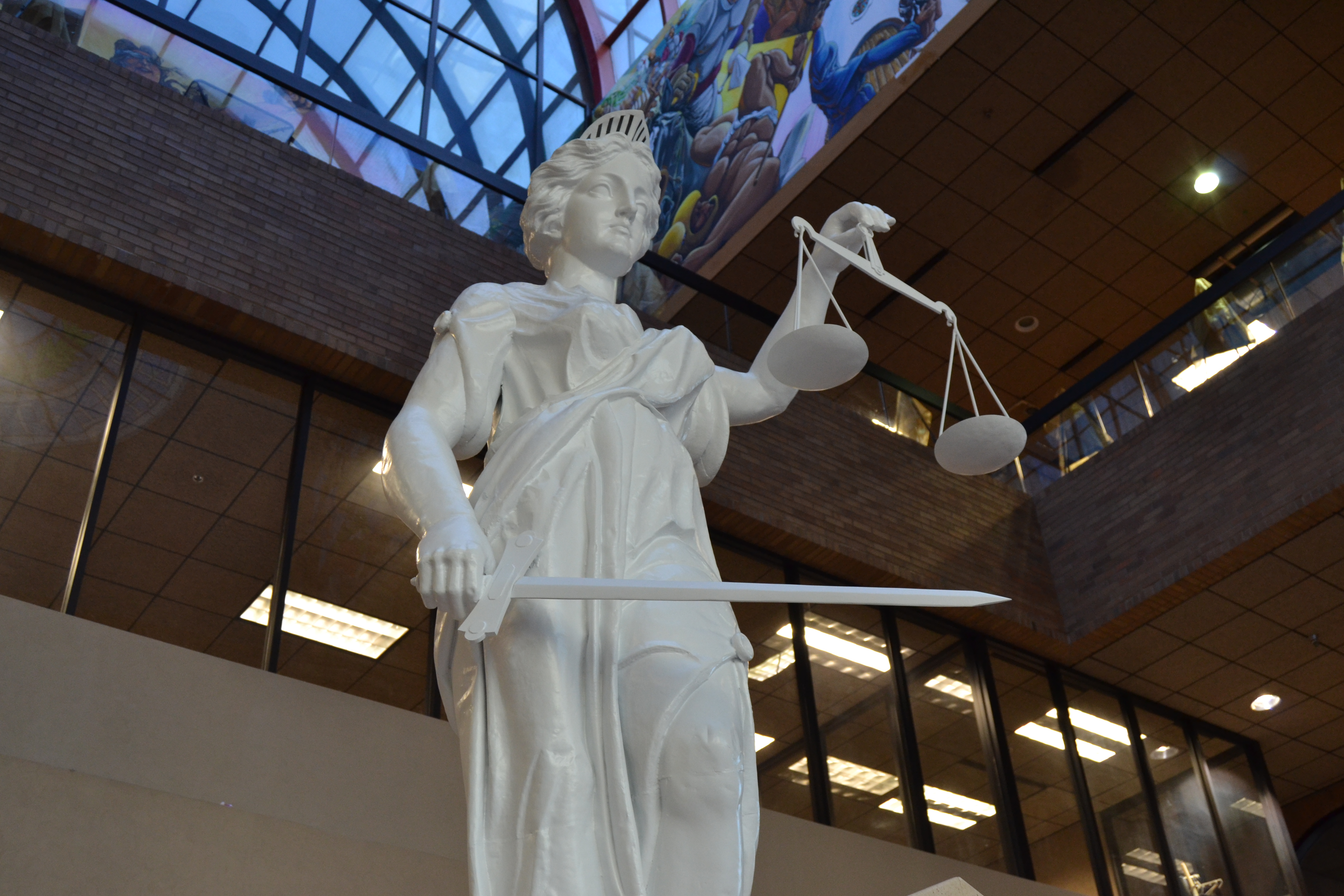 The statue Lady Justice watches over the lobby of the El Paso County Courthouse.

EL PASO – Isabel’s big plans for college and medical school were shattered when she was raped and made pregnant when she was 17. The statue Lady Justice watches over the lobby of the El Paso County Courthouse. According to the National Rape, Abuse and Incest National Network, out of every 100 rapes in the U.S., only three attackers ever serve jail time. Photo by David Chavez, Borderzine.com.

The steps she had made to accomplish her dream were planned out in her mind. She would go away to college and become the accomplished surgeon she had long aspired to be. But everything changed after she was raped by a young man who she believed was her friend.

“It left me devastated emotionally. I couldn’t believe that it had happened to me,” said Isabel, 20. She swore to herself that she would never tell anyone about the rape, but that also changed when she realized she was pregnant.

Two months after the incident, Isabel’s pregnancy forced her to report the rape to the police and she was asked to describe the attack several times in great detail. Isabel is one of about 200 persons sexually assaulted in El Paso every year, according to city-data.com, a website that creates detailed data models of subjects in the U.S ranging from crime to weather patterns. These numbers only include the rapes that have been reported to the police.

According to the National Rape, Abuse and Incest National Network (RAINN), approximately 60 percent of rapes in the U.S. go unreported. That number increases to 80 percent in borderland areas along the Texas-Mexico border such as El Paso, according to the Texas Association Against Sexual Assault (TAASA).

Change in reporting by law enforcement

The definition of sexual assault for rapes reported by law enforcement to the FBI’s Uniform Crime Reporting system changed starting in 2014. Before 2014, rape was defined as vaginal penetration of a female. Now the definition has been broadened to include males and any sexual penetration using a body part or object without the person’s consent.

Between 2000 and 2010, El Paso reported slightly more sexual assaults per 100,000 inhabitants than the yearly national average. In the two years that the city wasn’t above the average, the reported rape rate was at or close to the national average.

These statistics only account for cases that are reported to the police. The high number of unreported cases in El Paso and the United States cause the statistics to be less than accurate, according rape advocacy groups like RAINN and TAASA.

“Unreported rapes are a big problem because it doesn’t hold the rapists accountable for their actions, and the victims never get help dealing with their problems,” said Guadalupe Ortiz, direct service administrator at the Sexual Trauma and Assault Response Services (STARS), an El Paso organization.

Ortiz says the higher than average number of unreported rapes in El Paso is caused by the fear and psychological damage the victims suffer after being attacked.

“They fear that they will be judged by others and many of them don’t have the support around them to help them deal with what happened,” Ortiz said. “This usually leads many of them to keep the attack a secret.”

Ortiz also blamed the high number of sexual assaults in the borderland on the small number of prosecutions of attackers. According to RAINN, out of every 100 rapes, only three attackers ever serve jail time.

The psychological trauma and the victims’ fear of reporting to law enforcement lead to more sexual assaults going unreported in El Paso, according to Ortiz.

“Victims feel overwhelmed. They don’t want to talk about their attack at all, which they would have to do if they reported it to the police,” Ortiz said.

Mears said that the Crimes Against Persons Division that handles sexual assault cases are specially trained to investigate every report and to handle the psychological aspects of those cases.

“Our Crime Against Persons Division is trained and carefully investigates every case that gets reported,” he said.

Unreported sexual assaults are also a major problem on college campuses across the nation. According to an April 2014 report by the White House Task Force to Protect Students from Sexual Assault, one in five female college students has been sexually assaulted, but only 12 percent report the crime to law enforcement.

The report’s objective was to try to find solutions and create awareness. The report took three months to complete and was conducted by a taskforce appointed by President Obama.

The University of Texas at El Paso has investigated 17 reports of forcible sexual offenses between 2011 and 2013, or an average of four reports per year. Four cases were sent to the District Attorney’s office for prosecution and citations were given out in two other cases. There were no charges filed for the remaining cases.

“We have that Rape Aggression Defense course that we do throughout the year and other community outreach in order to help prevent these crimes from happening and to have those that do happen be reported to law enforcement,” Chavez said.

The Rape Aggression Defense Course (RAD) helps students learn the importance of reporting sexual assault, the impact it has on victims, and self-defense tactics that can be used during an assault.

Public awareness is one key step to help stop these crimes from occurring according to Ortiz and the STARS staff.

“If the public knows the impact these assaults have and feel comfortable in reporting them when they happen, I’m sure there wouldn’t be as many of these attacks,” Ortiz said.

STARS is the only agency in El Paso that is certified by TAASA to respond to rape and sexual assault victims. STARS provides an advocate for every sexual assault that occurs in El Paso. Their job is to make sure that the victims understand their rights, ensure that they are being heard by law enforcement, and provide counseling for the psychological damage they have endured.

“The victims aren’t the same person after they are attacked,” Ortiz said. “They change and are so helpless that without any support, their lives will begin to fall apart.”

Help for dealing with trauma

The psychological effects rape victims suffer can be overwhelming. According to the World Health Organization, victims of rape often suffer from depression and post-traumatic stress disorder. They are also four times more likely to contemplate suicide and 13 times more likely to abuse alcohol.

Isabel, a server at two restaurants, explained how her thoughts changed after she found out she was pregnant.

“I went from asking myself why it had happened to me to asking myself if I was going to keep the baby or not. And if I kept the baby would I even love it or just be reminded about my attack,” Isabel said.

Her struggles with the emotional after effects of the attack lasted about a year. According to Isabel, the support she received from STARS was essential for her mental health, but the biggest support she received was from her mother, who stood by her side throughout the pregnancy and legal process.

“The only reason my life didn’t go in a tailspin was because of my mom. She was there for me and never let me get down,” Isabel said.

However, many victims aren’t fortunate to have that type of support.

“I know of many victims that have to deal with their attack on their own because their family is ashamed of them or just don’t care,” Ortiz said.

Isabel decided to keep the child, a girl who is now 2 years old.

Isabel has not forgotten her early dreams and ambitions. She still hopes to pursue a career in the medical field. Although she still has nightmares from the attack, she feels blessed to have a daughter.

“When I was getting closer my due date, I was afraid I wasn’t going to feel anything for my baby,” she said. “I was afraid there wasn’t going to be any connection, but the moment I held her in my arms for the first time, I knew I loved her. I knew she was all mine. My baby girl is my life.”

Help for cases of sexual assault

The Sexual Trauma and Assault Response Services (STARS) offers the following advice for anyone who has been raped or sexually assaulted: