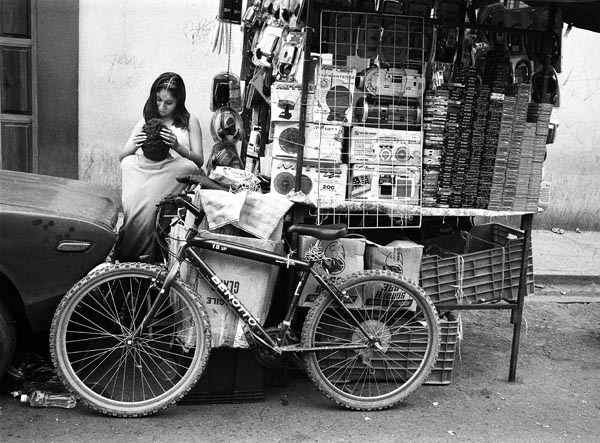 Borderzine.com, a digital publication based at UT El Paso that focuses on achieving diversity in news media, announces an exhibit of photographs by  journalism professor David Smith-Soto at the Glass Gallery of the Fox Fine Arts Center on the UTEP campus, October 23 to 31.

An opening reception of the exhibit at 5 p.m. Thursday, Oct. 23 will help celebrate the 6th anniversary of Borderzine, an award-winning web news portal and online community for Latino student journalists. Attendees will learn about the online publication’s future plans and programs, and have an opportunity to help send UTEP multimedia journalism students to news internships throughout the United States.

A celebration of photojournalism

The 24 prints from Smith-Soto’s 60-years of street photography were taken during his travels as a journalist in Latin American, European and U.S. cities.  They include images from Oaxaca, Ciudad Juarez, Guatemala, Tangier, Paris and Madrid.

Projected images by Smith-Soto’s photography students will also be on display.

“It is wonderful as I celebrate my 10th anniversary as a journalism professor at UTEP to be able to share a lifetime of photography with my students,” said Smith-Soto.

Costa Rican-born Smith-Soto has taught bilingual journalism and digital photography at UTEP since 2004. A creative writer, editor, journalist and photographer, he has served as Managing Editor of The Winchester Evening Star, Editor of El Nuevo Dia of San Juan, Puerto Rico, Latin America Staff Writer at The Miami Herald and Managing Editor of El Miami Herald. He joined the Inter-American Development Bank in Washington, D.C. in 1985, serving as Chief of Publications and Associate Deputy for Public Relations, retiring in 2000.

Smith-Soto earned a BA in English from the University of Maryland and an MFA in bilingual creative writing at UTEP.  Twenty of his photographs were displayed at the David Anthony Fine Art Gallery Photography Invitational in Taos, N.M. in 2013. He was selected that year as Featured Artist by the Literary Journal Border Senses, which used his photographs on its website and magazine. His work has appeared in newspapers magazines and periodicals, on-line and in print throughout the U.S. The photo of the Oaxacan bartenders appeared in a retrospective book published by famed American photographer Mary Ellen Mark. The show also includes a rare photograph of the Beatles given to Smith-Soto as a gift by his childhood friend, American photographer Mike Mitchell. Mitchell earned worldwide fame in 2011 when his series of photographs of the Beatles’ first U.S. concert in 1964 were auctioned by Christies auction house in New York.

The original Beatles’ print was bought for $68,500, a record price for a rock-and-roll photograph.  Entitled The Beatles, the framed 18×18-inch iconic image in a new edition printed on silver RC paper and signed by the photographer retails for $8,050 on Mitchell’s website (http://www.beatlespictures.com/).

The Glass Gallery is on the third floor room 373 of the Fox Fine Arts Center. Given the Centennial Plaza construction on the UTEP campus, the easiest access to the Center is through Dormitory Road between University Avenue and the Fox Fine Arts Center. Visitors may park at the UTEP Sun Bowl Parking Garage (contract portion) near the corner of Sun Bowl Drive and University Avenue. Here is a link to UTEP’s campus map: http://www.utep.edu/search/campusmaplarge.html