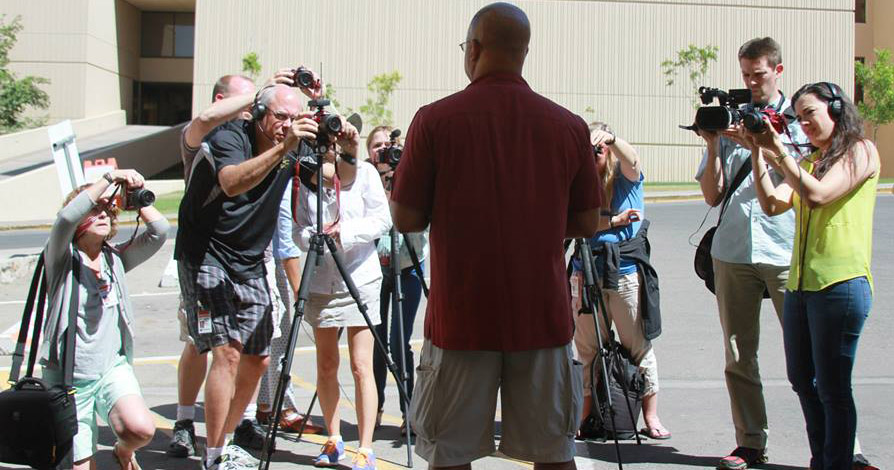 Editor’s note: This commentary is part of Borderzine’s continuing series about the growing urgency to transform newsrooms into diverse work places. The pundit who asks, “why don’t they just hire more _____,” fails to understand the fiscal constraints in which media companies operate under. Newsroom budgets continuously contract in the ever-changing new technology economy.

But even when companies do have jobs to offer, too frequently they resort to the old tried and true method of counting heads and, in the rush to fill slots with people of color, end up hiring the wrong candidate. Hiring strategies of this type often leave the truly qualified diverse candidates out in the cold. The biggest challenge facing diversity in media is changing the corporate culture.

If the hiring managers in charge of changing the workplace environment see diversity only as a societal directive to “do the right thing” then they miss the real opportunity inherent in hiring people of color: It helps increase revenue.

No one disagrees that media diversity is about being fully inclusive and representative of the communities being served.

But, because we are a results-oriented society, any enterprise that does not have a high return on investment (ROI) is doomed to fail. So, the best argument for diversity is that diversity is good for business.

One size does not fit all

As birthrates among “minority” groups continue to grow and outpace that of whites, the financial future of any United States enterprise depends on the spending strength and inclusion of African-Americans, Asian Americans and Latinos in all sectors of society.

Yet, while news executives may sit around boardroom tables and salivate over study after study about the Latino piece of the pie – 50M+ population in the U.S. with $1 trillion+ purchasing power – they can’t figure out how to get a slice.

We continue to see the few hits and many more misses of a trial-and-error strategy that is sometimes a “throw everything at the wall and see what sticks” approach. The problem with many of the diversity-driven editorial decisions is that the people leading them are not diverse themselves.

They don’t understand that there isn’t a one-size-fits-all approach to reach all of the Latinos in the United States. While the government likes to keep things simple and put Latinos (Hispanics) into one nice little box this group is anything but simple.

Latinos are separated by language (English or Spanish dominant, bilingual), by generation (foreign, U.S. born) and geography (a Latino from the West coast where the majority are Mexican born or Mexican American is very different than the East coast where the majority are Caribbean and South American). While the government likes to force them all to self-identify as Hispanics, they see themselves differently.

For example, I identify myself as a Peruvian-American. I am a second generation Latino, the son of Peruvian immigrants and I lived in Peru for some time. My experience shapes how I identify myself and that is similar and different to how other Latinos see themselves. The decision makers who draw up blueprints on how best to reach Latinos don’t see the distinction, usually because they’re not part of the Latino community and lack sensibility about our unique national origins.

“What we need are creative nimble solutions born from a workplace environment where diversity and change thrive. What we don’t need are more newsrooms where diverse employees are expected to succeed by assimilating to traditional and antiquated mainstream workplace cultures.”

Also standing in the way of workplace diversity is the prevalence of corporate cultures that stay stuck in a “this is the way we do things around here” approach. The problem with this strategy is that what got you “here” isn’t necessarily going to get you “there.”

Technology has also transformed the way news, information and entertainment is gathered and consumed. Traditional media outlets like to say they have reinvented themselves to compete when in fact they hold tightly to slow-moving, top-down hierarchies. What we need instead are creative nimble solutions born from a workplace environment where diversity and change thrive. What we don’t need are more newsrooms where diverse employees are expected to succeed by assimilating to traditional and antiquated mainstream workplace cultures.

Unfortunately, in the drive to compete on the web most news media outlets have lost the fearless independence which once held the powerful accountable and rallied a nation into action. It has been replaced instead with safe analogous content that resembles an assembly line and functions as background noise.

In reality what will lead news companies to profitable success is a multicultural workforce that’s provided with a newsroom environment where taking risks, empowerment and social commitment are encouraged and rewarded.